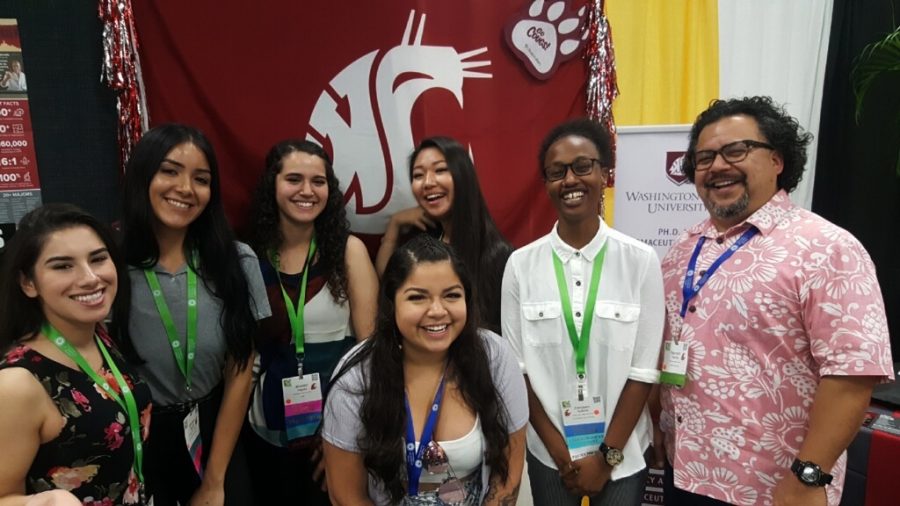 The WSU chapter of SACNAS formed in 2016 as a way for McNair Scholars to connect. Now, the group is open to all people of color interested in STEM.

WSU senior Diana Baldovinos found a family of people who share similar goals and passions within the Society for the Advancement of Chicanos/Hispanics and Native Americans in Science.

SACNAS is an organization that aims to create a community for students of color in the STEM field.

“We all face similar battles and have similar goals for the future, but we also recognize that we have our own specific experiences,” Baldovinos said. “We see each other as family, including the network of alum. We all look out for each other.”

With many of the organization’s members graduating, current members hope to reignite the passion of current WSU students to continue the legacy of the chapter on campus, she said.

Faculty adviser Raymond Herrera said SACNAS was established nationally in the 1970s, and a chapter was eventually started by a group of McNair scholars on the WSU campus in 2016.

Herrera said the community of SACNAS is inspiring to be a part of.

“SACNAS embraces the full person. In STEM, and generally, in any career path, it feels as though people of color have to check their identity at the door,” Herrera said. “What’s so great about an organization like SACNAS is that we can fully embrace and engage with who we are.”

Although the organization was founded by a group of McNair scholars, SACNAS is accepting of both undergraduate and graduate students of color who are passionate about the field of science and research, Baldovinos said.

“SACNAS also expands the STEM family and introduces people to new ways of knowing. Often, we consider the field of science to be about new discoveries, but the truth is indigenous people have been practicing science since the beginning of time,” Herrera said. “With SACNAS, we’re able to delve into these ways of thinking and share them with other people.”

Zamzam Hufane, WSU senior psychology major, said she has been involved with SACNAS for two years and has greatly appreciated her time with the association.

“In STEM, it’s not common to see groups that are predominantly students of color,” Hufane said. “I really enjoy SACNAS because it allows us to connect with other students of color who all have similar backgrounds.”

Hufane took this semester off from school, so she is not as involved with SACNAS as she would like to be, but she knows students who are still active members plan to organize events for the future, she said.

Hufane said the best way for students to get involved with SACNAS is to connect with students in the McNair Scholars Program.

“We are really trying to reignite the SACNAS chapter here at WSU, so I believe some of the students and advisers are working together to plan online events so that we are able to continue to connect with one another and get things going again,” she said.