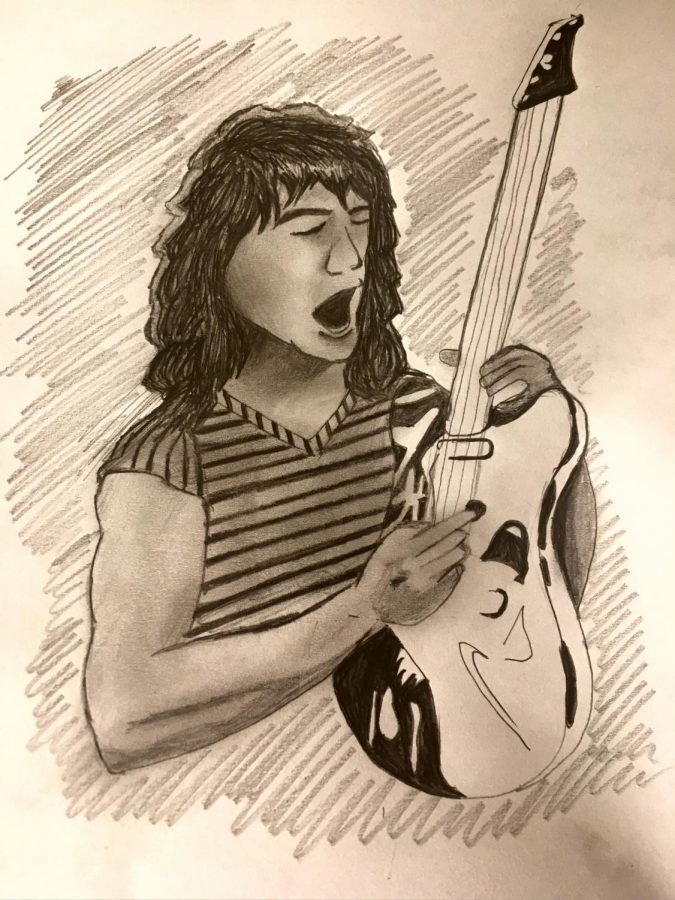 Eddie Van Halen rewrote the rules of rock and served as an icon and role model to generations of musicians.

One of my earliest memories regarding music was the lyric “You’ve got to roll with the punches to get to what’s real.” I had no idea what song it was from and did not care; it was a fun line to sing for the 4-year-old iteration of myself.

I later came to realize it was from the song “Jump” by legendary rock band Van Halen. As years passed by, I purchased “Jump” along with another Van Halen song called “Panama” on my tablet, not really knowing or caring about the technical skills or talent of the band.

When I dove deeper into my classic rock obsession, I realized that Van Halen had a seemingly endless stream of fantastic songs, dating back to 1978 and their self-titled debut album, “Van Halen.” The aspect that caught my attention was the guitar playing; I had not heard anything like it in my short time of being a classic rock aficionado.

After reading up on the band, I learned that the wizard playing the guitar was named Eddie Van Halen. He and his brother Alex Van Halen were the bands’ namesake. Songs like “Dance the Night Away,” “Summer Nights” and “Love Walks In” quickly became my mantras.

I started playing the guitar after my freshman year of high school, and after learning the obligatory “Smoke on the Water” intro riff, I set my sights to the top. I figured, “How hard could it be?” and tried to learn the classic Van Halen song “Running with the Devil” and shockingly not, I could not play it well. Coming from first-hand experience — if you are trying to learn the guitar, do not expect to nail a Van Halen riff or solo within your first year of playing.

I ditched trying to learn the song and focused on improving my basic skills on the guitar. After meeting another Van Halen diehard at school, my focus returned to learning their songs. Figuring out techniques such as tapping, pinch harmonics and tap harmonics from watching Van Halen guitar lessons on YouTube gave me the confidence to start learning their songs again.

While I did not match the dexterity of Eddie, I was able to recreate bits and pieces of some of his most famous riffs, in songs like “Eruption” and “Hot for Teacher.” I even bought a couple of Van Halen effects pedals to help my guitar emulate the sound of Eddie’s.

About a year later, I was window shopping at Guitar Center and saw a sleek black guitar hanging from the glorious guitar wall and asked an employee to take it down to show me. It was an Eddie Van Halen signature model. I plugged the guitar into an amp, and I knew it was the one. I left the store that day knowing that I had to have it.

I worked long hours and saved up until I was able to return to Guitar Center and buy it. Returning home and plugging the new guitar through my Van Halen effects pedals was my Marty McFly moment from “Back to the Future.” The sound was enormous, and most importantly it sounded like my guitar hero.

It was a shot to the heart when I opened Instagram on Oct. 6 to see Eddie’s son Wolfgang Van Halen make a post memorializing his father. Eddie had throat cancer for 20 years, but I had heard nothing of him being hospitalized or the condition worsening until I saw Wolfgang’s post.

Singers and songwriters such as Don Henley and John Mayer speak to people through their words while Eddie Van Halen spoke to and connected with people through his guitar. Van Halen was able to set emotion and tone very well through his music, and it was always the perfect complement to the music.

Seeing a ton of classic rock bands and guitar gods in concert over the past couple of years has been a very gratifying experience for me. My bucket list of guitar players to see live went down to two, and now one of those cannot be filled.

I cannot stress how important Eddie Van Halen’s music was to me, as a musician trying to follow in his footsteps, and a fan who is always in awe of his greatness.