‘I don’t need the limelight’ 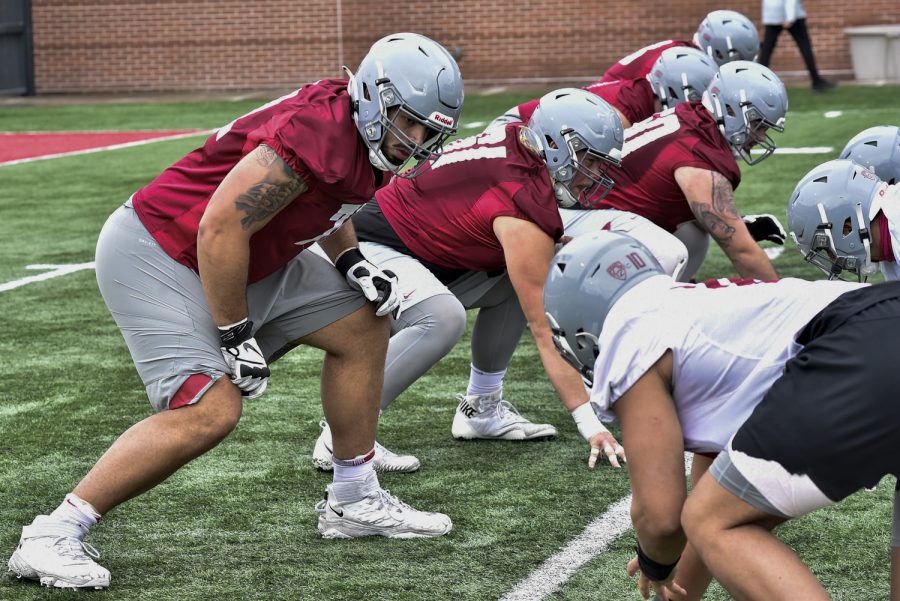 Offensive tackle Abraham Lucas prepared for the fall 2020 season opener as he lined up against his teammates on the practice field Oct. 10.

WSU offensive tackle Abraham Lucas has matched up with and beat some of the best defensive linemen in the conference in his two years as the Cougars’ right tackle.

Edge rushers from Oregon to USC know what it’s like to go up against the 6-foot-7-inch, 328-pound tackle.

Lucas has proven himself as one of the best offensive tackles in both the conference and the country because of his work ethic and motor. Aside from everything the redshirt junior can do on the field, it is something he does off the field that is the most impressive.

“Some would describe my work ethic as kind of psychotic because I don’t sleep a lot,” Lucas said.

The exact amount of sleep he gets depends on the night and the amount of homework he has, Lucas said. He has gotten as little as three-and-a-half to four hours a night.

Lucas said he has to wake up early in order to get his full amount of work in for the day. It can be hard to fight through fatigue and exhaustion, but it has to be done.

“I set the coffee pot to start making coffee at 4 [a.m.] so when I get up it’s ready and I got that, and I go about my business,” he said.

The new coaching staff has already noticed Lucas’ determination and hard work, despite being here for just a few months.

Strength and conditioning coach Dwain Bradshaw said Lucas wakes up ready to work each day, sometimes showing up even before the coaching staff.

“He gets here the same time as us. It’s like an hour and a half before training sessions even start,” Bradshaw said. “Shoot, sometimes he’ll just be waiting at the door when we’re not even here yet.”

Offensive line coach Mark Weber said he recognized Lucas’ work ethic when he stayed in Pullman to train when the pandemic shut down the offseason.

Bradshaw also was impressed by Lucas over the summer. He said the conditioning sessions during that time are tough and when he learns a lot about the players.

He said Lucas would always ask for more reps and more drills, even when his teammates were exhausted.

“When everyone’s already dead he’s like ‘Come on coach let’s do two more, let’s do three more,’ or something like that,” Bradshaw said. “Literally everybody else, they’re dying.”

Lucas prides himself on his hard work. He said it is an important part of being an offensive lineman.

Lucas’ hard work can be traced back to when he first set foot on the practice field in Pullman.

He said he struggled with some of the techniques and mental aspects of the game at first. He was underperforming and feeling a lot of pressure and expectations from the coaching staff.

“It was around that time where I just decided I could roll over or I could start really trying to put some things into practice, so I did, and I started having a turnaround,” he said. “I started winning some reps and I started learning.”

Lucas is now mentoring young team members, just like the veterans helped him when he was first starting out. He said he tries to offer as much advice as he can and be the best example.

Bradshaw said he has noticed Lucas’ tendency to take guys under his wing. Lucas stays after to work with some of the younger players on the boxing bag. Bradshaw calls it “Abe’s Boxing Club.”

Weber said Lucas has stepped up and become a leader on the team, despite his quiet nature.

“I don’t know that he sees himself as a leader, but he is a leader, and the guys look to him and that’s OK,” he said. “He’s got his own style and he leads in his own way.”

Lucas said his leadership role has changed over his Cougar career. He started out trying to soak up as much information as possible and lead by example, but now he has become more vocal.

He said he still prefers leading by example and is not the guy to give pregame speeches in the locker room.

“I’m not a pump-up speech type of person myself,” he said. “I would just fumble around, and nobody would know what I was saying.”

Lucas said he likes to listen to heavy metal music before games to get pumped up, which is surprising considering his silent demeanor.

“It’s funny, you see me being all quiet and in my ears, I’m blasting, like, Pantera,” he said.

The team aspect in football is what drew Lucas to the sport in the first place, he said. He also played basketball in high school but said he wanted to play a sport where everybody has an equal share in the success of the team.

Lucas also said he enjoys the physicality of the sport, especially on the offensive line. He said he is constantly in a position of contact on the field and would not have it any other way. Lucas also said he loves going against people just as strong as him and getting to do what he does on the field.

“The main goal of an offensive lineman is to move somebody against their will,” he said. “I think that’s a lot better than scoring any touchdowns – that’s for people who aren’t as big as me.”

Weber said Lucas has a lot of qualities akin to some of the great players he has coached throughout his decades-long career. He said Lucas has the potential to be one of the top offensive linemen in the country once he gets the hang of the offense.

“The guy is considered one of the best linemen in the country and you wouldn’t know it by talking to him,” he said. “He doesn’t act entitled. He works hard, he’s always doing extra stuff.”

Lucas said he is aware that he will not get recognized, but it does not bother him.

“I know that it’s fine with me. I don’t care, I don’t need the limelight,” he said. “I don’t need to be out there and have people talking about me and screaming my name like they screamed Gardner Minshew’s name.”