Activist talks about impact Black people with disabilities have on music, art during virtual event

Aspects of rap originated from days of slavery; Blues music influenced by Black artists with disabilities 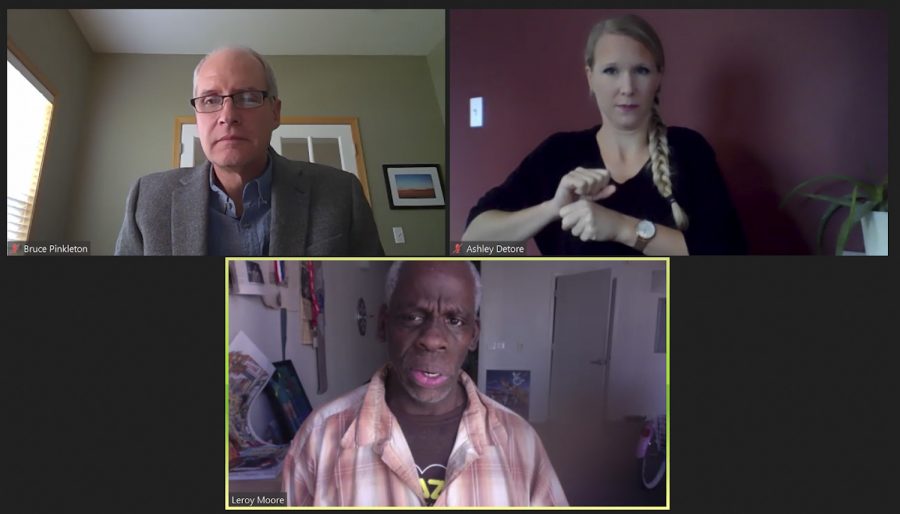 “Black disabled people have always been around,” said Leroy Moore, activist and founder of Krip-Hop Nation.

Black people with disabilities have been discriminated against long before the days of slavery.

Slaves were sold individually, unless they had a physical restriction, like a severed arm, said Leroy Moore, activist and founder of Krip-Hop Nation, during the Access Center’s virtual Speaker Series on Wednesday. In those cases, those slaves were sold in a group of 12.

This led to some slaves insulting each other, often in a playful manner, about their physical appearances, according to “One About the Origins of the Dozens,” a video that was shown during the event. These “verbal attacks” were called “the dozens,” and it was brought into modern-day rapping, especially in battle rap.

When slaves were traded, some were thrown overboard because of a disability they had, Moore said.

“Black disabled people have always been around,” he said.

There needs to be more focus on stories about the Black disabled community in school, he said. Not a lot of people are educated on this subject because very few scholars talk about their disabilities.

Moore came up with the idea of Krip-Hop Nation in 2007. The purpose of Krip-Hop is to give people in the Black disabled community an outlet for their art and music, he said.

“Krip-Hop is an international network of hip hop and other musicians with disabilities,” he said.

Keith Jones is a music producer and a co-founder of Krip-Hop Nation, who creates music with his feet because of his cerebral palsy, Moore said.

Every year, Krip-Hop Nation puts on a big event. But because of COVID-19, they put on an online concert this year, Moore said. Some of the money raised by Krip-Hop Nation is donated to organizations run by people with disabilities, he said.

One of these organizations is based in New York and serves as a home for disabled youth, he said. There is also an organization in Detroit that was founded to help serve the community during COVID-19.

Krip-Hop Nation was created with the intent of musical expression, but it has started to include pieces of art in the past few years, Moore said.

Some of the artwork done for Krip-Hop is graffiti, he said. A video called “Style Wars: Enter KASE” shows how the Black disabled community expressed themselves through graffiti.

“It’s a good thing, you know, standing up and being proud of who you are,” Moore said.