A deeper dive into Erin Kirkendall 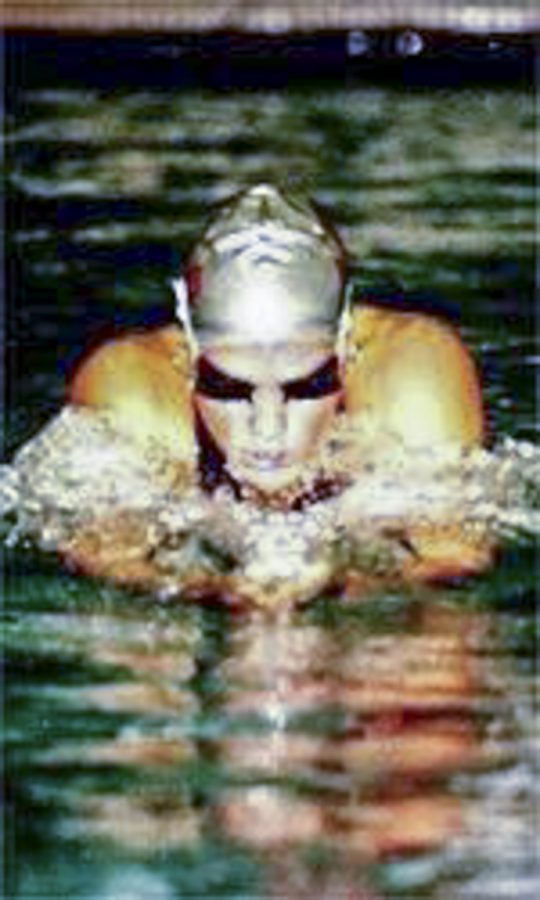 Kirkendall was inducted in the WSU hall of fame in 2016.

In order to be a Division I athlete, especially in the Pac-12, a student needs to have passion for the sport, a hunger for competition and love for their school. Former WSU swimmer Erin Kirkendall, then known as Erin Eldridge, had all those characteristics, which landed her a spot in the WSU Hall of Fame.

“I started swimming when I was 5 years old,” Kirkendall said. “When I hit high school, I started to do year-round swimming.”

Kirkendall attended Juanita High School in Kirkland, Washington. By the end of her senior season, she earned four varsity letters in swimming and a state title in the 100-meter breaststroke.

Upon her arrival at WSU in 1996, Kirkendall was humble about her achievements in high school.

“I was proud of it, but it also felt like it was kind of showy, and that’s not me,” she said.

Kirkendall won the team’s Most Outstanding Award as a WSU freshman, but she didn’t spend time celebrating this award either. Instead, she used the momentum to propel herself into becoming one of the best swimmers in school history.

Her long list of achievements would have to wait, as her sophomore season brought with it new coach Rocco Aceto, and new challenges for Kirkendall.

“We clashed a lot,” Kirkendall said. “He told me if I didn’t step up, he was going to kick me off the team.”

Coach Aceto gave Kirkendall a weekend to contemplate whether or not she wanted to continue swimming, and for a moment, Kirkendall seriously considered quitting.

In the end, it came down to her identity, and how she wanted to be remembered.

“Who would I be without swimming?” Kirkendall asked herself at the time.

Nobody knows how Kirkendall’s life would be different had she chosen to hang it up her sophomore year. Luckily for WSU, she wasn’t done in the pool quite yet.

Kirkendall claims that without coach Aceto, she wouldn’t have had an extraordinary career at WSU as she did and her situation motivated her to be the best she could be.

“Sometimes you get those special people in your life that really challenge you and can completely change your life,” she said.

Kirkendall broke her wrist in her sophomore season, but Aceto still made her swim every day. Aceto continued to push her throughout her time at WSU, despite the circumstances.

“I had to put on one of those big rubber gloves, then he [Aceto] would duct tape it up my arm, so I had a stiff arm,” she said.

It made Kirkendall a better swimmer. In fact, the lessons she learned while working with Aceto was enough to earn her recognition as the 25th best swimmer in the nation by the 1998 season.

However, the same way Kirkendall was humble about her past achievements, this honor was no different.

“I really just loved racing; a number didn’t make me feel any different,” she said.

At the end of her time at WSU, Kirkendall was a nationally recognized swimmer and had the opportunity to qualify for the 2000 Olympics, which were held in Sydney, New South Wales, Australia.

“I stayed the summer after I graduated college, and I trained with Rocco,” Kirkendall said. “The community came together to help me out with donations to be able to travel since my family didn’t have a lot of money.”

Kirkendall said she is extremely thankful for all of the community support she received. As much as she received, she also gave back.

Swimming is a grueling sport that relies on each individual to do their best to better the team. Kirkendall’s former teammate Elizabeth Schmeid said she was extremely fond of the nationally-ranked swimmer.

“Erin was always a very positive, happy person who always put everyone else around her at ease,” Schmeid said. “When she dove into the water for a race she became a fierce competitor.”

Whether it was in or out of the water, Kirkendall had an impact as a competitor and teammate. The drive Kirkendall had as a swimmer is what ultimately landed her a spot in the WSU Athletics Hall of Fame.

Reflecting on her induction ceremony, Kirkendall is thankful for those who helped get her to the spot she is in today.

“It was the coolest experience, and part of it was because my husband and kids were there,” she said. “Having my kids get to go to WSU was amazing, they loved it, and that made it that much more special.”

Kirkendall’s achievements include the team’s Most Outstanding Award three years in a row, varsity lettering three times, breaking previously held records for breaststroke and fighting for a spot to compete in the Olympics.

One of Kirkendall’s biggest takeaway from her time a WSU was her love for travel.

“I took my love for travel, and my husband and I did a 10-month around-the-world motorcycle trip together,” she said. “We drove 30,000 miles, 30 different countries.”

Kirkendall said her only regret from her time at WSU is wishing she had lived in the moment and documented more. She is now a real estate agent in Tacoma, where he uses her love of travel to help others find a home.

Her legacy at WSU is still a strong one, and Kirkendall’s name still stands out in the WSU record books.