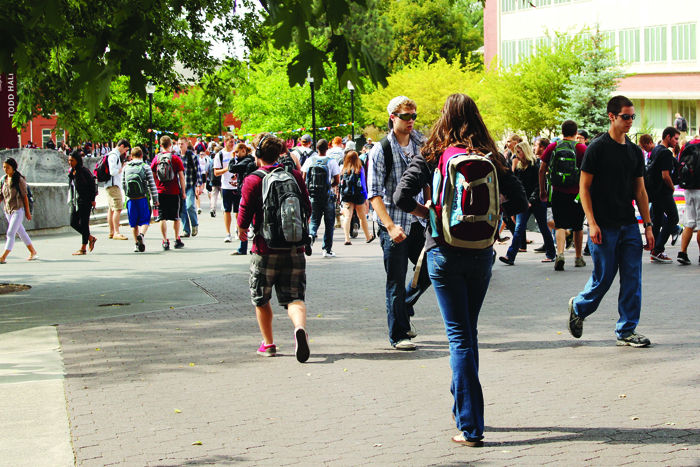 The later spring semester start date is designed for WSU to stagger the move-in dates of students living on-campus in Pullman.

The pandemic has created many disruptions to normalcy, including what the virtual spring semester will look like for students. Official changes include the cancelation of spring break and a delayed start date.

Faculty Senate voted to eliminate spring break next semester and instead have a series of one-day academic breaks throughout the semester during an Oct. 8 meeting

This decision was made to limit potential non-essential travel, and protect student and community health, said Phil Weiler, WSU vice president for marketing and communications.

The academic breaks are scheduled for Thursday, Feb. 25, Wednesday, March 17 and Tuesday, April 13, according to an email sent to students Oct. 15 from WSU President Kirk Schulz and Provost Elizabeth Chilton. Classes will also be canceled on Presidents’ Day, Monday, Feb. 15.

“That is just not enough for a mental health break, and it will probably end up being just a catch-up day for most students,” Cohen said.

He said he hopes faculty will respect those breaks for what they are and not make assignments or projects due on those days.

Cohen said he’s upset the university did not seek more student input prior to making the decision regarding spring break.

“At the end of the day, if it’s not for the students, the university would not exist in the first place,” he said.

Spring semester will start Jan. 19, instead of the originally planned Jan. 11. The later start date is designed for WSU to stagger the move-in dates of students living on campus in Pullman, according to the email sent to students.

The other reason for the delay is because of a potential wrinkle with the U.S. Department of Education, Weiler said.

“Currently, the Federal Department of Education is allowing colleges and universities to teach virtually, and students can still receive their federal financial aid,” Weiler said, “but that exemption for virtual teaching expires at the end of the calendar year.”

The extra week before the start of spring semester allows the university some time to make modifications to bring all classes face-to-face should the Department of Education not renew the allowance for virtual instruction, he said.

Weiler said he does not expect there to be a problem with the department’s renewal.

If the department does renew the allowance, spring semester classes will be held virtually, according to the email.

While almost all classes are online, a greater number will include a face-to-face aspect than in the fall semester, Weiler said.

Instructors had the opportunity to fill out a request for an exemption and roughly 60 were approved for the spring, he said.

“These are primarily laboratory classes where you actually have to have hands-on equipment, specific pieces of equipment, and you can’t do it virtually,” Weiler said.

In-person classes will follow strict health and safety protocols, including wearing masks, physical distancing and limiting the number of people in a class to 10 or fewer, Weiler said.

More information on spring housing, student fees and COVID-19 testing plans for students and employees will come in November, he said.