Stalking incidents on campus increased, according to annual clery report 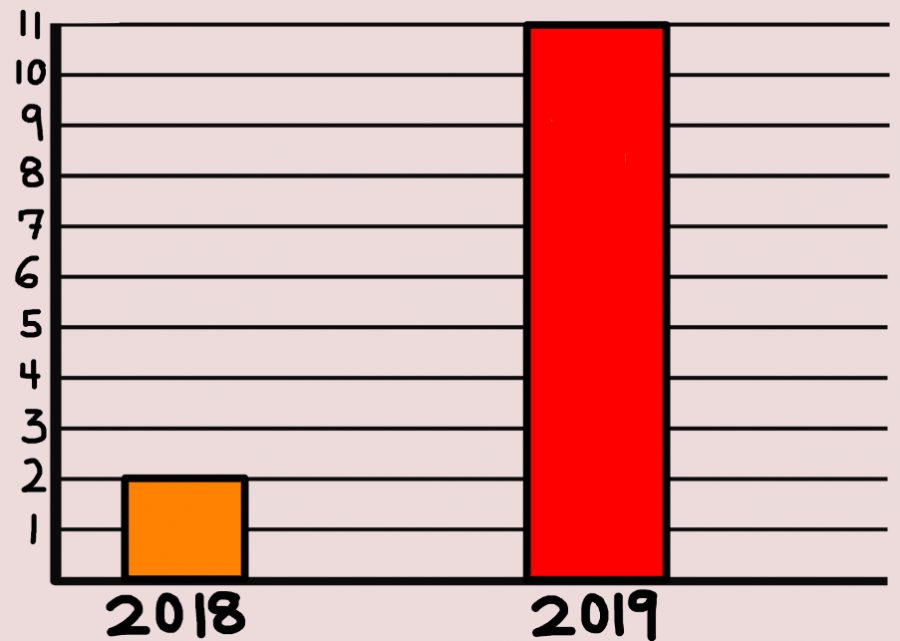 The Clery report found that eleven stalking incidents were committed on campus housing, an increase from the two incidents reported in 2018.

Universities are required to compile and calculate a Clery Report every year after the Clery Act was passed in 1990. The act, which is named after Jeanne Clery, who was sexually assaulted and murdered in her dorm, also mandates universities to outline campus safety and violence prevention efforts, according to the Clery Report.

“A report of stalking qualifies as any two acts of unwanted advancement of any kind,” said Mike Larsen, captain of the WSU Police Department. “These acts could be anything that makes the reporting party uncomfortable, including unwanted texts or phone calls.”

Larsen said he could not see a pattern in the stalking incidents that would explain the increase in reports. Crime rates change from year to year, depending on how the crime is categorized, he said.

The number of unfounded crimes increased from six to 10 in 2019 from the year prior.

An unfounded crime is any crime that is dismissed based on insufficient evidence from the police report, Larsen said.

“Oftentimes, when a reported crime is classified as unfounded, it is based on the evidence available at the time of the report,” he said.

The majority of unfounded reports are from relatively mundane origins, he said.

“Most unfounded reports are made when a person comes back intoxicated from a sports event and can’t remember where they parked,” Larsen said.

No arrests were made for robbery or aggravated assault in 2019, according to the Clery Report. Ten reports of burglary were made in 2019, matching the 2018 burglary total.

Four more alcohol arrests and six more drug arrests were made in 2019 than 2018, according to the Clery Report. Sixty-seven individuals were arrested for alcohol violations and 32 for drugs in 2019.

Only two fires were reported in 2019 on on-campus residences, according to the Clery Report. Both were kitchen fires in WSU-operated student apartments: Valley Crest Apartments and the Nez Perce complex. Minimal damage was caused by the fire.

The decrease in fires is a step toward bringing the number of incidents to zero, said Darren Jones, WSU PD fire and safety compliance officer.

Most fires occur in apartment complexes, he said. This is because the majority of fires on campus start in kitchens, which most dorm students do not have immediate access to.

In order to prevent fires, students who rent on-campus apartments should buy renter’s insurance and a fire extinguisher.

“Not only are you protecting yourself, but in the event that the unit next to you catches fire, you’re not left hanging out to dry,” he said. “Secondly, get yourself a fire extinguisher and learn how to use it … you can get control of the situation before it’s out of your hands.”

Students can file a formal complaint with the WSU PD or the complaint can be settled without involving police, said Holly Ashkannejhad, director of WSU Compliance and Civil Rights and Title IX coordinator.

Students can also go to counseling. In some cases, punishments coming from a complaint can be agreed upon by the victim and the offending party, she said.

“If you have a concern relating to a crime, there will be information from an annual report and procedures at your institution on who you can report to,” she said.