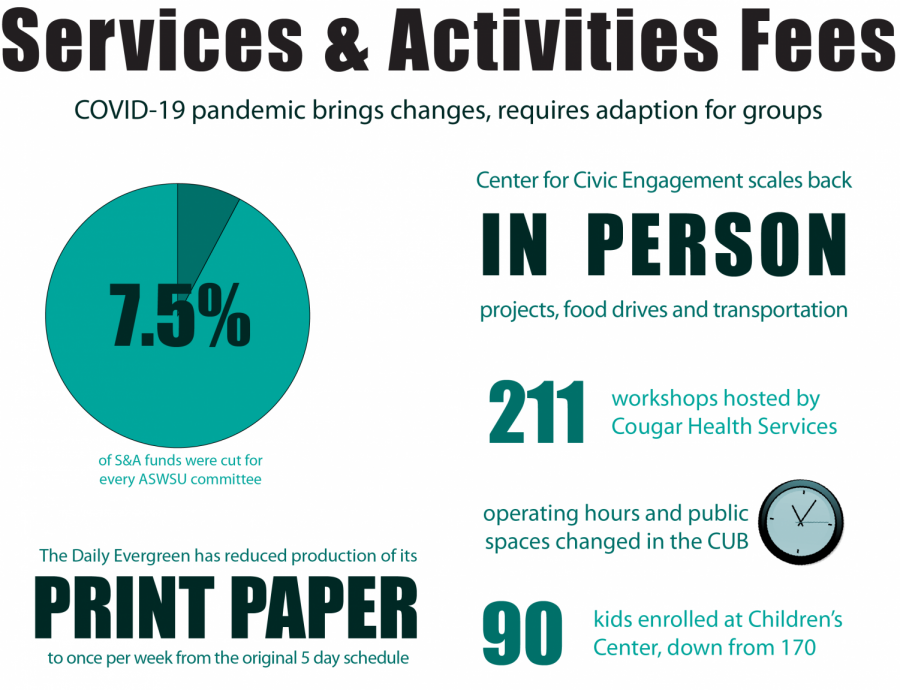 Services and Activities Fee Committee members will decide if on-campus groups will receive a reduction in their allocations for the 2020-2021 fiscal year because of overall budget cuts caused by the COVID-19 pandemic.

ASWSU and GPSA are collecting student comments about S&A fees on social media. These comments will be collected and read during the committee’s meeting today at 4:30 p.m. via Zoom.

On Sept. 13 and 15, the committee heard presentations from on-campus groups that receive S&A funding. Each group shared how the COVID-19 pandemic has affected their operations and programming, as well as how they have adapted and used S&A money for online programs.

The Access Center has continued to offer alternative testing accommodations and other resources to students during the pandemic, said Mikayla Beckley, vice president of Disabled Students and Allies Club.

The center is also offering more online programming, specifically through events like the Disability and Intersectionality Speaker Series. About 150-300 people attended each event in the series, with over 400 total views afterward, Beckley said.

To make the events accessible, the Access Center is spending money on captioning and interpreting services, she said.

The center saved money this fall because they did not hire a disability awareness intern, which is usually a paid student position, Beckley said.

The ASWSU Executive budget is used for COVID-19-related programmings, such as the “Wear a Mask” campaign and COVID-19 care packages that are sent to students, said ASWSU Executive Assistant Soho Divers.

Travel costs associated with executive travel and the Cougar Leadership Retreat have been reduced, Divers said.

Many programs are being held online this semester, she said. Some groups have followed COVID-19 restrictions and hosted safe in-person events.

SHAPING, CASHE, VIBES are all multicultural events that will be online, McCoy said. Some have not happened

Every committee took a 7.5 percent cut last semester, she said, but it was left to the committee’s discretion where that money was taken from.

The ASWSU Senate has 21 senators representing each academic college, said ASWSU Pro Tempore Bailey McCoy. Each senator is paid by a stipend.

The senate budget was cut by 7.5 percent last semester, McCoy said. To address this, senators received reduced stipends, which has not been an issue.

McCoy said it is difficult for new senators to learn their jobs while being online.

The majority of Athletics’ events have been delayed to late fall or early spring, she said. There will be an increase in student workers when those events begin.

Athletics is facing a significant loss of revenue because of canceled and delayed events, she said.

The money — around $30,000, allocated in Athletics’ budget for band travel is now being used for student salaries, said Matt Kleffner, senior associate director for WSU Athletics.

Athletics has paid $75,000 for student wages so far this fiscal year, he said. Student workers are paid minimum wage.

The Center for Civic Engagement had to scale back in-person projects, food drives and transportation to service events due to the COVID-19 pandemic, said CCE peer mentor Gabriela Ramirez.

Instead, the center is offering more online opportunities for engagement, such as Public Square discussions, virtual office hours and YouTube tutorials about community service, Ramirez said.

Last semester the S&A fee committee denied the CCE a one-time request of $25,000 for a new vehicle, she said.

Most of their S&A money is paying staff and student wages, as well as incidental expenses related to being online, Braun said.

More students seem to be engaging outside of the Palouse because they are getting involved with community service in their hometowns, Ramirez said.

The Children’s Center has moved expenditures between categories due to COVID-19, said Executive Director Brenda Boyd. For example, travel money has been reallocated to staff training.

There is only one student on staff, so the student wages portion of the budget was reallocated to pay for civil service staff, Boyd said.

The center normally has about 170 children enrolled, but there is only space for 90 due to COVID-19, said Director Heather Mac Dermott-Havey.

The Coalition for Women Students operated under the Women*s Center and has seven active RSOs, said Kaitlin Srader, representative and chair for the coalition.

They recently added a new RSO called FemScouts, which has 12 members, she said. They learn about different aspects of social change and use it to help their community.

The coalition also began an online magazine called the Harpy*s Magazine, she said. The first issue will be published virtually Nov. 9.

Their programs are now be held online, Srader said. This includes events like Happy Hour and speaker series. Having virtual events has reduced their costs.

They are not recruiting as many members because of the lack of face-to-face interaction during events like Week of Welcome, she said.

They had an eight-hour virtual retreat and spent no money on it, she said. They are also saving costs for Cougar Safe Rides. They are now using the cars to help with food delivery.

This was done because there are not a lot of students on campus, said Gabby Rodriguez, operations supervisor of Transportation Services. There are now only a few riders total.

They have also implemented safety measures like wearing masks, limiting one rider per vehicle and increased sanitation, he said.

They expect to have a positive balance of about $12,000 by the end of the fiscal year, Shaheen said.

Cougar Health Services increased the number of workshops it facilitates, said Elise Johnson, CHS representative and student employee. They have hosted 211 workshops with a total of 4,541 participants.

CHS is focusing on mental health and COVID-19 prevention, said Mikaella Estoque, CHS representative and student employee. All programs moved online because of the pandemic, including “Coping with COVID” workshops.

The number of students with mental health problems has increased because of the pandemic, she said.

The Cougar Marching Band is not able to perform in person because of the pandemic but they are working on virtual performances, said Troy Bennefield, director of Athletic Bands.

The band is rehearsing during Zoom, but this can be difficult, he said. This is because of equipment and lack of instrument access.

“I haven’t had band rehearsal since the spring,” Bennefiled said, “and that is an odd thing.”

Band members submit videos of themselves playing for assessment and for recordings, which will be produced into full virtual performances, he said. The band is recording WSU’s Fight Song so it can be used by the university.

Seventy-five percent of the band’s budget is funded by S&A, he said. This funds members’ instruments, uniforms and stipends.

The stipends that members receive have been reduced, he said. Before the pandemic, stipends were $200 for freshmen and up to $500 for seniors. Now, stipends are between $50-$250.

The band is saving money from travel and food expenses, he said. They also reduced costs for uniform cleaning and instrument maintenance.

They are buying personal protective equipment like specialized masks. Attire remains their most expensive expenditure, and they are paying for everything they purchased last year.

The band also has a reduced number of new members. Drumline does not have any new members, said Ivanna Garza, Cougar Marching Band member.

The Compton Union Building is not holding events because of COVID-19, said Desiree Mercado, CUB representative and student employee.

The way the CUB is used has changed, he said. Students are staying at the CUB longer, usually for individual class or study time. RSOs have to go through a process to be allowed back into the CUB.

The CUB lost revenue that is usually generated from events and vendor sales, Mercado said.

They have also reduced their support staff, which are employees that usually help with events, Navarrete.

They have saved around $180,000 in wages, but this is not sustainable because these expenses must be paid when events can be held again.

The CUB also has fixed annual fee expenses that it cannot reduce, Mercado said. This includes salaries and maintenance fees.

The Graduate and Professional Student Association are providing virtual social and professional development events this fall because there was a decline in involvement over the summer, said GPSA Vice President Samantha Edgerton.

The GPSA budget was adjusted for decreased attendance, Edgerton said.

The Student Entertainment Board usually hosts around 350 events a year, said Pomy Ayele, director of concerts for SEB.

All events are now online, said Maddy West, Up All Night director for SEB. This includes Cougfest with Rico Nasty, Netflix Parties and guest speakers.

More students have attended their online events this semester, she said.

SEB reduced their staff by two positions, she said. Online programming is less expensive, but does not bring in revenue like in-person events, West said. They also saved money by eliminating things like not printing posters.

The amount of money SEB saved helped them get popular figures like Rico Nasty and David Dobrik for events, she said.

The Leadership Center in Student Involvement is not hosting in-person events, which saves money on expenses such as food, said Kaye Gill, director of the Cougar Leadership Team. Instead, they now have to pay for online platforms, such as Coug Presence, formerly CougSync.

Krieger said Student Involvement is under budget from where they were last year. This is because they are missing crucial employees, such as the assistant director of the Cougar Leadership Team.

The Office of the Student Media has about 40-100 paid student workers a year, said Angelica Relente, student media representative and editor-in-chief of The Daily Evergreen.

The office’s media has three pillars: S&A fees, student fees and ad sales revenue. Sales revenue has fallen around 69 percent since the pandemic began, she said.

The office reduced print publication of The Daily Evergreen from five days a week to one, but articles are still being published online every weekday, Relente said.

The amount of print days has changed but the production of content has not, said Richard Miller, director of the Office of Student Media.

The office also reduced the number of workers in the advertisement department and will not be hiring a content advisor or replacing the company car, which was totaled last year, Relente said.

The Chinook Yearbook is reinventing itself because the events it usually covers are no longer happening because of the pandemic, she said.

The Daily Evergreen had 48,549 visitors on its website in September and 106,160 page views, Relente said.

The program is funded by S&A and the Student Transit Fee, which requires full-time students to pay $25 every semester.

Transit service to and from campus has been reduced because of the pandemic, said John Shaheen, director of Transportation Services. They have implemented safety measures like limited bus capacity, requiring masks and increased sanitation.

“We’re pretty fortunate to have as robust as a bus service as we do,” Howell said.

The program expects to maintain limits on bus capacity and reduced service to and from campus during spring because classes will remain online, he said.

More than 300 students are employed every year at the UREC, he said.

All outdoor courts are open to the public, she said.

Team sports competition is restricted because of the pandemic, Hunt said. They are adding more sports that can be played while maintaining social distance like pickleball and table tennis.

Wages for indoor and outdoor recreation were reduced, said Christian Anderson, UREC representative and chair of the UREC board. They are charging registration fees, but those revenues have also gone down.

Day one and day two of the S&A meetings can be viewed via Zoom recordings.