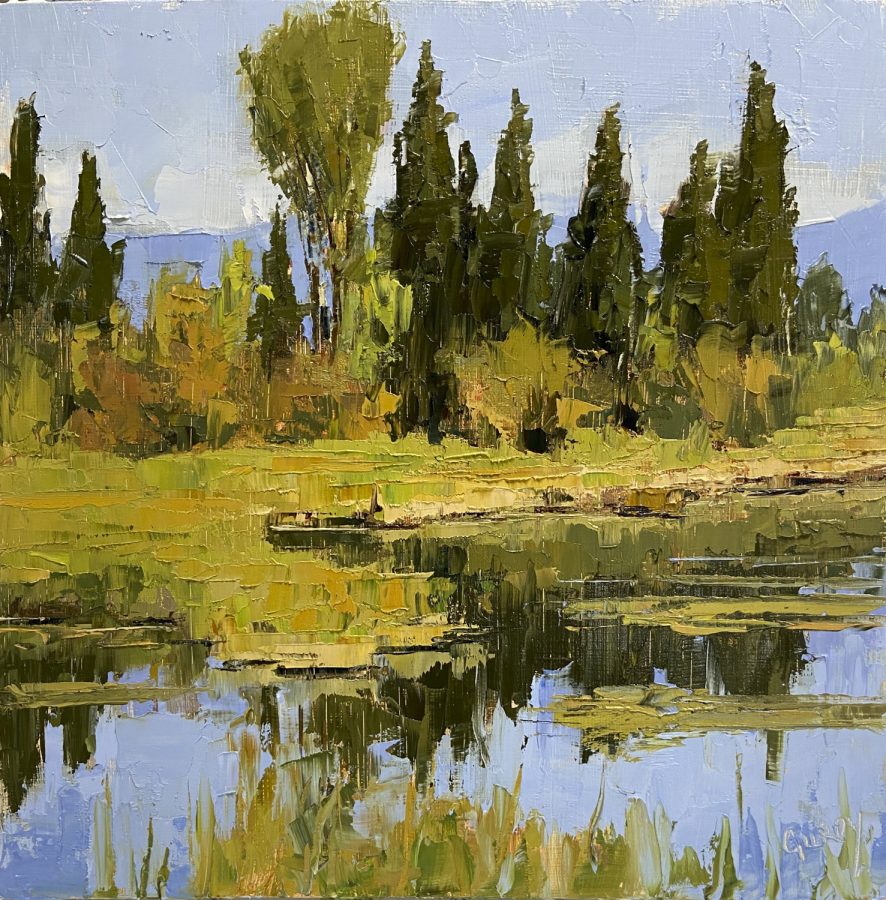 'Sunlit Marsh' by Denise Gilroy was the winning painting in this year's contest.

The first place winner of the Palouse Plein Air painting competition was Denise Gilroy, an oil painter from the Sandpoint, Idaho, with her painting ‘Sunlit Marsh’. She said she often uses her plein air paintings as inspiration for larger pieces. In the studio, she is able to recreate what she found attractive about a scene on a larger scale.

“My favorite thing in the world is being outside and watching everything that is happening,” Gilroy said. “I like the solitary aspect.”

Artists from across Idaho and Washington took to the outdoors to create beautiful scenes to submit for the competition in Moscow, Idaho. “Plein air” is French for “in the full” or “open” air, and is a technique that requires artists to work outside directly on the scene.

“It is a form of art-making that highlights direct interaction with the subject,” said Megan Cherry, City of Moscow arts program manager.

The event is now in its 11th year and was created by Aaron Johnson, a painting professor at the University of Idaho who specializes in the plein air technique. Johnson, like many others, has a passion for the landscapes of the Palouse, so it seemed a natural fit that Moscow would be at the center of a plein air competition, Cherry said.

Second place winner Bobbi Kelly keeps an eye out all summer long for prime areas to capture through her watercolor skills; however, Kelly’s paintings are not simply a copy of the scene. She believes that watercolor is as much a thinking medium as it is a painting medium.

“It might be something that nobody thought was important … but [capturing certain scenes or objects] can make people realize that art may be in more places than they think,” Kelly said.

Like so many other events, the competition was slightly altered because of the pandemic; however, this also gave the Moscow Arts Commission time to brainstorm solutions.

“It was really exciting to find creative adaptations that we could use to deliver Palouse Plein Air,” Cherry said.

The biggest change this year is that the competition was completely virtual. Another difference is that the artists would typically have their canvases stamped by the city arts council to verify authenticity. Instead, this year they were able to submit on-site photos of their work in front of the scenes. Although there was no physical exhibition this year, all of the art can be viewed in the online gallery, along with the on-site photos.

“It is important for us to serve the community with creative ways to connect during this year,” Cherry said, “We did our very best to create a sense of community and a sense of connection despite the fact that this is a tough time.”

The artists also faced challenges while working during these difficult times.

“It’s a very solitary existence – what I do,” Gilroy said. “Given that I’m alone all the time, I still had a hard time with the pandemic. It is not that my life changed substantially, I think it was just the idea of what was happening and the uncertainty of where it was all going to go.”

While some changes may have presented issues for artists, the competition still allows artists to capture their individual and unique visions of nature, which they can then share with the community.

“I don’t ever want to duplicate nature in its entirety; I think painting is interpretation,” Kelly said. “I like to think that it gives people something to think about.”

The plein air competition occurs every year and is open to everyone 18 and older. Registration for the competition normally opens up in the early summer months.