US should accept refugees with open arms 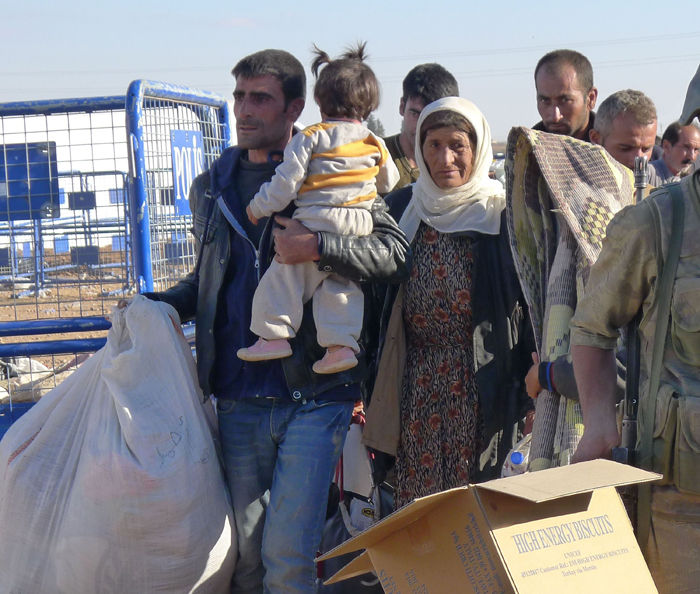 Kurdish refugees arrive in Yumurtalik, Turkey, fleeing the advances of Islamic State extremists on the north Syrian city of Kobani. The U.S. has a responsibility to help global refugees.

America must not idly watch as the outstretched hand of the Statue of Liberty, which Mother of Exiles originally designed in the image of Arabian peasants, falls worthless into the mire of New York Harbor. Western nations must offer their own hands to the aid of those refugees fleeing war.

Refugees are currently fleeing north from war-torn countries such as Syria and Iraq in numbers larger than any since the disastrous migrations following World War II, which once resulted in millions of European deaths.

But as Middle Eastern refugees reach the relative havens of Western nations, abusive public response and the deadly slowness of bureaucracy are sowing tensions, and even have some migrants returning home to at-risk families they could not send for.

Just as the historic forced expulsion of Germans saw death tolls climb as a result of migrant rejection by every country they traveled through, so too do refugees find themselves traveling through and around countless environments of varying conditions and public attitude.

It is to the great shame of the U.S. Congress that refugees are not being accepted with open arms, particularly when it has a singularly immense capacity to alleviate the burden of its allies and the suffering of the innocent. Given the U.S.’s recent willingness to destabilize and invade the region – at times with the purported goal of championing democracy – it is the height of hypocrisy to then be unwilling to take in those migrants who want a shake at just such a system.

Yet America is not alone in its shame. The European system resulted in more refugees heading toward Iraq, a similarly unstable and terrorized country, than any particular European country. Still, almost a million refugees have made the journey north so far this year.

Complaints that migrants should be more heavily assisted by regional countries are uneducated. Those migrants traveling by land to Turkey or Lebanon, which share a border with Syria and have jointly taken about three million refugees, tangibly see that both countries are at a breaking point. The impact on Lebanon is most apparent, as the small and economically welterweight country’s population has increased by a staggering 25 percent due to the influx.

Many travel further west, where refugees are either met with the similarly burgeoned infrastructure of Greece, whose Mediterranean islands are seeing thousands of new arrivals every day, or with a nation whose government and populace are anything but welcoming.

Traveling north, many refugees have passed through Serbia on their way to Hungary or Germany, but Hungary’s Trump-esque reaction has been to create a wall lined with armed guards. It has become internationally famous during the refugee crisis for its use of force on migrants at border crossings and viral videos of the mayor of Ásotthalom threatening anyone who crosses illegally.

Even countries such as Sweden, which has played an exemplary role in the crisis by opening its application process to any refugee who can make the 2000-mile journey to its borders, has struggled with domestic terrorists who have chosen to reject immigrants.

Half a dozen separate cases of arson have targeted refugee centers this year, according to Russian news outlet RT, a practice which has a paradoxical prevalence in those Nordic countries which have been most lenient in their immigration policies.

The combination of these terroristic hate crimes and restrictive wait times on family-reunion policies has convinced many in Netherlands’ refugee centers to start the trip home to support their families, according to the Dutch newspaper Telegraaf.

This is extremely telling of the impossible decisions these migrants must make, considering the harrowing journey they had to make to reach the northern regions of Europe.

The long-term effects on international relations may well be devastating, as increasing attacks on migrants and governmental disinterest polarize those denied their near-globally recognized right to seek asylum. The reverse may similarly prove true if the current direction of international immigration policy significantly changes.

A recent article by the Atlantic posits that accepting and resettling all incoming refugees would both be cheaper and more effective at quelling ideological power of ISIS than either the West’s current military campaigns or a full-scale war.

There is also the question of morality. Groups like ISIS are telling the region they are a better alternative than the moral insidiousness of the West, which it says only promotes ideologies through bombs. Surely the most effective way to champion freedom is to provide amnesty.

Emry Dinman is a junior communication major from Seattle. He can be contacted at 335-2290 or by [email protected] The opinions expressed in this column are not necessarily those of the staff of The Daily Evergreen or those of the Office of Student Media.