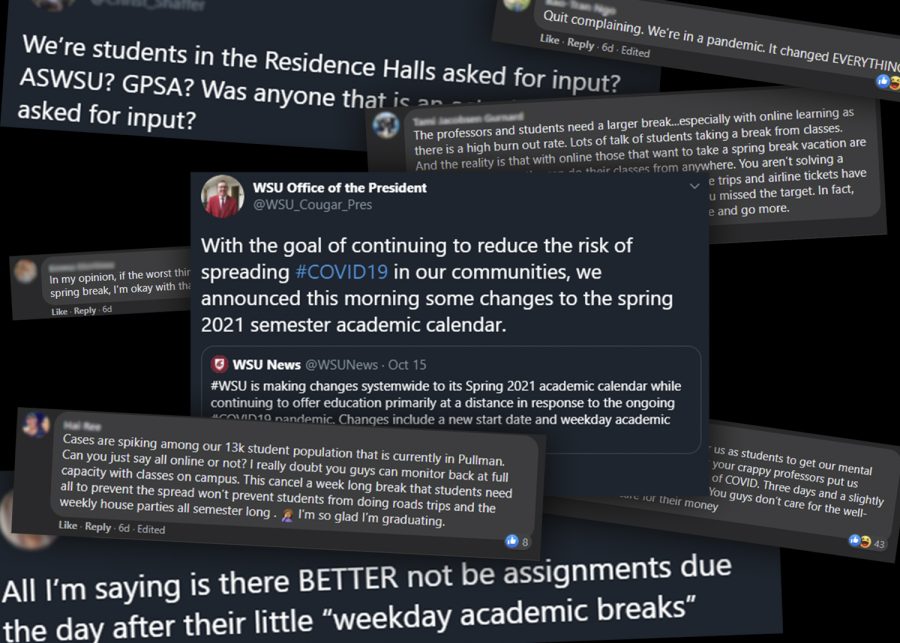 WSU announced last week that there would be no traditional spring break this year. The announcement experienced mixed reactions across social media, with some approving of the decision and others criticizing the administration’s lack of communication with students.

WSU’s decision to modify the schedule for spring semester has left many students feeling displeased with university officials.

“I push 18 credits a semester,” said Christian Shaffer, senior double major in pre-law political science and philosophy. “I’m definitely going to have things to do on that [one-day break]. It’s not going to be a break.”

The semester will start on Jan. 19 and will include four additional days without class under the new schedule, said Phil Weiler, WSU vice president for Marketing and Communications.

The decision to start the semester later than originally scheduled was due in large part to medical experts predicting another wave of COVID-19 infections from late autumn to early winter, Weiler said.

Weiler also said the decision was made through shared governance, in which the administration makes the final decisions, but also seeks advice and counsel from faculty members.

However, various student organizations usually involved with school policy said they were uninformed as to what was going on.

“[ASWSU] typically have monthly meetings to discuss policies that the administration is working on,” ASWSU President Curtis Cohen said. “Unfortunately, this one was not brought up early enough … so before the decision was made, there was hardly any student input.”

ASWSU senators previously made a statement that urged WSU Faculty Senate to re-evaluate its vote to cancel spring break, according to a Daily Evergreen article. They were concerned about stress and Zoom fatigue.

James Dalton, GPSA vice president of Legislative Affairs, said he was not opposed to the decision made by the WSU administration, but students have a right to be consulted in matters of their own health and safety.

The biggest concern throughout the decision-making process was that spring break is meant to be a break, said Elizabeth Chilton, WSU provost and executive vice president. The greatest consideration, though, was that of public health.

Chilton said WSU is considering requiring students who live on-campus to undergo COVID-19 testing when they arrive on campus at the beginning of the spring semester. Spring break would require those students to be tested again when they return.

Wack said there were two main ideas behind the dates. The administration wanted the dates to be spread out throughout the semester to provide a break at least once a month. They also wanted the breaks spread out over the days of the week, so as not to discriminate against any class schedules, Wack said.

Chilton said she will work with faculty to ensure that instructors do not assign due dates on the days following these breaks.

Some students said they are not convinced these measures will be enough to offset the added stress.

Shaffer said he does not see how the plan will be effective. A lot of reading material and homework remains constant throughout the week, regardless of the due date, he said.

He said he was concerned about the isolation students will face without an extended break.

“We’re taking the companionship out of it,” Shaffer said. “We’re taking students away from the engagement of being in college and putting them in a cold, dark scenario where they’re just focused on school with nothing to look forward to.”