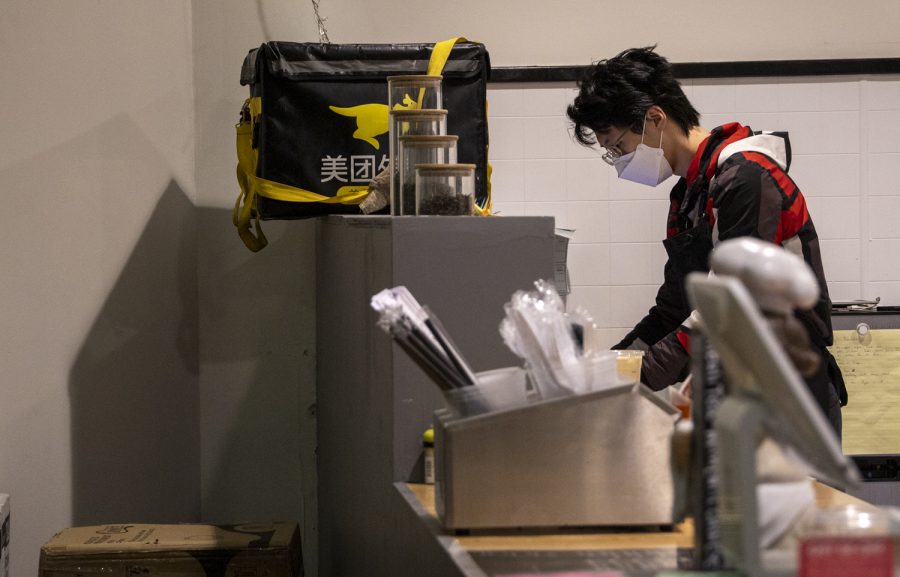 RealiTea in downtown Pullman implemented guidelines to prevent COVID-19 from spreading, including having customers order at the front door of the store.

After months of dark windows and an empty restaurant, the RealiTea owners are looking ahead to brighter days.

The boba shop in downtown Pullman reopened their doors at the end of September after almost six months of being closed because of COVID-19 restrictions.

Manager Zenna Glaser said the owners revamped the menu and made changes to management. Store hours were adjusted to shorter business days from 2 p.m. to 8 p.m. every day.

“We’re trying our best to stay open and keep providing service for those who come in,” she said. “We want to have a place where WSU students can hang out and even have a job.”

Some menu items that were not selling well were removed, while new items were added, like Korean fried chicken and honey butter fried chicken, Glaser said.

Glaser started to work at RealiTea last year but was promoted to a store manager when the shop reopened. She is currently a student looking to transfer to WSU.

Most of RealiTea’s staff includes WSU employees, Glaser said. They currently employ eight staff members. Their team is smaller since they have reopened. Fewer employees returned for their reopening but business has been slower, reducing the need for more staff.

RealiTea manager Tianen Liu is in the process of becoming an owner. He has worked at the business since their reopening. The business is expanding ownership to Liu because three of their four past owners moved back to China, Liu said.

Liu is a WSU alumnus and was classmates with the founders of RealiTea, including Zhibo Ren, Yiran Xu and Candy Zhong.

To remain safe amidst the pandemic, customers are only allowed in one party at a time, and they order at the door so they hardly enter the store, Glaser said.

“Reopening has been a little challenging since we’re trying to stay on the safe side and avoid dine in,” Liu said. “It’s been a slow opening, which we had expected.”

New customers have been coming in and are excited to see another store in downtown Pullman that has reopened, Glaser said.

“We’re down a little bit, sales-wise, because a lot of our customer base is made up of international students, and a lot of them have left,” he said.

The owners, managers and staff are a close-knit group because of the small business environment. She said she is excited about what is to come for RealiTea like new Asian menu items.

“We love working in Pullman because of the young, energized customer base,” Liu said.