A team inspired by one swimmer

Junior Bokowy is known by her team as someone who is accountable in, out of the water 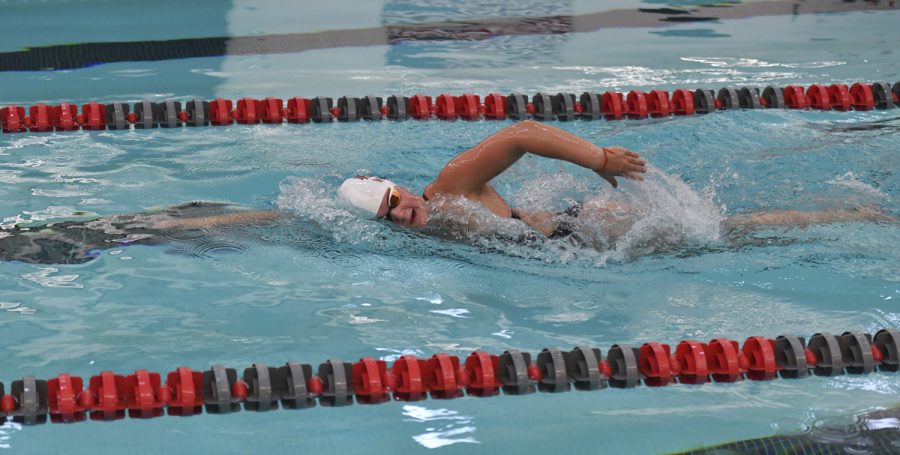 Swimmer Payton Bokowy was a member of the team that broke the 4x100m freestyle relay at the Pac-12 Championships her sophomore season.

Selflessness is something the WSU women’s swim team values and tries to instill in all swimmers.

Payton Bokowy embodies this team value perfectly, according to coaches and fellow teammates.

Bokowy, who grew up in Sandpoint, Idaho, started swim lessons when she was 3 years old. Her life-long coach Mike Brosnahan truly made her fall in love with the sport and has been a big part of her swim journey.

“I think a lot of it had to do with my coach, he was all about having fun,” Bokowy said. “Making practices and meets fun is what made me want to keep coming back through middle school and high school.”

Bokowy was only 7 years old when she participated in her first swim meet. She said she hated swimming at first, but eventually fell in love with the sport.

Bokowy started looking at colleges after a successful high school career. When she came to Pullman and toured, she found the place she wanted to continue her education and swim career.

“I felt part of a family and I connected with the team really well, having the community be a college town was special,” Bokowy said. “I decided I wanted to be a Coug and WSU was the school for me.”

During her freshman year, Bokowy battled a shoulder injury. After months of tough recovery, she was ready to go into her sophomore season.

“At the start of the sophomore year, I started to drop time constantly,” Bokowy said.

Bokowy was putting up her best times going into Pac-12 Championships. Her and three of her WSU teammates broke the record for the 4×100-freestyle relay.

“Leading up to Pac’s, I was looking at it one day and realized that it wasn’t that bad. All of our best times put together would beat the record,” Bokowy said. “I talked to my teammates and mentioned that we were close.”

Bokowy can still recall the exact moment they broke the record.

“We looked at the time and realized that we beat the record. We were shocked,” Bokowy said. “We had come together and done it. It was really cool to have this be our last race of the season.”

Not only does Bokowy have a huge impact in the pool, but her impact outside the pool is just as big.

“She’s very genuine. Even if she’s having a bad day it’s not about her, she’s extremely selfless,” WSU swim head coach Matt Leach said. “She’s someone that truly cares about her teammates and those around her.”

“If she’s cheering you on you feel motivated. Watching her work hard makes me want to be better. Watching her give her 100 percent really pushes others,” teammate Kate Laderoute said.

To Bokowy, being on the team has made her grow both as a swimmer and as a person.

“Coming here, it’s about the team,” Bokowy said. “Even if our legs hurt, we stand up and cheer for each other. It’s all about putting the team first and the team’s needs first.”

For Bokowy, being a WSU swimmer shows that if one puts in the work, one will reach their goals.

“I swim for my teammates and make them proud,” Bokowy said. “On my recruiting trip, I could see that the girls were genuine and supportive, but now being on the team, I’m a part of it and I know that I can go to anyone of them for support.”

Currently, the Pac-12 swim season is on hold due to COVID-19, but the team is still training. If the season can start up again, there is no doubt that Bokowy will continue to make an impact in and out of the water.