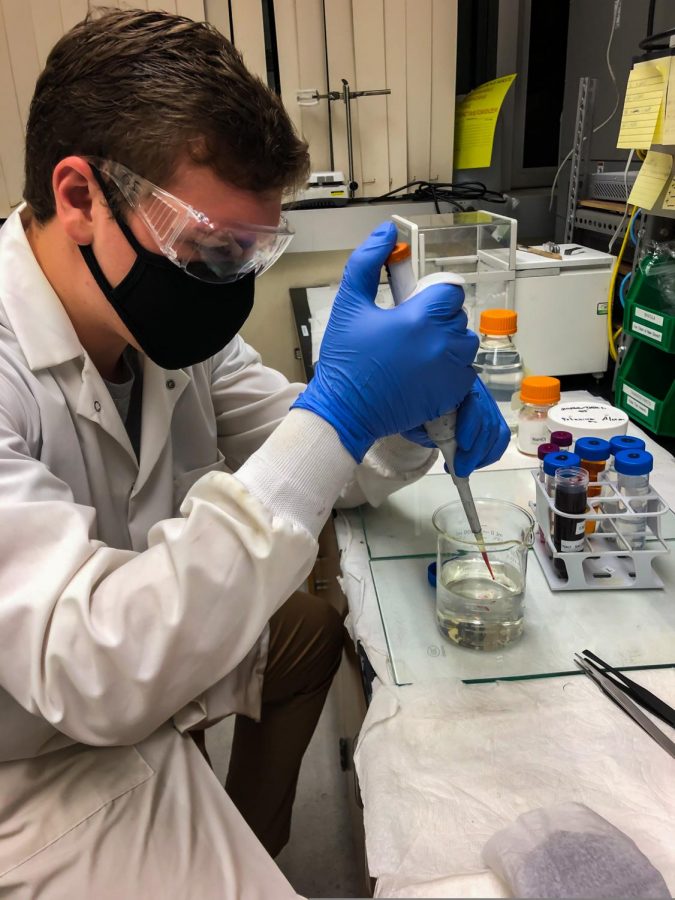 Gunnar Sly, WSU junior chemical engineering major, hopes to use a form of algae to create longer-lasting and environmentally-friendly batteries.

When Gunnar Sly was an incoming freshman three years ago, his dream came true when he was given the opportunity to do research on silicon batteries.

“I like the problem-solving aspect of engineering,” Sly said. “I didn’t think I would like it, but once I started my chemistry class, I found a union of problem solving and chemistry.”

When Sly arrived at WSU, he said he spoke with Grant Norton, dean of the WSU Honors College, and asked about being involved in research for his major. Norton introduced him to Min-Kyu Song, assistant professor at WSU’s School of Mechanical and Materials Engineering.

Song welcomed and encouraged him to pursue his passion, Sly said.

Even if campus is not entirely open, Sly has had access to labs because of his research, so he could continue working hard on what he wants, Song said.

WSU opened many doors for Sly, he said. Every year, the Honors College provides scholarships to four students to attend Southeast University in Nanjing, China. Sly was one of them.

In summer of 2019, he conducted hands-on research with other students in Southeast University, he said.

Sly chose to focus on creating a silicon battery. Lithium batteries are a good foothold for a more sustainable future, but there are 50-60 years of reliable lithium left, Sly said.

“Silica can be found all over the world, but there’s always drawbacks,” Sly said. “With silica, we found that the microstructure is not as sound as we thought. When it charges, it expands, and as the battery dies down, it contracts.”

Sly said he thought if he added pores, similar to a sponge on the battery, it may prevent the wear on the microstructure and make the battery last longer.

After a lot of research, Sly wanted to incorporate diatoms in his batteries. Diatoms are a type of algae that can be found everywhere from the Snake River to the Atlantic Ocean, he said.

Diatoms have a distinct shell surrounding it, which the researchers can use because it is made out of silica, Sly said.

“We can etch out the living organism and use the shells as feedstock for the battery,” Sly said. “I am currently growing diatoms in my lab to figure out how to exactly turn the silica from the shells into silicon.”

Sly said he has several goals for the future, including how to convert the shells from silica to silicon. He also wants to see if the different shapes, sizes and amounts of pores have an effect on battery life.