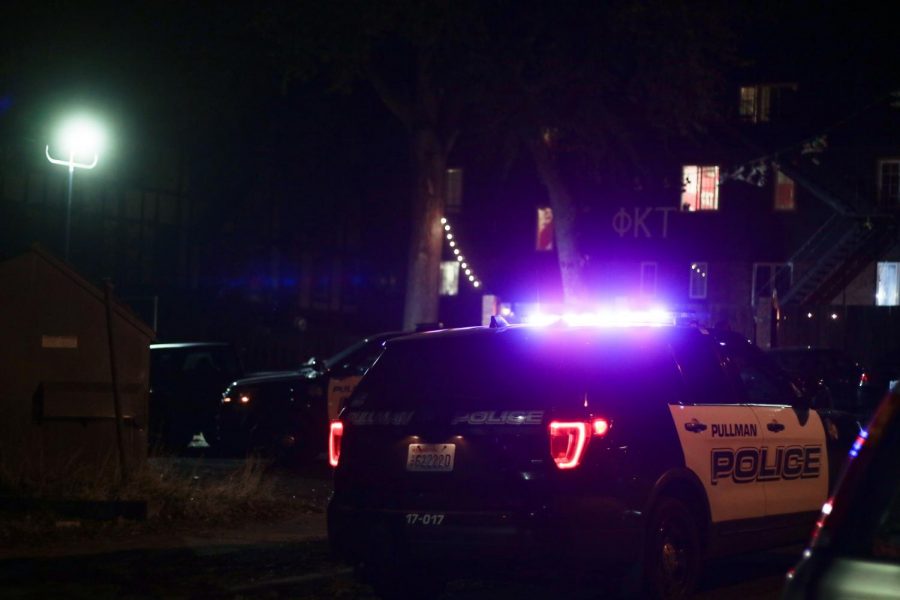 Pullman Police officers respond to an accident on Greek Row on Halloween night. The driver was under the influence.

While most of Pullman was quiet, Greek Row was filled with groups of maskless, costumed individuals and parties.

“There’s just fewer students and also there were fewer gatherings than normal just because of the pandemic restrictions,” he said.

Pullman PD’s calls between the evening of Oct. 28 and the morning of Nov. 1 increased by 31 percent compared to the same period last year, Jenkins said.

The department received 19 party calls this year, he said. The nuisance party ordinance prohibits individuals from hosting or allowing gatherings of more than 10 people on their property.

In half of those calls, officers either issued or will be issuing nuisance party infractions, Jenkins said.

As of Nov. 1, Pullman PD issued about 40 infractions, he said.

One of the calls reported a Snapchat video of more than 30 people partying, according to the police log. Officers were unable to locate the party.

On Oct. 31, seven of 44 calls were related to pandemic safety violations, according to the police log. Two of the seven calls were located at Greek Row.

Three reports involving alcohol offenses occurred, according to the police log. A minor was arrested for exhibiting intoxication, obstruction and possession.

Around 9:45 p.m. on Oct. 31, an ambulance arrived at Phi Sigma Kappa. Two paramedics were present. A male was sitting down. He looked awake but not fully responsive. Three other individuals were standing by.

Paramedics put the man on a stretcher. The ambulance left around 10:20 p.m.

There was a fire alarm at Pi Kappa Phi around 10 p.m. The Pullman Fire Department arrived a few minutes later and left around 10:30 p.m.

About an hour after that incident, there were two Pullman PD and one WSU PD vehicles at NE A Street. Officers instructed a female to do a walk-and-turn field sobriety test.

She was arrested for driving under the influence. There were no injuries, according to the police log.

Throughout the Halloween evening, groups of around five to 20 costumed individuals walked around Greek Row. Many were not social distancing, and only a few individuals wore masks.

There were many people around Adam’s Mall. Individuals were crowding The Coug, Valhalla and Coug Housing. A male in a red tracksuit failed to execute a backflip in front of Valhalla.

At the intersection of Monroe and Colorado streets, a blacklight sketch board with the words “Solve the Riddle” attracted passersby. A group of five people used the board to evangelize.

Some passersby were too intoxicated to solve the riddle. One person stayed for about half an hour and conversed with one of the evangelists, debating how the universe began.

A vehicle slowly drove by the intersection. One of the passengers opened her door, partly stuck her body out of the vehicle and screamed “I love Jesus!” Another passerby did not share that enthusiasm and mumbled, “I hate Christian propaganda because I am an atheist.”

Jenkins said it is common for WSU PD and county sheriff officers to assist Pullman PD on busy nights like Halloween.

Pullman PD officers were instructed to give warnings to groups of people who were not wearing masks and social distancing, he said.

“We were concentrating our staff’s time on parties,” Jenkins said.