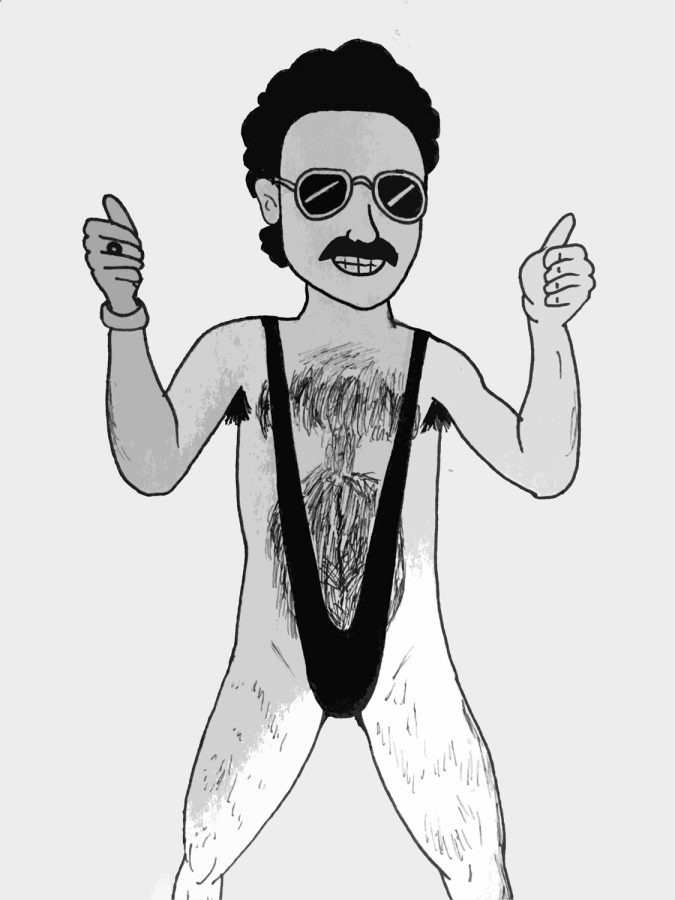 Everybody’s favorite Kazakhstani journalist has returned to the silver screen in “Borat Subsequent Moviefilm: Delivery of Prodigious Bribe to American Regime for Make Benefit Once Glorious Nation of Kazakhstan.” Not only is the title quite the mouthful, but the second installation of Borat is also about as wild of a ride as you can hope for.

We first find Borat in a gulag serving a sentence after making a fool out of Kazakhstan. He is brought to meet Premier Nazarbayev who instructs Borat to give Vice President Mike Pence a monkey as a bribe to get Kazakhstan into the United States’ inner circle.

Borat begins his second odyssey to the U.S., armed with disguises because he is now recognized across the country by fans of his first movie. The cringe-inducing encounters have been only amplified since his first time in the U.S., looking up a very explicit website while testing out a cell phone is the first indication of how this movie will go.

He quickly discovers that his daughter had stowed away and eaten the monkey that was going to be the bribe for Pence. Borat had only recently realized that he had a daughter, so he was worried that his mission was going to be a failure. Nazarbayev says Borat has to deliver some kind of bribe to Pence, or he would be executed if he returns to Kazakhstan.

He decides to give his daughter a makeover and deliver her to the vice president as a bribe. There are more hilarious encounters along the way, Borat buys a cage for his daughter, Tutar, to live in while they are on the road across America.

Borat’s actor, Sacha Baron Cohen is nothing short of a genius and his method acting redefines the term. He cannot only stay in the character of Borat, who is experiencing some form of culture shock, while also saying some very insensitive and offensive bits across the movie. Cohen’s dedication to the parts he has played has put him in danger, but he takes it head-on and can deliver some of the funniest characters in movie history.

Tutar finishes her makeover, complete with makeup, dyed hair and the intention to be delivered to Pence at the Conservative Political Action Conference. Borat puts on a very elaborate “McDonald Trump” costume and hoists Tutar over his shoulder in an attempt for Pence to see him and take his daughter as a bribe.

He is faced with jeers from the crows and is immediately escorted out by security and the Secret Service while agreeing with the “four more years” chant the crowd is repeating. Borat reaches out to Nazarbayev again to ask for further guidance, he instructs Borat to return to Kazakhstan. Tutar scrolls through a list of people close to Donald Trump, including Michael Flynn, Michael Cohen and finally, Rudy Giuliani.

Borat has an epiphany and makes a plan to deliver “Sexy Gift to Rudy Giuliani In Last-Ditch Attempt to Save Borat From Execution And Make Benefit Diminished Nation of Kazakhstan.”

It is around this time that the COVID-19 pandemic is brought into light in the film. Borat stays with a couple of men who Borat calls “America’s top scientists.” These “top scientists” claim that the virus was more dangerous than the Democratic Party, and they theorize that the Clintons created the virus.

When I watched interviews of Cohen, he said he lived with these men for five days, needing to stay in character the entire time.

Borat is a very wacky and over-the-top character, and Cohen’s ability to dive into the persona and make unique dialogue while on the fly is very impressive.

One of the more shocking moments of the movie came at a far-right rally in Olympia, Washington, where Borat dressed up as a bluegrass singer and proceeded to lead a very offensive sing-along. The song dragged people including Anthony Fauci and Barack Obama and said they should have contracted the coronavirus.

Some of the members of the crowds were carrying large guns while Cohen was making his appearance as “Country Steve.” In the movie, Borat has no problem with the crowd. In real life, Cohen had to evacuate in an ambulance after the crowd started to rush the stage.

The climax is the infamous scene with Giuliani — Tutar, who is 15 years old in the movie, has an interview with the former Trump lawyer. Giuliani makes several comments like asking for her phone number and address.

Borat Subsequent Moviefilm is an amazing satire piece with more emphasis on a plotline than the first Borat, and it still delivers with plenty of innuendoes and double entendre. Cohen has delivered a masterpiece that critiques some of America’s shortcomings and delivers plenty of laughs.

Borat should be taken lightly, there are many crude jokes at the expense of people, but Cohen has brought the humor that this time has truly needed. This movie will be talked about for years to come and should be watched by everyone who has the means.