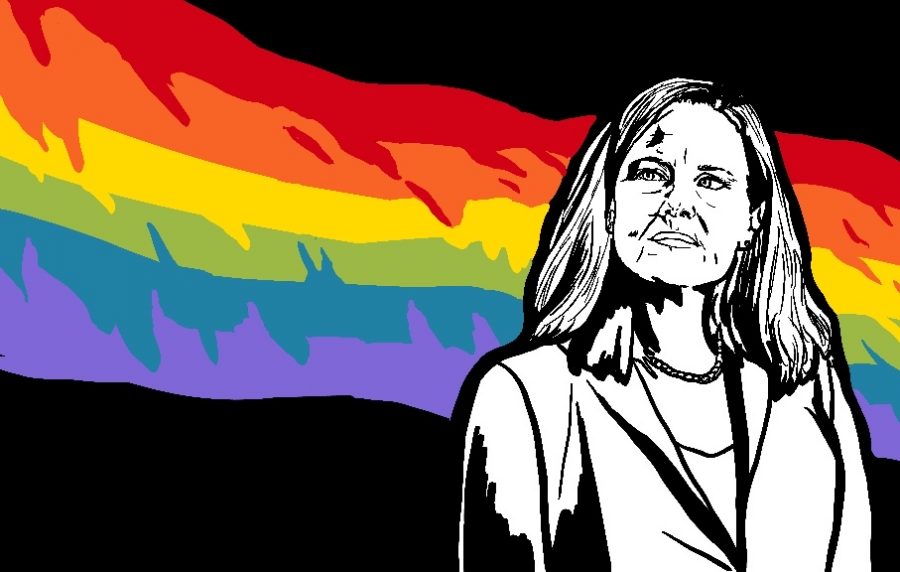 Amy Coney Barrett’s nomination to the Supreme Court signals a new wave of conservative decisions from the judicial branch. It’s conceivable that LGBTQ+ rights will be taken away because of her nomination.

Amy Coney Barret’s contentious confirmation to the Supreme Court is changing the course of politics.

Although some might view this as having more diversity in the Supreme Court, Barrett has threatened several rights, especially among women and the LGBTQ+ community. Barrett has made several comments in the past that have led many to believe that she might fight to overturn Roe v. Wade and Obergefell v. Hodges, which legalized same-sex marriage.

As a member of the LGBTQ+ community who identifies as a lesbian and a biological woman, Barrett’s nomination is a threat to my rights and others I know.

“Her conservative policies, especially regarding the LGBTQ+ community, make me worry about the basic rights for people in any sort of minority group,” Hall said. “I’m concerned about how she will affect this generation’s future. I hope to see less polarized politics in the future of this country because the divide is enormous and extraordinarily unhealthy.”

Many students agree that Barrett’s appointment could mean bad things for minorities in this country.

“I think one of the biggest things, [is] the fact that she’s a conservative and a pro-lifer, just because … there are already conservatives and those kinds of beliefs in our judicial system and it’s like, we also need support of people who are pro-choice and pro-feminist beliefs,” Kayla Dacarus, senior psychology major, said.

Dacarus said Barrett’s decisions might have more of an impact than we think.

“The ruling goes on forever, that influences other cases, so you know, if she rules against pro-choice, whatever she chooses, that goes on to other cases,” Dacarus said.

Dacarus said her generation reacts differently and more progressively to politics than her parents may have.

“I think our generation has become so progressive, in a way, it’s become very familial, because we are all starting to look out for each other, especially young people, such as the LGBTQ+ community and race,” Dacarus said. “You take these old, originalist beliefs, it feels like we are taking a step back from what we have already built.”

She said politics should become more focused on the individual, rather than larger groups.

“America is so diverse, and it’s so detrimental when you do politics with bias and politics with your own beliefs and forcing those beliefs on everyone else,” Dacarus said. “I hope in the future that politics can actually become non-partisan.”

Members from my generation and myself are concerned about the future of politics. I hope that my rights are not taken away, and I hope I can exercise my freedoms, such as same-sex marriage, in the future.