Icy hills, snowy walks to campus are all parts of the Pullman winter experience 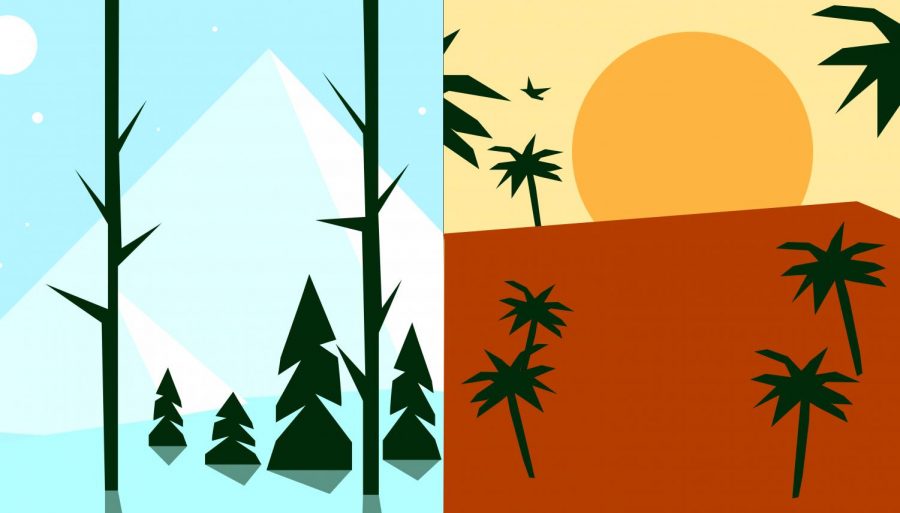 The different climates students come from may not prepare them for Pullman's unique winters.

Coming from central New York, I had no expectations about Pullman’s winter. Even though it snowed earlier this year than I am used to in New York, I find the winters to be fairly kind most of the time.

There have been a few embarrassing incidents, but overall, the amount of snow cannot compete with what I grew up with. There were only two major aspects of winter in Pullman that I struggled with — ice and hills.

I cannot remember having a winter without a decent amount of snow or horrid windchill, although I will not claim winter in central New York is harsh.

Naomi Kim, senior business management major from Hawaii, said she was expecting winters at WSU to be pretty harsh when she first arrived.

“Going into the Alive Orientations, the returning students were emphasizing a lot that Pullman winters were kind of tough,” Kim said.

Kim said the reality of Pullman winter was still worse than what she was expecting partly due to doubting it was as bad as she was told it would be.

“I remember thinking like, ‘I’ve been in snow before, it’s really not all that bad. I should be fine,’” Kim said.

The winter in Pullman did get her more in the holiday spirit, Kim said. In Hawaii, she said she would hear songs about white Christmas or chestnuts roasting on a fire.

“There was still holiday cheer but the outside didn’t match what the advertisements said,” Kim said.

She said she enjoyed being able to look outside and see snow or having to use a heater. She also said she enjoyed the sense of community winter brought, like when people she didn’t know would talk to her about how hard it was getting to class that day.

Like many people, Kim said the snow is fun for the first few days but after having to trek to and from class or worrying about the ice on the hills, it could be a challenge.

“I definitely expected a lot of snow and I think I expected for it to get colder than it does,” said Amanda Bertoch, junior theoretical mathematics major from Southern California.

Bertoch said her sister lived in Idaho for a while, so she expected Pullman winter to be worse, but it wasn’t quite as bad as where her sister lives. She said she wasn’t prepared at first, as winter, where she lived, was about 50 degrees and sunny.

“I didn’t get anything that I needed until after winter break, so it was like January when I was finally more prepared, but even then I didn’t know how to handle snow very well,” Bertoch said.

Winter was, however, better than what she was expecting.

She said she had been expecting to fall and break her neck or something similar but has only fallen once in her three years at Pullman. Learning how to walk on the ice and avoid falling down was the hardest thing to adjust to, Bertoch said.

Bertoch, and likely most students, said she has seen people fall and slide down the hills on campus. The stairs down toward the dining hall by Olympia Hall and McEachern Hall were a spot Bertoch said she avoided.

I can’t disagree with comments about snow getting old or ice being stressful — I love snow the most when I don’t have to go out and do anything, and the ice gave me a hard time now and then. In central New York, we salt the roads aggressively, and most of the area was flat. I remember falling near Southside Cafe and sliding the last foot or so down the hill.

It was hilarious to me but also humiliating. To this day, I hope no one saw me.