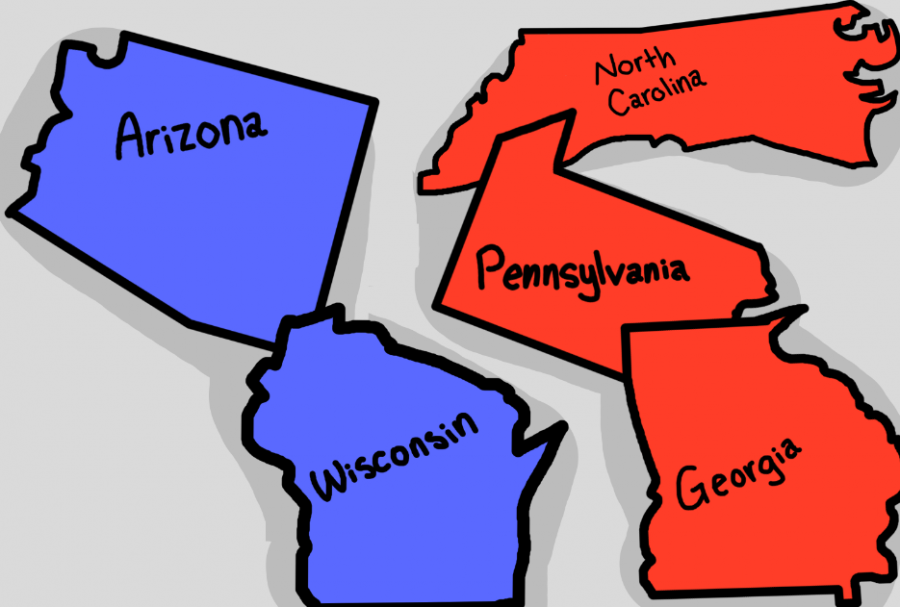 There are essentially five states that will decide this race — and two of them are hotly contested.

I chose to watch the Fox News coverage, mostly because there seems to be a real demented, twisted vivacity behind those newsmen. Perhaps Roger Ailes’s spirit crawls its way out of hell every so often to put a fire behind the Fox team, and tonight was just such a night. Karl Rove, who looks like a voodoo doll of Dick Cheney, and Tucker Carlson, looking perpetually pissed at the world, provided color commentary.

And then things began to go pear-shaped. At about 6 p.m. PST, Louisiana and Kansas had gone to Trump — little surprise there. Georgia, Texas and North Carolina, all crucial states for a win, were too early to call, so Fox tiptoed around speculation.

“We know a little bit about a lot of states, but we would like to know a lot about a few states,” was a popular refrain. I heard it from Nate Silver, the head of FiveThirtyEight, and again from a Federalist correspondent whose name I didn’t catch that went on Fox at 6:20 p.m. or so. It’s a testament to the polling industry that they remained hopeful by this point in the night (about 6:30 p.m. Pacific, 9:30 p.m. Eastern).

At 6:45 p.m., Florida was still too close to call — another crucial swing state for either party. Fox was officially calling Biden’s 129 electoral votes to Trump’s 109 electoral votes, which wasn’t necessarily a surprise, considering a large number of Biden states were on the East Coast, whose polls closed first.

South Carolina officially went to Trump by 7:32 p.m., and North Carolina was too close to call. Utah went to Trump by 7:38 p.m., followed by a long stretch of nothing much happening, during which the Fox anchors stalled for time. This was something they’d get worse and worse at throughout the night, in a direct relationship to the number of states reporting. I think that’s how direct relationships work — I got a D in calculus, so I’m throwing darts here.

At 8:04 p.m., the first big news of the night came in. Trump won Florida, by a fairly significant margin — around 3.4 percent. There was a tacit agreement that this was a necessary state if either candidate wanted to stay in the game, especially considering its importance in 2016’s election.

This was tempered by Biden’s Arizona win at 8:36 p.m. I had predicted a Trump win in Arizona in my predictions column, so I took about five minutes to stare at the wall and punch myself in the face, Tyler Durden-style, for being wrong. In all fairness, the Trump campaign contested it almost immediately, claiming there were still almost a million votes left to count. Fox brought on a prediction specialist, who argued that there were only a few hundred thousand to tabulate, so the probability of Trump winning was low. With that said, I think there might be some grounds for the Trump camp to litigate, and even if there aren’t necessarily grounds, some will be found.

In fact, on multiple highly regarded electoral maps (270ToWin and CNN) Arizona is still grayed out, indicating that news organizations aren’t unilaterally confident in a Biden win — so I’m not technically counting this as a reversal of my prediction. Yet. More info has to come in.

At 8:45 p.m., Trump took Ohio, which is worth mentioning because if Trump loses the election, he’ll be the first nominee to win Ohio but lose nationally since 1964. Many are saying this!

At 8:54 p.m., Trump took Texas. Texas had been the subject of some debate nationally because the polling was incredibly tight between the two candidates. The most recent numbers, however, have Trump up 6 points, placing him firmly in the win category for the Lone Star State.

And then — out of nowhere, it all stopped. Biden took Washington, Oregon and California, while Trump snagged Idaho and most of the Midwest, including Iowa. Nebraska’s second district went blue, which I hadn’t predicted, while Maine’s second district went red, which I also hadn’t accounted for. For about three hours, the anchors stalled, while results were allegedly tallied.

Both candidates came out and gave brief speeches at around 11 p.m. Biden told his supporters in Delaware to “keep the faith,” while Trump claimed the campaign was being “robbed.” Sound and fury, et cetera, et cetera.

By about midnight, it was becoming increasingly obvious no more major states would be reporting, due to mail-in ballots and sheer volume, so I turned off the live stream and wistfully hearkened back to 2016.

Wednesday gave Biden Wisconsin, who the AP called for Biden at 11:19 a.m. Wisconsin is interesting and probably prime material for litigation because the percentage is razor-thin. Biden leads by around 0.6 points, which is technically within the bounds to ask for a recount, which Trump assured his supporters he would do.

Michigan also fell into Biden’s camp at 1:45 p.m. Wednesday, with Biden maintaining a 1.3 percent lead, according to Fox.

There’s legal precedent, from 2016, for Trump to call for a recount in Wisconsin. Jill Stein’s recount effort in Michigan and Pennsylvania established legal grounds. Like Arizona, Wisconsin is in sort of a gray area at the moment.

And that’s true for the rest of Americans as well. The last time an election had the potential to drag on this long was in 2000 when “hanging chads” became the talk of the nation. Pennsylvania’s absentee ballots will likely take the rest of the week to tally, while Alaska isn’t even reporting a win yet. (It’ll probably go to Trump.)

There are essentially five major states left to win or lose: North Carolina, Georgia, Pennsylvania, and depending on a recount effort, Wisconsin and Arizona. Perhaps Trump will litigate Michigan, but I tend to doubt it.

It’s really too early to say anything definitively, but I’m confident in saying this — the longer this amorphous purgatory continues, without a clearly defined president, the worse our situation will become. Civil unrest is boiling beneath the surface, and in the powder keg of 2020, it won’t take much to set it off.