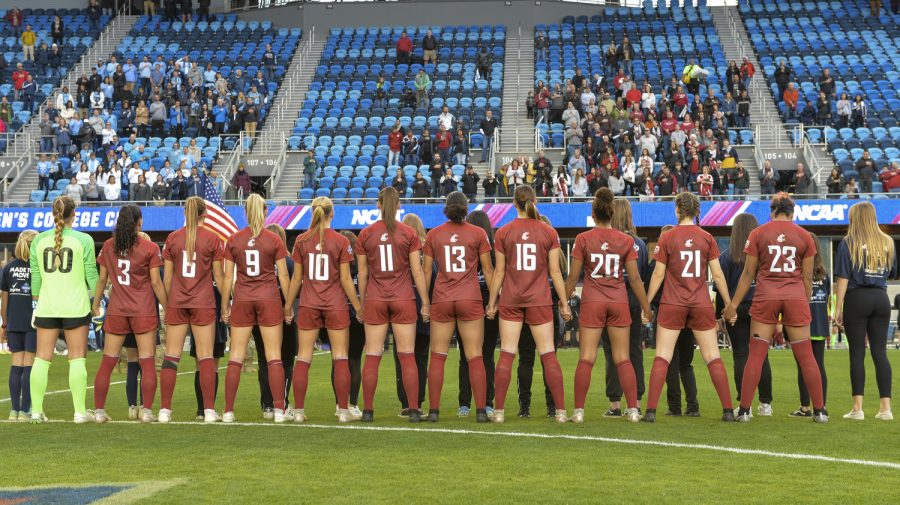 WSU soccer team holds hands before their matchup against the UNC Tarheels.

The 2019-20 season was a historic one for the Washington State Women’s soccer team. The Cougars posted a record of 16-7-1, en route to the first NCAA Final Four appearance in program history.

While the entire season was indeed a rollercoaster, the most notable match occurred in Eugene E. Stone III Stadium, in Columbia, South Carolina.

However, the road to get to the Elite Eight game by winning against the number two ranked team in the nation is just as important as the match that ultimately made school history.

“We’ve always been the underdog, so believing in what we can do, and showing the world what we can do helped us out a lot,” former sophomore defender Mykiaa Minniss said.

WSU entered the 2019 postseason tournament with a chip on its shoulder, unranked in the NCAA top-25.

In the first round of the tournament, the Cougs were matched up against No. 14 Memphis.

“There was just something in the air that night that set the tone for the game,” head coach Todd Shulenberger said.

The Cougars defeated Memphis 1-0, with the only goal of the game coming from the former junior forward Makamae Gomera-Stevens in the 61st minute.

“Now we wanted respect,” Shulenberger said, “and I don’t think we got it until we went deeper into the tournament.”

The next match was in Charlottesville when the Cougs paid a visit to No. 3 Virginia. It was only the third meeting between the two schools, and WSU was once again a heavy underdog.

Virginia was ranked first in the nation for the majority of the season, but nobody in the WSU program batted an eye at the stats.

In a game that has been called “The Upset for the Ages,” Washington State hung on to pull off an unbelievable 3-2 upset victory over the Cavaliers.

“That was just a taste of what we could accomplish,” Minniss said.

The team was right back in the same stadium two days later to play against the University of West Virginia.

The Cougs breezed by the unranked Mountaineers 3-0 and were on their way to the quarterfinals for the first time in Washington State history.

Minniss said that a lot of WSU’s success to that point can be credited to the team culture.

“[Coach] Todd has his superstitions; he always wears the same hat and outfit,” Minniss said. “As a team, we’re pretty goofy, but when that whistle blows, we all put our heads down and go.”

The tournament thus far had merely been a warmup for the Cougs, who on Nov. 29 found themselves in their toughest match yet.

The Washington State Cougars were set to take on No. 2 South Carolina Gamecocks. This was the Elite Eight; the winner of this match would advance to the Final Four.

Unlike the Cougs, the Gamecocks were on track to make their second all-time appearance in the College Cup, while WSU was in the hunt for their first-ever appearance.

South Carolina came into the matchup not allowing a goal in seven straight matches, and former WSU goalkeeper Ella Dederick knew that it could come down to the keepers.

Dederick had two crucial saves, while the Gamecocks goalkeeper kept pace with three of her own. It was a physical, back-and-forth game, both teams would bend, but neither side would break.

The match went into overtime with no score and an undetermined winner after 90 minutes.

In the 94th minute of the game, WSU got the break they so desperately needed and found themselves in a prime position to punch their ticket to the Final Four: a corner kick.

As the teams were lining up for the corner kick, Minniss told Shulenberger to let her up into the pile near the goal.

“She asked for it, so I said go for it,” Shulenberger said. “I took a little risk and put both center-backs up by the goal.”

Hanna Goff was the player tasked with serving the ball from the far-right corner of the field into the skirmish by the goal.

“I looked at the team and my assistant coaches, and I said ‘Guys, get ready because this is it right here,’” Shulenberger said.

As Goff lofted the ball in bounds, a South Carolina defender, headed the ball up in the air.

The ball fell right in front of Minniss, who knocked it into the back of the net.

“Honestly, anybody on my team in that situation could have buried the goal the same way I did,” Minniss said.

That goal was the dagger, a walk-off to win the game, and it sent the Cougars to the College Cup Quarterfinals.

Although WSU fell short of a championship title, the match against South Carolina and the 2019-20 season as a whole will be remembered in Pullman forever.

Coach Shulenberger said the goal for this team moving forward into the 2020 season is to maintain a winning culture and attitude.

“The underdog role has always been here. It’s been a part of this team, this school and every university program,” Shulenberger said. “I think with our team, that role is about to change.”