Student leaders do not want higher student fees during pandemic 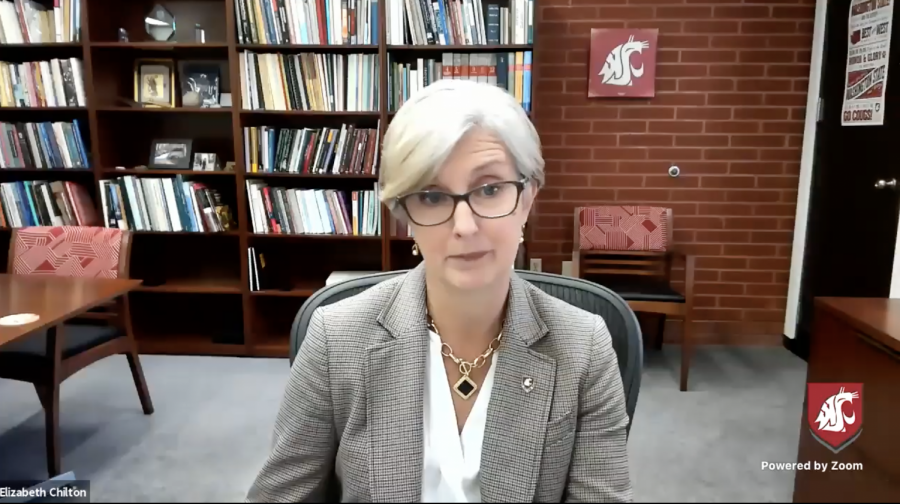 About 65 classes were approved for in-person instruction in the spring. That is twice the number of classes that were approved this fall, WSU Provost Elizabeth Chilton said.

Students may pay about $50 less in student fees for summer 2020 and academic year 2020-21, according to WSU officials during their Board of Regents virtual presentation on Thursday.

The university worked with student organizations to determine which fees would be reduced, said Mary Jo Gonzales, WSU vice president of student affairs.

Because of the challenging financial situation, student leaders expressed they did not want to increase fee burdens on students during this time, Gonzales said.

WSU Pullman and Tri-Cities officials propose the university allocate $8.9 million for S&A fees instead of the $9.4 million approved in June, according to the Board of Regents agenda.

Every department, including student media and WSU Athletics, took thousands in cuts, except for the Women*s Center, WSU Children’s Center, Access Center, Cougar Health Services and the Cougar Marching Band.

WSU Athletics proposed a revised budget plan to the board, which includes a yearly $2-3 million commitment to the program “to provide institutional support of intercollegiate athletics,” according to the proposal.

Stacy Pearson, WSU vice president for finance and administration, said many universities also commit money to athletic programs, and WSU Athletics has been reducing its deficit.

Pearson said she knows faculty have been vocal about not wanting university funds to support WSU Athletics, but staying in the PAC-12 has an overall financial benefit.

Faculty Senate Chair Greg Crouch said there is little evidence to support the financial benefits of staying in the PAC-12 for WSU.

“One thing is, we lack data,” he said. “We make this assumption that we have to stay in the PAC-12 … but we don’t have the data to support that.”

Board member Ron Sims said he firmly believes in staying in the PAC-12 and that doing so would uphold WSU’s national reputation.

“Having a team in a major conference actually has a wider spillover effect,” Sims said.

“As we get stability, part of this plan has to be to work to repay that accumulated deficit over time,” she said.

WSU generated about $11.2 million in cash revenue by selling bonds, which were in “strong demand,” Pearson said. The school is looking into grow its reserves, she said.

“Given the COVID situation, what we probably want to do is just set this cash aside as we navigate our year and see what happens,” Pearson said.

For the spring semester, WSU approved about 65 classes for in-person instruction, which is twice the number approved this fall, said Elizabeth Chilton, WSU provost and executive vice president.

“In the cases where we’ve approved, [the class] is just something that we cannot carry out with high quality in a remote fashion,” Chilton said.

The board also discussed the College of Agricultural, Human, and Natural Resource Sciences’ proposal to create a viticulture and enology department. There is currently a program but no department, she said.

Chilton said she is surprised the university does not have a department, considering WSU’s long history in the area.

“This would help put WSU on the national map among our peers and allow us to have the leadership necessary to move the program forward,” she said.

According to the meeting agenda, the proposed annual budget for the new department is $5,359,922.

Additionally, the university is discontinuing its masters in public affairs program because of decreasing enrollment over the years. Students wanting to pursue this career should look toward other Washington state universities that offer the program, Chilton said.

“Universities are notorious for adding, and we don’t subtract as much as we should,” WSU President Kirk Schulz said. “If something’s not working, we have to be willing to pull it off the table and redirect resources elsewhere.”

The MPA program faculty stopped taking new admissions for the program in fall 2018, Chilton said. The four students currently enrolled in the program will still graduate from it.

As a research institution, WSU spent about $369 million in fiscal year 2019. Although research expenditures have increased over the years, spending has decreased this year due to COVID-19, said Craig Parks, WSU vice provost for system innovation and policy.

The board will vote on establishing a department of community and behavioral health during its meeting on Friday.