With WSU projected to finish 11th place in the pre-season Pac-12 media poll, the Cougars continue to prep for the season with a chip on their shoulder 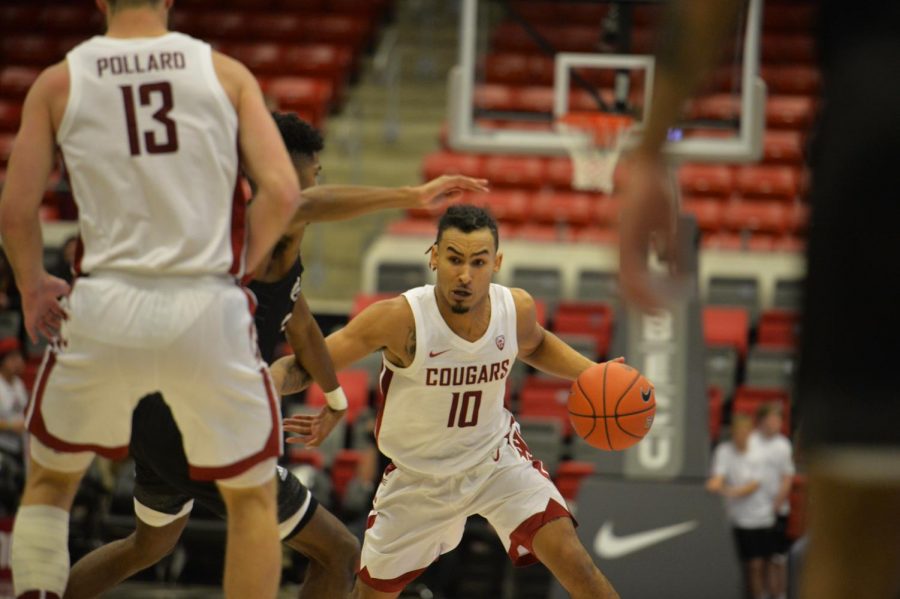 Senior guard Isaac Bonton was selected to the preseason All-Pac-12 second team Thursday morning. He is the only Coug to be recognized on either first or second team.

The Pac-12 released the 2020-21 media poll and the preseason all-conference selections Thursday morning.

In the Pac-12 media poll, The Cougars ranked 11th, just one spot away from the dead last Oregon State Beavers. This is the second straight season where the Cougars rank 11th.

WSU’s 30-minute time frame at the webinar started with a 15-minute segment with Bonton, followed by a 15-minute interview with head coach Kyle Smith.

During his time slot, Bonton said this ranking for WSU does not affect the team’s mindset after having a 16-win season last year.

“It’s a new year for everybody. Nobody has played through a pandemic before, so it’s going to be interesting.” Bonton said. “We’re ready to open eyes just like we did last year.”

Bonton said he appreciated the acknowledgment from the Pac-12 as one of the conference’s most talented guards. However, he’s not settling to be one of the best guards in the conference, he wants to keep proving people wrong this season.

“I know definitely by the end of the year, I’m going to change some opinions,” Bonton said. “Definitely not satisfied, definitely ready to work all year.”

Smith then hopped onto the webinar and commented on how the Pullman community compares to a “bubble” type environment, much like what the NBA put on in the middle of the summer.

Smith said the community has been like a bubble in itself, and the team has handled itself well in the isolated atmosphere.

“We’re kind year-round in a bubble, and that sounds funny, but we are a bit isolated here,” Smith said. “That’s what makes it unique but also makes it a college town.”

Smith discussed the team’s progression toward putting together a starting lineup before the season. In a previous press conference, Smith said there was a handful of promising freshmen that could crack the starting lineup this season alongside some WSU veterans.

However, Smith said he believes the team is leaning more toward having a veteran presence on the starting lineup. Freshman guard Jefferson Koulibaly is likely out for the season with an apparent arm injury.

Both Bonton and Smith praised the 2020-21 class’ length and said it improves the team’s athleticism as a whole. Despite the departure of CJ Elleby this offseason, Smith said he believes the team is in the right place to succeed.

“I always say, ‘If you don’t feel good about your team this time of the year, you need to quit,’” Smith said. “I like our guys. We’re doing well. It’s just inexperience.”