Sophomore Alexcis Lusby is known by her teammates as someone who is constantly putting in work, will not settle 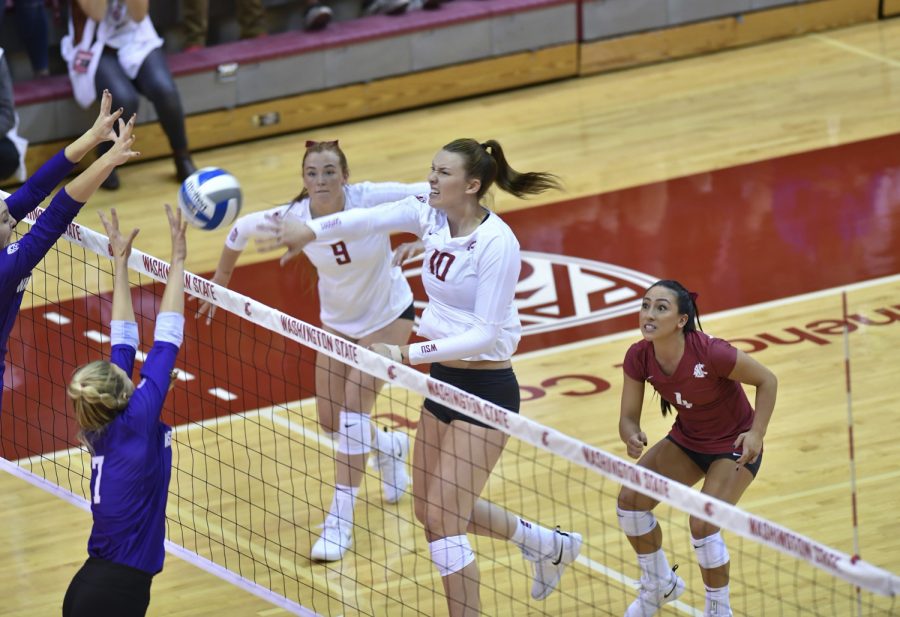 Passion, unity, servanthood, humility and thankfulness. These are the five pillars of the WSU women’s volleyball program, and Alexcis Lusby embodies them all.

The 6-foot-5-inch sophomore opposite started volleyball in the eighth grade because she was tall and was not interested in basketball. Throughout her volleyball journey, she has had several great coaches, including her club coach who has had a major impact on her development as a player.

“He pushed me beyond anything I was capable of,” Lusby said. “He was really hard on me, which prepared me to come here.”

When the time came to go through the recruitment process, Lusby came to Pullman and fell in love with the campus and coaches.

Head coach Jen Greeny recalls watching Lusby in practice and thinking how big of a potential impact she could have. Greeny was correct, as Lusby would have a tremendous impact on the court.

“She is pretty intimidating to the other side, and she is a player that can change the momentum of a game with a big block or with a forceable hit,” Greeny said. “For her teammates, she can get them fired up with a big point or something else like that.”

Last season, the Cougs traveled to Los Angeles to play USC. The Cougs were expected to lose but instead pulled off an upset against the Trojans. Lusby was a major factor in the big win.

“I remember our USC match down in LA,” Greeny said. “It was a big upset and she had either a kill or a block and did a huge fist bump.”

Coach Greeny said Lusby is always trying to improve herself and focuses on the little things to get better.

Teammate Penny Tusa describes Lusby as someone that is a hard worker. Lusby is known to be the player that stays after practice or goes early to work on her skills.

“She wants to get technical with her mechanics, and she’s trying to get better every single day,” Tusa said. “She’s staying after practice and working every day and if she doesn’t feel like she’s doing well, she stays after.”

As a freshman, Lusby was invited to try out for the USA Women’s Collegiate Team.

“It’s exciting to go and try out for the USA Collegiate National Team,” Greeny said. “I think that’s a testament to her skill on the court and her dedication to the game.”

Going into the tryout, Lusby was extremely nervous and recalls seeing all the top players in the nation.

“These are girls that you see highlights of and had worked super hard to be there,” Lusby said.

The Cougs are hungry to win and want a championship whenever they are allowed to play next.

“Our team has been syncing together more and more each day,” Lusby said. “That shows our drive for a championship more and more.”

Off the court, Lusby is seen as someone that is invested in the lives of her fellow teammates.

“No matter what she’s going through, she’s always going to do her best and support her teammates and support the WSU volleyball program,” Tusa said.

Lusby has not only proved herself as a key player in the WSU women’s volleyball program, but she has also proven herself in the Pac-12 as a serious competitor. As a freshman last year, she was fourth on the team in kills and third in blocks.

The volleyball team has not been able to play because of COVID-19, but when they do, it will be an exciting season to watch.