Here are five takeaways from the 43-29 defeat 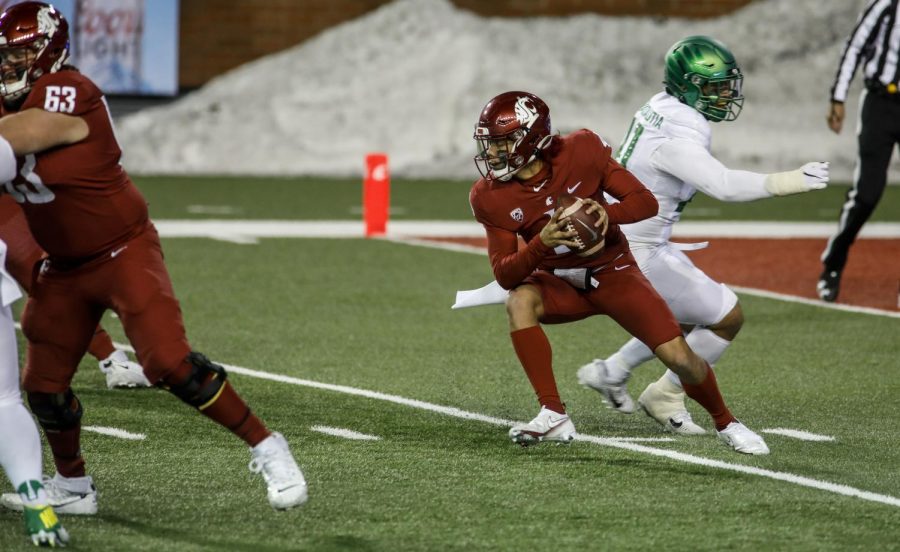 Freshman quarterback Jayden de Laura evades a potential sack during the game against Oregon on Nov. 14 at Martin Stadium.

For 30 minutes of game time on Saturday, it looked like WSU was going to upset the No. 11 Oregon Ducks. Unfortunately, there are two halves to a football game, and the Ducks handily won the second one.

Despite the loss, this game proved a lot about this Cougar team. They were able to hang with a team that is probably the best in the conference. Quarterback Jayden de Laura also showed that his performance against Oregon State was not just a product of bad defense.

There is no such thing as a good loss, but the reaction from Cougar fans should not be one of disappointment and despair. It should be a reaction of hope, as this team has laid a foundation that will benefit the future of this program.

Takeaway #1: Ayden Hector is the best walk-on in the country

The freshman defensive back has not even been with the team for a month yet, but he has already established himself as a player to watch on the defense.

After filling in for safety Tyrese Ross last week against Oregon State, Hector made even more plays this week despite not being the starter. He recorded three turnovers against the Ducks with one interception and two fumble recoveries, including one that he forced himself.

His turnovers came on three consecutive drives starting at the end of the first quarter. He was a big reason why the Cougars were able to take a 19-14 lead into halftime.

Hector also racked up four tackles in the game, an ample follow-up to his seven last week, which is tied for the team lead.

The most impressive part of all of this is that Hector is a walk-on. The former four-star recruit and the best rated high school player on the WSU roster had his scholarship rescinded by Stanford as a result of a controversy he was involved in while in high school.

WSU swooped in and picked up the stud defender in what proved to be one of the smartest moves this program could make. They made sure that Hector’s past issues checked out, he was never charged and was only involved as a witness before they brought him onto the team.

All Hector has done since he joined the team in late October is proving himself to be one of the best playmakers on the defense. He is quickly becoming one of the best walk-ons in the conference and is going to make Stanford regret their decision when he gets to face them on Saturday.

Takeaway #2: The offensive line was up to the task

A lot of eyes were on the trenches in this game, specifically when the Cougars had the ball. After the line was the most impressive aspect of the team against the Beavers, there was a lot of pressure on them to repeat that performance.

The five guys up front did not have the same performance as last week, but they were equally impressive going against a much more formidable opponent.

The Cougar offensive line only gave up one sack and four quarterback hits to a very talented Oregon defensive line. That group includes Kayvon Thibodeaux, reigning Pac-12 Freshman Defensive Player of the Year, who recorded two of those quarterback hits.

The WSU line also had another good showing in the ground game, consistently providing redshirt senior running back Deon McIntosh with advantageous rushing lanes. McIntosh had 92 yards on 16 carries for an average of 5.8 yards per carry.

A lot of aspects of this team looked shaky on Saturday, but the offensive line once again proved to be the steadying force for the Cougars. They lived up to the moment and did everything they could to help try and pull off the upset.

The Cougar defense still has a long way to go before they are the strength of this team. They looked promising against the run, bottling up some of the runs right up the middle, but were still susceptible to the big plays that were frequent last year.

They allowed eight plays of more than 20 yards against the Ducks. Only one of those plays came in the first half, further proving the defense’s tendency to break down in the second half. Three of those were runs on the final drive of the game when the defense needed a stop the most.

The unit did show improvement. Oregon running back CJ Verdell ran for 257 yards against this team in 2019; WSU was able to hold him to “just” 118 yards this year.

The size up front has helped to clog up the inside running lanes, but this team can simply be beat in other areas.

A handful of broken coverages led to big plays, like the 57-yard bomb right before halftime, and the 71-yard touchdown pass to running back Travis Dye.

This unit has shown improvement this year, it is definitely not the same unit that was consistently lit up last year, but the development on that side of the ball is far from finished.

This defense can stuff runs up the middle all it wants, but if they still allow teams to get big chunks of yardage at will, they will not stop a lot of teams.

Takeaway #4: Jahad Woods is back

He was not injured or in trouble or anything, but something made Woods record just five tackles last week against Oregon State.

Whether it was rust or some other factor, he has officially moved past it and has reminded Pac-12 fans why he is the conference’s leading returning tackler.

After some inefficiency and even some time on the sideline, the reason was never clarified, Woods played exceptionally well against the Ducks. He had 11 tackles, eight of which were solo, to go along with the three tackles for loss, one pass breakup and the team’s only sack.

Woods looked like the player that racked up 141 tackles last year, making plays all over the field. He did everything from stuffing runs up the middle to chasing down Verdell on the perimeter.

Any worries that Cougar fans had about Woods from looking at last week’s box score have now been put to rest. Fans can be reassured, knowing that Woods will be playing well in the middle of the defense for the foreseeable future.

Takeaway #5: Someone needs to step up on the outside

Wide receivers Travell Harris and Renard Bell have been playing great out of the slot, but the same cannot be said for the other two receiver positions.

The two outside spots have combined for just 10 receptions for 100 yards and one touchdown. They have accounted for just over 18 percent of de Laura’s yards, which is not good for 50 percent of the starting receivers.

Jamire Calvin, Calvin Jackson Jr. and Lucas Bacon have been the only three players to catch a pass on the outside. One of them is going to have to step up and provide the freshman signal-caller with a third weapon through the air.

Calvin has been the best of the bunch so far. He has caught six catches but has averaged just 10.3 yards per catch, more than two yards less than both of the slot receivers.

De Laura has looked very promising so far, but there is only so much the inexperienced quarterback can do with just two reliable targets.

Whether Calvin shows what made him one of the best WSU recruits of the last decade, Jackson returns fully healthy from injury or Bacon continues to impress as a walk-on, somebody has to emerge sooner rather than later.

Bacon looks to be trending in the right direction. He turned his first career catch into an 18-yard touchdown on Saturday. Regardless of who it is, de Laura will be very glad to have another receiver he can trust to make plays for him.