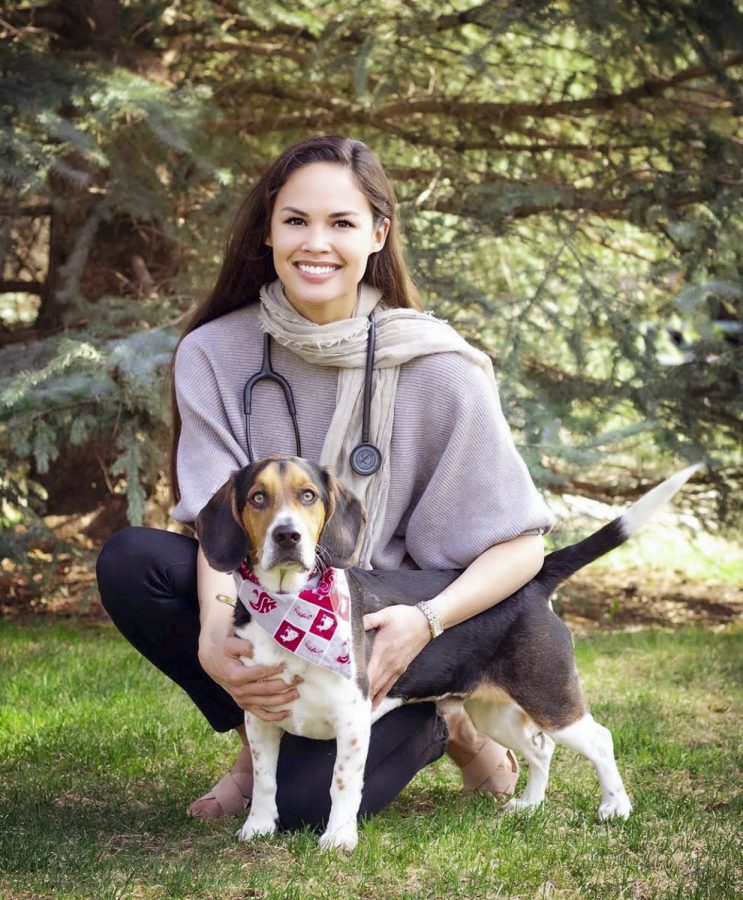 Kim Layne has used her Miss Idaho USA title to work with causes she is passionate about, such as her involvement in giving veterinary treatment to homeless individuals’ pets.

This article has been updated to reflect that Kim Layne is the first delegate from Pageants Northwest to place runner-up and that there are many unknowns surrounding her father’s health.

Layne is the first delegate in the miss division from Pageants Northwest to place runner-up at Miss USA, said Maureen Francisco, executive producer of NW Productions and one of Layne’s managers.

For about 10 years, Layne lived in the military town of Mountain Home, Idaho, before her family moved to Nampa, Idaho. She said she grew up as a minority in the area.

“When I was a kid, I was one of a few brown kids, so to say, and one of very, very few Asian American kids,” she said. “I didn’t realize what that really entailed when I was a little girl. I just knew that I was a little bit different.”

Layne’s dad is Irish-American and her mom is Filipina. She said her Filipina identity had a big influence on her upbringing.

“My mom brought a lot of her culture over with her,” Layne said.

Growing up, Layne traveled with her parents to different research institutions. She spent many years listening to doctors discuss her dad’s undiagnosed neurological condition. Layne said she thought her dad was going to die before she turned 18.

“No one should have to see their parent, for years, struggling in hospitals,” she said.

Many unknowns surrounded her father’s health, Layne said, and she had to grow up quickly. She became independent, focused on her education and did everything she could to support herself and her family.

“It was part of this fire I had under my butt to work really hard in high school because I didn’t have the security of knowing that my dad was going to be there,” she said.

Wanting to attend college debt-free, Layne studied hard in high school and participated in activities that could increase her chance of receiving a full-ride scholarship. She said her family did not have the resources to support her financially at the time.

In high school, Layne was involved with different science clubs and the National Honors Society. She played volleyball and soccer, and ran track. Layne said she took almost all AP and college-level courses from her sophomore to senior years in high school.

Layne said she attended Cornell University with a full-ride scholarship. She graduated in 2016 with honors, majoring in animal sciences with a minor in biomedical sciences.

Since 2017, Layne has been pursuing a master’s in public health through the University of Minnesota. She is also working on her Doctor of Veterinary Medicine degree through WSU. She will be graduating in May 2022.

She said she would like to use her degrees to serve as a public health correspondent or work for international groups like the OIE – World Organisation for Animal Health and the World Health Organization.

Witnessing her parents put others before themselves encouraged her to use her skills and education to improve the lives of others, Layne said.

“If you stripped away my desire to make an impact with my career and hobbies, I’m not really sure who I would be,” she said. “This altruistic center is probably the most defining part of my character.”

Prioritizing her education, Layne said she was initially not interested in pageants. But she ended up competing for Miss Idaho Teen USA in 2012 when her friends encouraged her to try it.

At the time, Layne did not realize what she was getting herself into. Layne competed on a whim with several of her friends. She then competed for Miss Teen USA, which she did not win.

After years of not competing, Layne said she decided to try out for Miss Idaho USA in 2019 because she believed she had a lot more to offer.

“She was looking for the title of Miss Idaho USA,” Francisco said. “I could see that hunger and that spark inside her.”

As the titleholder, Layne worked on different projects for causes she is passionate about. Before COVID-19, Layne worked with the nonprofit Nomadic Critters in Boise, Idaho, where she gave veterinary care to pets of homeless individuals, she said.

Layne also worked with Rural Area Veterinary Services. She traveled to the San Carlos Apache Indian Reservation in Arizona to help with flea and tick prevention.

Because she had only participated in a few pageants, Layne said she had to learn many things to prepare herself for Miss USA.

“Every single moment was a learning opportunity,” she said.

Acing the interview portion of the pageant was the main focus of Layne’s preparatory training for Miss USA. Francisco said she watched Layne during the interview segment of Miss Idaho USA and knew Layne needed to work on being clear, concise and conversational in her answers.

“I watched her go from that moment to answering the top five questions at Miss USA,” Francisco said. “Like, wow. Talk about how she just did a 180.”

Jimmy Langhoff, owner of the coaching business A Queen’s Conversation and Layne’s interview coach, worked with Layne at least once a week for 11 months. All interview training was conducted over video calls because Langhoff lives in Wisconsin.

Layne had to learn how to balance her analytical and scientific mind with her personality, Langhoff said.

“She’s a scientist. She’s a brainiac,” he said. “What happens is that in interviews, it’s hard for a judge to connect and identify and relate to someone who’s very analytical and scientific.”

Despite this challenge, Layne was humble and wanted to learn. Langhoff said Layne listened to different coaches’ feedback.

“Kim knows who she is from the inside out,” Langhoff said. “She doesn’t take herself too seriously. She’s very lighthearted.”

“You just learn to roll with the punches as things change,” she said. “You learn to be flexible, adaptable. You also learn to represent yourself.”