I am a cashew

Evergreen columnist writes about her path to self discovery through nuts 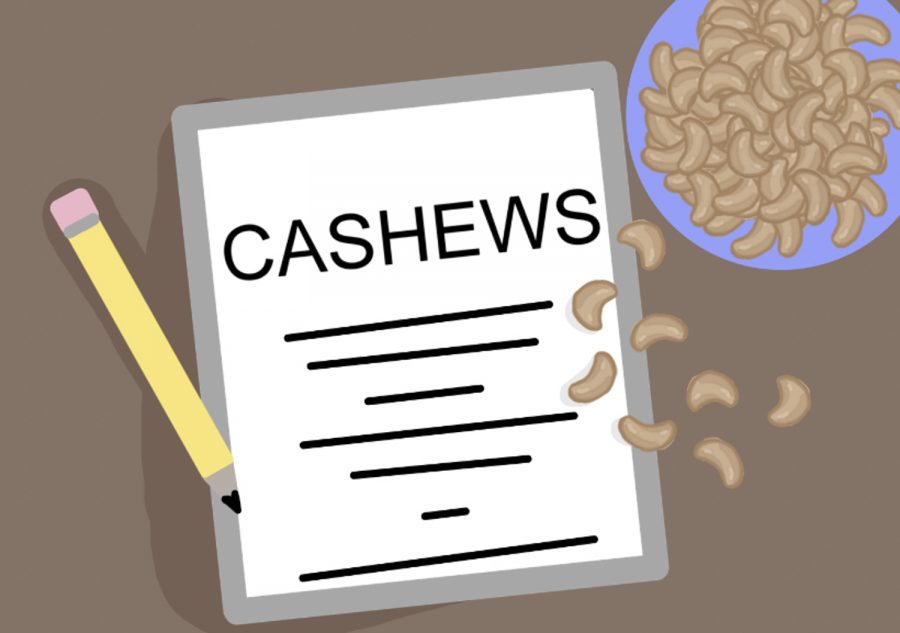 Have a story of your own you want to submit to Culture Brew? Let us know at mint@dailyevergreen.com.

I am a cashew.

Yep, that’s right. Based on a reputable personality quiz I took in sixth grade, I am the most forgettable of the mixed nuts. So sayeth the quiz: “You’re often the last person to get noticed. But whenever you’re gone, people seem to notice right away!”

My friends laughed when I showed them. In summary: they agreed that I’m more memorable when I’m not there, and then turned around to talk to each other when I tried to defend myself.

At first, I was offended, especially since they didn’t go on to include how much they missed me when I was gone, but over the years I’ve come to accept it. There’s a sort of social balance to being a cashew, a balance of filler and flavor.

Sometimes it’s almost like having a superpower. People will forget I was there for some event, or forget that they told me a secret. Suddenly I know something they don’t know that I know, and I either come across as a really good listener or actually psychic.

But for the most part, throughout grade school I spent my cashew-y days flying under the radar. Sometimes I struggled with my inability to stand out. I have two very talented older sisters, and they were both making massive strides in the becoming-your-best-self department.

Some of you are probably familiar with this one. You ever walk into the first day of class, taking a deep breath, relieved to turn over a new leaf from last year, ready to start anew? And then this happens:

“Miss Young, eh? I’ve had both of your sisters, and they were fantastic students. I expect great things from you!” (Insert condescending wink right before getting sent to the middle school equivalent of time-out for forgetting the latest assignment.)

I always felt like I was leaps and bounds … behind. My oldest sister Jaime studied biochemistry in undergrad on a full-ride scholarship. Sometimes we would talk on the phone, and it would go a bit like this:

Jaime: So what have you been doing in school?

Me: Uh, you know. Math. And science. In creative writing I wrote mean comments about a girl I hate, and people laughed. So that was pretty weird but I’m not upset. What about you?

Jaime: We started this lab where we perform genetic testing on fruit flies, and the other day I dissected a mouse brain for the third time. It was super boring, especially since the mouse was dead this time. Also, I learned how to run an electron microscope to look at viruses that attack human kidney cells, which was pretty cool. Also, I signed up for tai chi. With swords.

She’s a classic walnut, hard to crack but brilliant on the inside. As a lay-low cashew, I used to feel a lot more stress over that. That’s not even counting the parallel crisis I felt with my middle sister Kristin, a daily-grind Renaissance woman with mystical music superpowers and a knack for research papers — I realized pretty quick there is no contending with a through-and-through peanut.

Thus began my bildungsroman of finding my own niche. I thought for a while my calling might be art, but that idea suffered several long and painful deaths.

After all, you can only sketch so many human faces before realizing the only reason you draw faces is because you suck at hands. You can only draw so many hands before you realize how creepy knuckles are. After that, you sort of stop wanting to be a sketch artist and start wanting to do oil paintings of sunsets. Because no one has ever thought of that before … and sunsets don’t have knuckles.

It took me a while to realize my real skill as a cashew had been there, in the background, all along: writing. In early grade school I pursued it with a passion, and first got published in a magazine when I wrote a story in second grade. Granted, by mistake they only printed the third page (enter: the cashew effect), but back then I saw it as the greatest accomplishment of modern history.

When I write, I feel like I’m my most authentic self. I can struggle to express myself in-person, which was especially amplified after I moved to a new town my sophomore year. My IRL presentation was so bad, at my senior all-night party two years later, a friend told me he used to think I was a total b-tch because I never talked to anyone early on.

My writing dreams definitely got slow-roasted into a hobby for a while, though. On my last day of high school calculus, handing in my test, my teacher asked what I would be studying here at WSU. When I said creative writing, he looked the most disappointed I’d ever seen him (and trust me, with my quiz grades, I’d seen a lot). His sending words? “That’s a shame.”

Ouch. But that wasn’t the first time. My cashew-y tendencies prevented me from fighting back when someone goofed on my career choices, and sometimes kept me from even just saying hi to someone so they didn’t see me as, and I quote, “a total b-tch.”

But, praise be, college happened. Aside from learning how to socialize like an actual human being, I became a real-life published author at the beginning of this year, and in just a few weeks I will hold in my hands the coveted English degree. Of course, there’s my vast history with The Daily Evergreen.

Even if I don’t land a multi-million dollar salary on my writing skills alone (and trust me, there are always people willing to remind me of that), I know it’s a quiet but prominent mark of my personality.

I may not be as down-to-earth as a walnut, or as fun and essential to any mix as a peanut. But think about it: aren’t there always cashews in every mix, hiding behind the chocolate chips and, perhaps, the rare macadamia nut? Providing sustenance and leaving their mark, whether you consciously see it or not?

So yeah, I might be low-key, and a bit of a nutcase. But I’m happy to keep on doing my cashew thing, and if I’m lucky, my writing might get me remembered before I’m out of the room for good.

Though I guess some of the most famous writers didn’t reach any kind of acclaim until after they died, so I might just have to take what I can get.