WSU redshirt senior says they are counting down the days 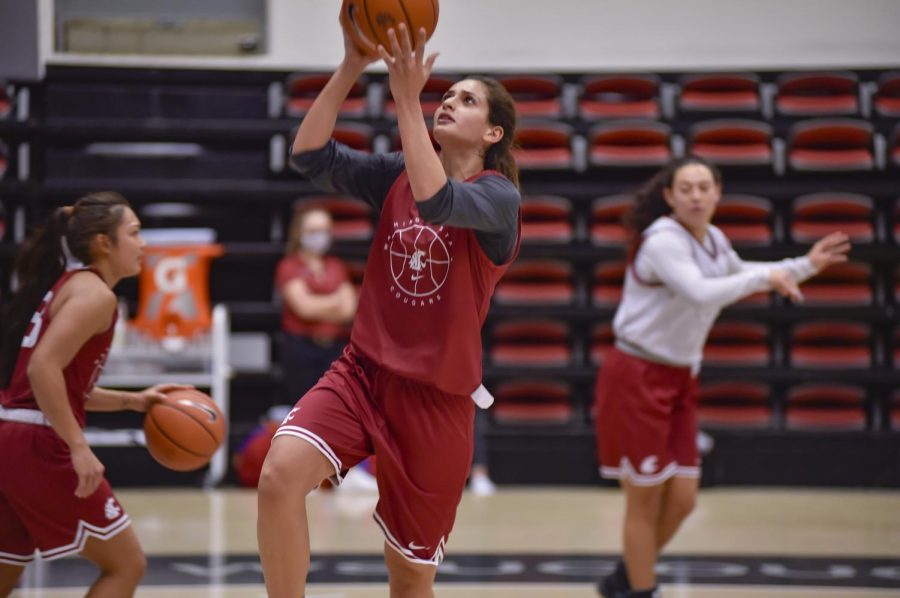 Junior forward Shir Levy goes up for a shot during practice in preparation for the expected December season.

Going into the 2020 season, five women’s basketball teams from the Pac-12 are ranked in the NCAA Top 25. However, Washington State University is not yet one of them. Even though the team’s first game is still yet to be determined, there is optimism circling around the players and coaches.

“We were counting down the days,” said WSU redshirt senior Krystal Leger-Walker.

Leger-Walker is both an international and transfer student. Before sitting out last season due to NCAA transfer rules, the New Zealand native played for three years at University of Northern Colorado under coach Kamie Ethridge.

Ethridge left Northern Colorado in 2018 and is now the head coach at WSU.

“Knowing her and playing for her prior was the main reason I chose to come here,” Leger-Walker said.

Junior forward Shir Levy is also an international student living in Pullman, which is 6,724 miles away from her hometown Ness Ziona, Israel.

“My decision [to play for WSU] was coaching-related,” Levy said. “Talking to the coaches, listening to their values, and knowing that I could trust them just made me want to be a part of what they’re trying to build.”

Ethridge has coached for two seasons at WSU and is looking to make a splash going into her third year. When she took over the team in 2018, Ethridge said she knew she had a project on her hands.

“In this league, you just can’t win with one or two players,” Ethridge said. “We had to rebuild our roster, we had to get more players.”

In the 2019 campaign, Ethridge led the Cougars to an 11-win season in a total of 31 games, which is an improvement from the nine-win season the team posted in Ethridge’s first year as WSU head coach.

Despite the difficult schedule, the NCAA ranked WSU as the No. 11 team out of twelve Pac-12 schools, just above California, which placed last.

“Everyone on our team likes to be the underdog,” Leger-Walker said. “We see where we rank. It’s definitely something that motivates us.”

Some players said the team culture is the strength of the team.

“When the coaches started to build this program, they started by giving presentations about the culture and the core values of the team,” Levy said.

Ethridge said she is proud of the culture she established.

“The culture is in a better spot,” Ethridge said.

While culture may be a bullet point for this year’s team, Ethridge said the team strength comes from a specific group of players.

“I think I’ve always known this,” Ethridge said. “Guards win games for you. We’ve rebuilt our roster to get more guards.”

A huge point of interest from the outside looking in this preseason has been how WSU will replace the star players who left the program at the end of last year. Instead, the team is trying to focus on the positives.

“What we’re building on is year three,” Ethridge said. “Our discipline is better; our work ethic is better. The groundwork has been laid.”

Both the players and coaches said they expect to see improvement in this year’s team.

“I want to see us start to move up the standings. Obviously, the NCAA tournament is something we aspire to every year,” Ethridge said. “That’s where I feel this program is headed.”

The team was supposed to tipoff Nov. 25 at home against Eastern Washington University, but that game was postponed until presumably mid-December. There is still no date set in stone regarding when the team will start.

On Wednesday, men’s basketball coach Kyle Smith tested positive for COVID-19, putting the rest of the teams on high alert.

“You never know who is going to be out or what’s going to happen,” Levy said. “We need to be prepared for that.”