Cougars open their season at home 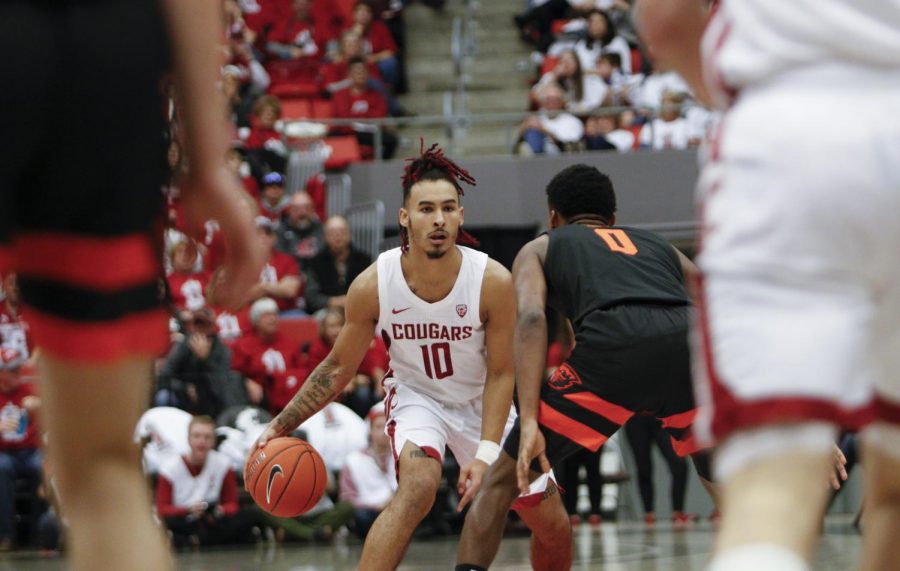 Senior guard Isaac Bonton is guaranteed to start for WSU on Wednesday against Texas Southern.

The WSU men’s basketball team will open their season against the Texas Southern University Tigers at 8 p.m. PST Wednesday at Beasley Coliseum.

This past week, head coach Kyle Smith tested positive for COVID-19 after experiencing “minor symptoms.” Smith will not be able to attend the game on Wednesday, so assistant coach Jim Shaw will replace Smith as head coach.

Shaw said this was an obvious adjustment for the team to work around, but Smith has continued to keep in contact with the team during practice via Zoom.

“Though it’s been an adjustment, I think it’s been minimized a lot by how much involvement he still has,” Shaw said. “We’ve talked to him more since he’s been gone than we did when he was here.”

WSU had an impressive offseason this summer as the school recruited the 33rd ranked class in the nation; the Cougars ranked 99th last season. Shaw said this freshman class will have an impact on the team early this year, mentioning names such as center Efe Abogidi, guard TJ Bamba and forward Andrej Jakimovski to have the most playing time across the class.

However, the team has not figured out a universal rotation to go off of yet this season.

“We have league games next week, and I certainly don’t think we’ll have our rotation etched in stone by then,” Shaw said. “I think for sure, by the time you get to Christmas, you want to have your rotation pretty well set.”

With the departure of forward CJ Elleby this offseason, all heads are turned towards senior guard Isaac Bonton to step up as the top scorer for WSU after averaging just over 15 points a game last year.

Junior forward Aljaz Kunc and the rest of the team was ecstatic to see Elleby drafted in the second round of the NBA draft last week, but they’re comfortable enough to make up for his impact with the current roster at WSU.

“It’s a hard loss, that’s a lot of points and minutes to fill,” Kunc said. “I think with the system we have this year with a lot of different pieces, the incoming freshman class, all the returners improving from last year, I’m pretty confident that we can fill his role.”

The two largest improvements WSU made this offseason is by far length and athleticism. The Cougars recruited two 6-foot-10 centers after just having one lone center on the team last season in sophomore Volodymyr Markovetskyy.

The team also recruited a pair of forwards who stand at 6-foot-8 and 6-foot-7, both of which are taller than probable starting power forward, senior Tony Miller.

Sophomore guard Noah Williams said the team works much harder during practice and is more competitive than last season. This change in the team’s mindset should translate well into this season he added.

“I feel like that should transfer over in a game; you practice how you play,” Williams said.

This home contest against the Tigers also excludes the attendance of fans in the stands as the university continues to adhere to the Pac-12’s protocol for social distancing. Williams said the absence of fans won’t really affect this team at all this season considering their attendance numbers last year.

“Basketball is all about fighting through adversity,” Williams said. “It shouldn’t affect us too much.”

As Shaw prepared this Cougar basketball team for their matchup against Texas Southern, Kunc said his intense presence at practice pushed this team to be highly motivated for their season opener.

Wednesday’s game will tipoff at 8 p.m. PST and will air on Pac-12 Network.