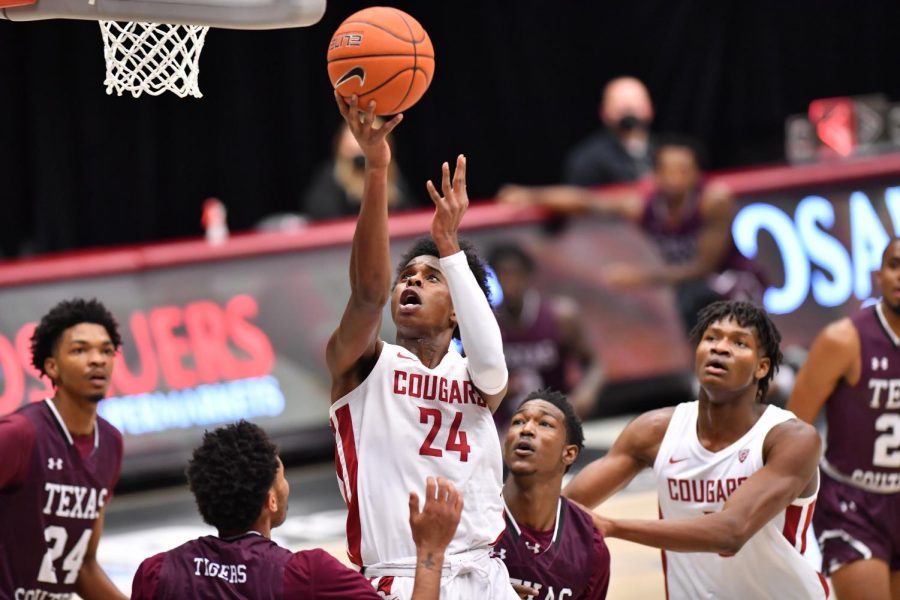 The Cougars defeated the Texas Southern University Tigers 56-52 on Wednesday at Beasley Coliseum after a second-half turnaround and a late-game holdout.

After testing positive for COVID-19 over a week ago, WSU (1-0, 0-0) head coach Kyle Smith was officially cleared Wednesday afternoon to join the Cougars on the sideline. The team knew there was a chance of Smith’s return since Monday, said junior forward Aljaz Kunc.

“We were ready to play regardless,” Kunc said. “Coach Smith did an amazing job to get us ready while he was out.”

Bonton made a total of 11 free throws out of 13 attempts and 21 of his 27 points came from the second half alone.

Bonton had a tough first half shooting the ball, only making one field goal on 13 attempts. He said this was likely due to the amount of time the team has not played a game, and he suspects the shooting will find its way.

“It’s shaking the rust off, really,” Bonton said. “My mindset is always, as all our guys, is keep it aggressive, stay with it.”

True freshman center Efe Abogidi had a debut as the Cougars’ starting center. He scored nine points and led the team with eight total rebounds.

Other true freshmen, forward Andrej Jakimovski and guard TJ Bamba, made their debuts alongside Abogidi. Smith said he is proud of them and expects to give them extra playing time in the future.

There was a total of 11 lead changes throughout the game. Both teams had their fair share of scrappy runs in the first half as each side took advantage of the other’s mistakes early.

WSU played a total of 11 different players throughout the game, Smith said. This number of players will likely be refined as the season goes on.

“You want to reward guys who had a really good fall,” Smith said. “They’re good players, they work hard.”

At the half, Texas Southern led WSU 31-28 after holding the Cougars to just 25 percent from the field. Ebogidi led the Cougars in points and rebounds with nine and six respectively.

Bonton’s first-half struggles quickly went away as he scored 12 points in the beginning 10 minutes in the second half. The rest of the Cougar offense put up just seven points throughout the second half, four coming from Kunc and three coming from sophomore guard DJ Rodman; all from the free-throw line.

Bonton was the only Cougar to score a field goal in the second half, and the Tigers decided to make an adjustment to try and make a comeback down 42-50 with five minutes to go.

Texas Southern adjusted to an aggressive full-court defense in the final minutes of the game. However, WSU moved the ball well and did not give up to the pressure in the backcourt. WSU had just two turnovers in the final five minutes.

Despite the comeback attempt from the Tigers, WSU secured a four-point lead with 24 seconds to go. Sophomore guard Noah Williams forced a charge on the Tigers and sealed the Cougars’ home-opening victory.

WSU shot just 28 percent from the field and about 18 percent from three against Texas Southern. Kunc said the team needs to focus more on getting better shots for their upcoming game on Saturday.

“We’re a better shooting team than we exhibited today.” Kunc said. “We just have to get better looks at the rim.”

The Cougars’ next matchup is against the Eastern Washington University Eagles at 8 p.m. PST on Saturday at Beasley Coliseum. The game will air on the Pac-12 Network.