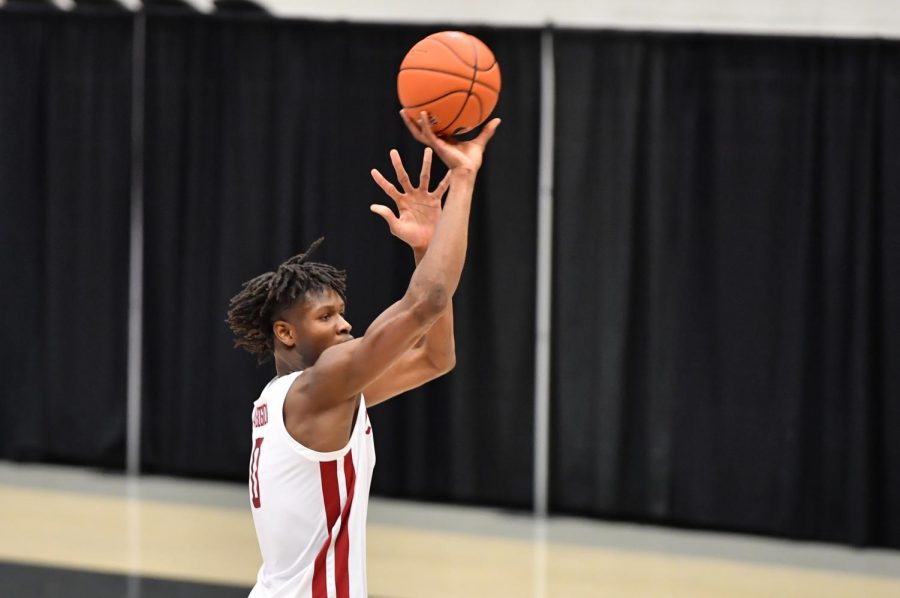 Freshman center Efe Abogidi will likely be starting for WSU on Saturday against Eastern Washington.

Eastern Washington was scheduled to start its 2020-21 season against the No. 20 University of Oregon on Nov. 25, but the game was canceled after two players on EWU tested positive for COVID-19. The team did not have enough scholarship players available to play in the game.

No additional cases have been announced by Eastern Washington approaching Saturday, and the team has remained healthy since their cancelation. Saturday’s game should still proceed as scheduled.

Senior guard Isaac Bonton opened WSU’s 2020-21 season with a 28-point outing against Texas Southern on Wednesday. After a dismal first-half shooting 1-13 from the field, Bonton scored 21 points in the second half and was the only player on WSU to make a field goal in the second half.

This first-half performance did not faze Bonton too much, and he said he’ll keep pushing himself as the season goes on.

“Games like this happen, we haven’t played in seven to eight months,” Bonton said. “So just staying with it, finding a way to win.”

The Eagles also welcome back their leading rebounder from last year, redshirt junior forward Kim Aikin Jr. He averaged almost 10 rebounds a game at 9.7, and this led the conference as well, despite his 6-foot-7 frame.

WSU rebounded the ball in the win against Texas Southern with 40 total rebounds, 17 of which came from WSU’s guards.

Despite the team effort on the boards, junior forward Aljaz Kunc said the team needs to do better as a whole when it comes to rebounding.

“We still got to do better, [Texas Southern] outrebounded us,” Kunc said, “but I feel like we’re going in the right direction.”

Eastern Washington’s scoring offense last season was first in the Big Sky Conference at almost 81 points per game. WSU’s defense gave up 80 plus points just six times last year, all of which were losses.

After playing 11 different players against the Tigers on Wednesday, Smith said the rotation will likely fluctuate as the season goes on, throwing freshman forward Andrej Jakimovski and freshman guard TJ Bamba’s names out there.

“Bamba, I thought, did a good job [on Wednesday] of coming in on a cold second half,” Smith said. “Andrej’s good, we’ll get him in there eventually. We need him, we’re going to need him.”

WSU tips off against Eastern Washington at 8 p.m. Saturday at Beasley Coliseum. Fans won’t be able to attend the game, but the game will air on the Pac-12 Network.