Another close win for WSU at home 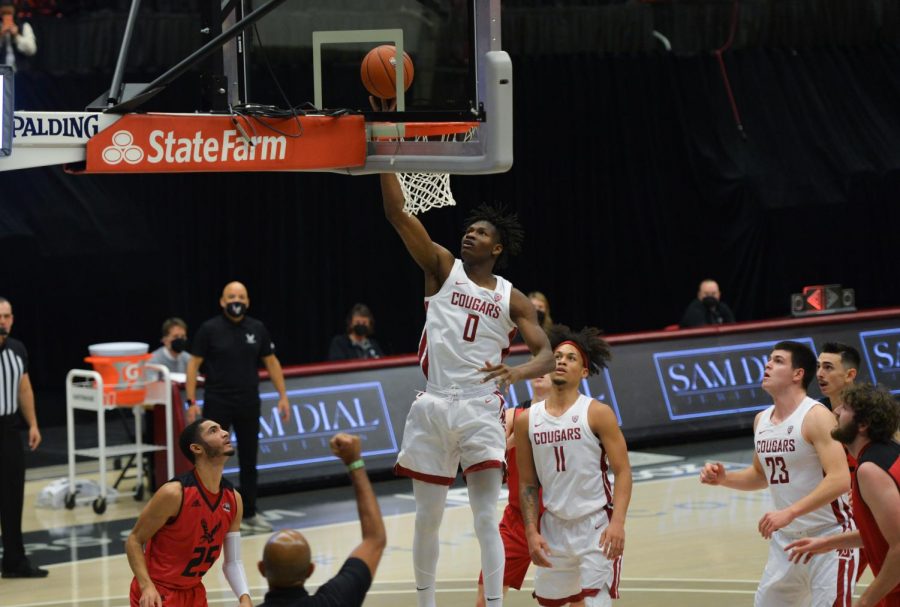 Before fouling out in the second half, freshman center Efe Abogidi put up 10 points, a block and two steals.

The Cougars’ near 68-year winning streak still stands after a nail-biting finish in Beasley Coliseum.

The WSU men’s basketball team (2-0, 0-0) defeated the Eastern Washington University Eagles 71-68 in a comeback effort on Saturday at Beasley Coliseum.

Sophomore guard Noah Williams led the Cougars in scoring against the Eagles (0-1, 0-0) with a career-high of 19 points. Williams also recorded eight rebounds, three assists and four steals, all of which either led or tied for the most for the team.

This is the second straight game for WSU that was essentially decided off a late drawn charge from Williams.

“It just feels like I need to get the stop and do whatever to help my team win,” Williams said.

Senior forward Tony Miller did not play against the Eagles because he was sidelined with a walking boot and a knee scooter. Miller’s status in the coming games is still unknown at this time, said head coach Kyle Smith.

“It’s been this on and off thing for him,” Smith said. “Just want him to get healthy and feel good about it.”

The Eagles’ leading scorer last season, Jacob Davison, had somewhat of a quiet game with just 12 points on 4-10 shooting from the field. Davison went through foul trouble toward the end of the first half and had some more foul trouble at the beginning of the second half. This led Davison to only play 22 minutes, the least amount of time played by any Eagle player on Saturday.

After a Bonton-centric offense against Texas Southern, WSU’s scoring offense against Eastern was much more spread out. Nearly every player who touched the court for WSU scored at least one field goal.

Despite this balanced scoring attack, Smith is still unsure what the team’s culture is on offense.

“Our identity right now is we’re good defensively, really good at that face of the game,” Smith said.

WSU struggled from the field early in the game as the Cougars shot just 1-8 in the first five and a half minutes. Eastern’s defense forced WSU to turn the ball over four times in this time frame as well.

Freshman forward and guard Andrej Jakimovski and TJ Bamba each scored their first points as Cougars during the team’s comeback attempt. All of the active first-year WSU players scored at least one field goal in the first half alone, making up almost half of WSU’s points in the half.

Freshman center Efe Abogidi picked up his third foul of the game with 6:50 left in the half and was benched for the remainder of the half. Abogidi would later foul out of the game with 7:54 left.

“I just feel like I got to work on it a bit,” Abogidi said. “It’s going to be a problem for me if I keep fouling in the game.”

Jakimovski continued to provide a spark plug for this Cougar offense as he made a second three with 6:29 left in the half. However, this spark gradually ran out for WSU as the Eagles finished the final five minutes of the half on a 16-12 run.

Eastern led WSU 39-33 at halftime after sinking seven threes and outrebounding the Cougars by five boards. Williams led the Cougars in scoring with seven points.

WSU’s second half started out hot as the Cougars tied the game at 44 with 14:56 left in the game. Abogidi scored WSU’s first seven points of the half: a layup, a deep two, and a three-pointer for the freshman center.

WSU took its first lead of the game with 13:48 left of a floater from Fitzgerald-Warren, but the Eagles did not give up the lead that easily as they regained the lead just seconds later.

This led to a back-and-forth battle between WSU and Eastern until the final buzzer. The effort from Williams in the final six minutes pushed WSU forward for the win; he scored 10 points during this time frame.

The Cougars face their first pair of conference opponents of the season next week. Smith said this early of a conference matchup in the season is odd, but the team will be ready for a competitive bout with Oregon State and Colorado.

WSU will face the Oregon State Beavers at 7 p.m. Wednesday at Beasley Coliseum. Fans will not be allowed to attend the game, but the game will air on the Pac-12 Network.