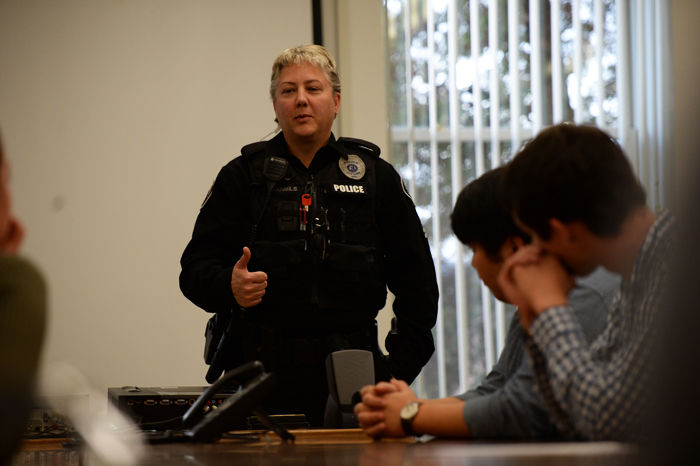 Showcased by mainstream media outlets, the U.S. has been the victim of several mass shootings, specifically on college campuses and at public schools.

Daniels started the session with the video “Shots Fired: When Lightning Strikes,” produced by The Center for Personal Protection and Safety.

In the video, Director Jim Sporleder and Executive Director Randy Spivey discuss the three main concepts people should inherit and consider to maintain a survivor mindset: run, hide or fight. Spivey and Sporleder said if someone believes they hear something that sounds like a gunshot, they should treat it as such and seriously assess the situation.

All noise-making items, such as cell phones, should be silenced, all doors should be locked and everyone should spread out to make it harder for the shooter to target people. As a last resort, one should be willing, able and prepared to confront the shooter in a life-or-death scenario, Sporleder and Spivey said.

Everything in a given location can be used a weapon, Daniels said. She encouraged targeting the softest parts of the body first, particularly the eyes.

“It doesn’t take much to pop those suckers out,” she said.

Taking questions from the audience, Daniels was asked if officers were trained to kill active shooters.

“As officers, our immediate goal is to stop the threat,” she said.

Daniels was also asked if there is a way to know when the threat has passed, to which she said there usually is not.

Spivey and Sporleder said in the video that people should hold up their hands and refrain from any sort of aggressive action when approached by an officer in an active shooter scenario, as there is no way for an officer to tell who is and is not a threat.

Referencing social media, Daniels said people should be careful of what they see and post online, as conflicting information and backlogged phone lines makes officers’ jobs a lot more difficult.

Daniels said she once received a report of a WSU student’s relatives being concerned for his wellbeing, which escalated to a campus-wide panic due to erroneous social media posts.

“Be very careful when you see something on social media to not believe it,” Daniels said.

Asked several questions regarding response tactics, ranging from playing dead to the effectiveness of pepper spray, Daniels said that everyone should make their own judgements based on the situation at hand.

Daniels said it is important for students to contact police if they notice abnormal or suspicious behavior from peers.

“We have stopped active shooters in the past,” Daniels said.