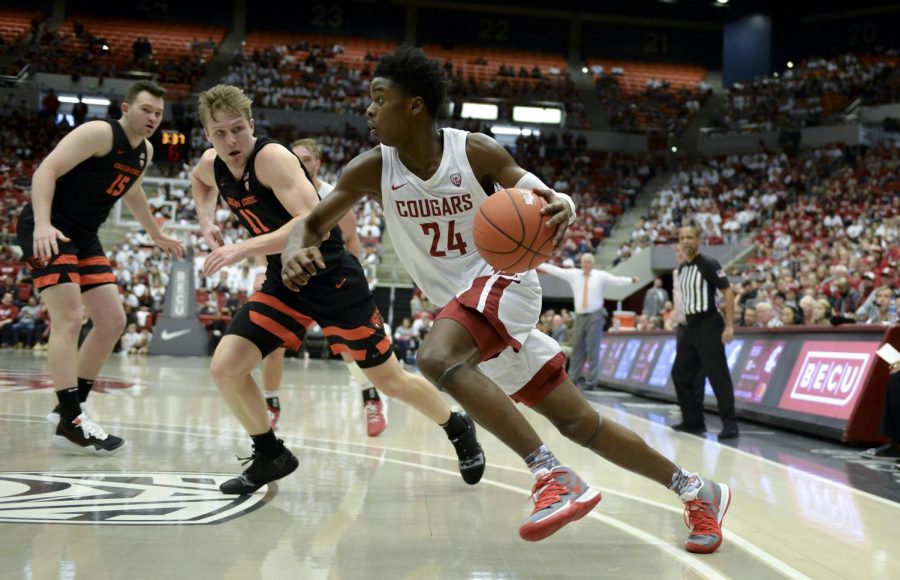 Sophomore guard Noah Williams said WSU will have a great start to its conference this season after back-to-back close finishes in Beasley.

Fans will not be allowed to attend the game, but the game will air on the Pac-12 Network.

The last time WSU (2-0, 0-0) played Oregon State (2-0, 0-0) was in January 2020. This game is mostly remembered as the day former WSU basketball player and current NBA star, Klay Thompson, was honored with his jersey retirement at halftime.

Fans may also recognize this game because senior guard Isaac Bonton had arguably the best game of his WSU career last season. Bonton put up a near triple-double with 34 points, eight rebounds and eight assists.

Head coach Kyle Smith said this game obviously has a huge difference in stature compared to the Klay Game, and the Beavers will have a different matchup this time around.

Despite the Cougars’ all-around scoring attack against Eastern Washington on Nov. 28, Smith said the team’s offensive identity is still unknown but will define itself as the season goes on.

Oregon State had two notable departures this offseason: senior forward Tres Tinkle, who signed as an undrafted free agent to the Los Angeles Lakers, and forward Kylor Kelley, who graduated. Both players left holes for the Beavers to fill this season on both sides of the ball.

Tinkle led the Beavers in scoring last season with 18.4 points per game, which ranked third in the Pac-12. Kelley averaged 3.4 blocks per game last season, which not only led the Pac-12 but ranked second in the country.

Oregon State has made up for Tinkle’s scoring quite well so far with this year’s roster. The Beavers had four, almost five, players reach double-digit points against Cal on Nov. 25, and six players reach the same mark against Northwest University on Nov. 27.

Smith said Oregon State still has a dynamic scoring offense without Tinkle, mentioning the team’s junior forward and recent transfer from Nicholls State, Warith Alatishe, as a valuable part of that offense.

“They’re going to be more of a challenge to scout,” Smith said. “Hopefully we can disrupt them a little bit.”

Despite Kelley not playing in Oregon State anymore, Smith thinks freshman center Efe Abogidi will still face a bit of a challenge in the post against Oregon State. The Beavers still have quite a bit of length, he said.

“He’s still in the development stages, but he seems to get better each practice,” Smith said.

Abogidi fouled out of the game against Eastern Washington with 7:54 left in the game and only 10 minutes of playing time. Abogidi said foul trouble was the main problem for him during that game and that he needs to work on it during practice to avoid picking up those fouls in future games.

Alongside Abogidi, the rest of the first-year Cougars have continued to impress Smith and the rest of the coaching staff after the first two games of the season. Smith said there may be an additional freshman implemented into the starting lineup in the future, but it is still too early to tell.

Junior forward Tony Miller was sidelined on Nov. 28 against Eastern Washington with an apparent foot injury. Miller is doubtful to play against Oregon State and may miss more time than that.

WSU is familiar with playing through injuries, as the Cougars battled several injuries last season. Players like Miller, Bonton and former senior forward Jeff Pollard all had notable injuries that sidelined each of them for at least one game.

Battling through adversity and winning back-to-back close games to start the 2020-21 season, sophomore guard Noah Williams said this 2-0 start will lead to greater things throughout the rest of the season for the Cougars.

“I feel like we’re going to have a great Pac-12 start if we just play as hard as we’ve been playing,” Williams said, “and just keep playing through adversity, we can win, win a lot of games this year.”