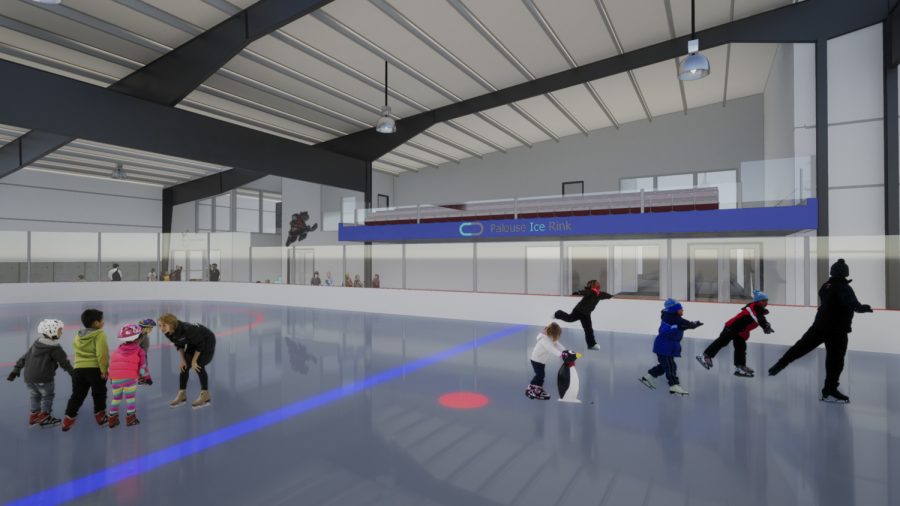 The Palouse Ice Rink will move into the former Northwest River Supply Co. building to become a multipurpose space that will be used year-round.

After almost 15 years in the making, the Palouse Ice Rink owners plan to build a new facility in the former Northwest River Supply building in Moscow with hopes of opening its doors to the public by October 2021.

The space at 3009 S. Main St. will include a 100-by-200 foot ice surface, locker rooms and classrooms for the Science on Ice program. The construction will also provide room for an event area and a lobby with indoor plumbing, said Tony Mangini, vice president of the Palouse Ice Rink board.

The rink will be designed as a community gathering place for years to come, which will be called the Parks Recreation Activity Center, he said.

“We’ll have a full-size sheet of ice,” Mangini said. “Whether you’re playing hockey or going to a public skate, they’ll be a lot more room for users.”

The Palouse Ice Rink board members will fully own the facility while the current building is on the Latah County fairgrounds, he said.

Since 2006, the Palouse Ice Rink board members planned to build a new facility. The original plan was to construct a new building from the ground up on the current site, but the project was projected to cost over $5 million, so it was not feasible, he said.

The board has raised $800,000 so far and received a $1 million pledge from the City of Moscow, he said. The group needs a total of $3 million to finish the project, leaving them to find $1.25 million more.

The Northwest River Supply company was looking to sell the property, so the perfect opportunity arose, Mangini said.

“If we didn’t follow up on this opportunity, it’s difficult to see a path where we would’ve been able to be successful later,” he said.

The supply building brings the opportunity to repurpose a significant landmark in Moscow for public use, Mark McGuire, Palouse Ice Rink board president, said.

Mangini said the rink will be designed for college students, high school students and younger children to socialize.

With new classrooms and more ice surfaces, the Palouse Ice Rink’s popular Science on Ice program has room to expand, he said.

Science on Ice is an opportunity for fifth-grade students from around the area to learn science lessons combined with physical education and fun skating led by University of Idaho professors, Mangini said.

“It’s something that gets the students out of the classroom and excited about education,” he said. “It’s one of the things we’re really proud of.”

The students complete hands-on experiments on the ice then get to ice skate with other students and friends after, he said.

“Our opening in 2021 will be a great time for students new to the area to enjoy the ice rink as well as families and year-round members of the community,” Mangini said. “It’s something to look forward to and that has a lot of value right now.”