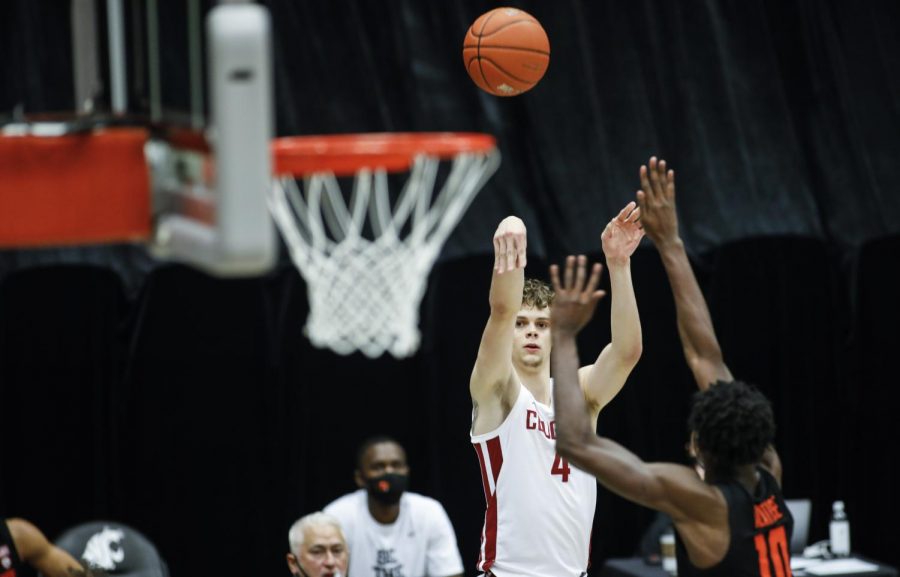 Junior forward Aljaz Kunc finished the game with 12 points and a drawn charge with 22 seconds left to give WSU the win.

The WSU men’s basketball team defeated the Oregon State Beavers 59-55 after yet another nail-biting finish Wednesday at Beasley Coliseum.

After sophomore guard Noah Williams made back-to-back, game-winning drawn charges in the first two games of the season, another drawn charge essentially won the game for WSU once again. This time it came from junior forward Aljaz Kunc.

Kunc said defense for WSU is one of the main focal points in practice, and the team’s offensive struggles will figure itself as the season goes on.

“Defense keeps us alive, and that happened today,” Kunc said.

Despite recent offensive trouble for the Cougars, WSU had four players score in double digits against Oregon State. Kunc and Williams each put up 12 points apiece, but junior guard Isaac Bonton and sophomore forward DJ Rodman put up 15 and 13 points, respectively.

Freshman forward Andrej Jakimovski took over for Rodman in the starting lineup, but Rodman managed to have more success forward against Oregon State.

After going scoreless in the first half, Rodman had a great second-half performance where he scored all of his 13 points, a new career-high for him. Rodman also achieved a new career-high in three-pointers made with three.

Rodman said head coach Kyle Smith approached him at halftime and told Rodman the team needed a big performance from him in the second half. Rodman felt like he needed to step up for WSU to come out with the victory.

Jakimovski played just 10 minutes and had two shot attempts against Oregon State. He finished the game with zero points. Smith said Jakimovski earned the starting spot in practice earlier in the week, and the team thought his shooting ability would help the team offensively against the Beavers.

“Not worried about Andrej. He’s going to be a good player,” Smith said. “It’s just part of the process.”

Freshman center Dishon Jackson was the next freshman player to make his official debut for WSU against Oregon State when he checked into the first half. Jackson played about nine minutes and missed both of his free-throw attempts during his lone trip to the line, and his only shooting stat on the night.

Kunc said everyone on the bench was ready to get their name called to go out and give it their all against the Beavers. Jackson just needs a bit more playing time to set his feet into the college basketball atmosphere, he said.

“Of course, he’s going to need a couple more games, a little experience to figure out the game,” Kunc said. “I feel like everyone is coming along and as the season goes on, we’re going to need all the pieces we got.”

Kunc started out the first half strong with eight points in the first five minutes of the game. He would then go scoreless until late in the second half.

Williams accompanied Kunc in the first half with eight points of his own. The Cougars led by seven points with a little less than 13 minutes left in the half.

Fortunately for WSU, Oregon State still had some trouble catching up, but the Beavers eventually clawed their way back into the lead going into halftime.

WSU started the second half going scoreless for another almost three minutes, while Oregon State extended its lead to double-digits with 18:53 left in the game. A jump hook from Williams at 17:10 ended the drought and spawned a quick 5-0 run to bring the score to 33-28. Oregon State still led.

Bonton started to find his stroke in the second half after going 1-8 in the first half with just three points. This extra effort from Bonton gave WSU the opportunity to inch back into the game.

WSU eventually tied the game up at 40 with just over 10 minutes left in the game and even pulled away with a seven-point lead with 5:47 left.

But much like the first two contests, the game went down to the wire once again.

WSU led 56-54 with about a minute left, and a trip to the free-throw line from Oregon State cut the lead down to one with 59 seconds left.

With 22 seconds left, Kunc made his drawn charge defensive play and went to the free-throw line to hit back-to-back free throws. After another failed offensive drive from Oregon State, Bonton hit another free throw to extend WSU’s lead to four and the Cougs finished the game with the 59-55 lead.

Smith paid homage to former WSU coach Tony Bennett and his defensive-minded approach to the game. This Cougar team needs to have the same mindset, Smith said.

“That needs to be our calling card, too,” Smith said. “Keep hammering it home and getting better.”

Rodman was awarded the player-of-the-game for the first time in his WSU career. He credited the defense with the win and has no worries about the offense finding solutions to be more impactful in the future.

“The offense will come, with us being so young, our freshmen are a little sped up,” Rodman said. “But that’ll obviously come with experience.

WSU will go on the road for the first time this season to face the Colorado University Buffaloes at 1 p.m. Dec. 5 at the CU Events Center in Boulder, Colorado. Fans will not be allowed to physically attend, but the game will air on the Pac-12 Network.