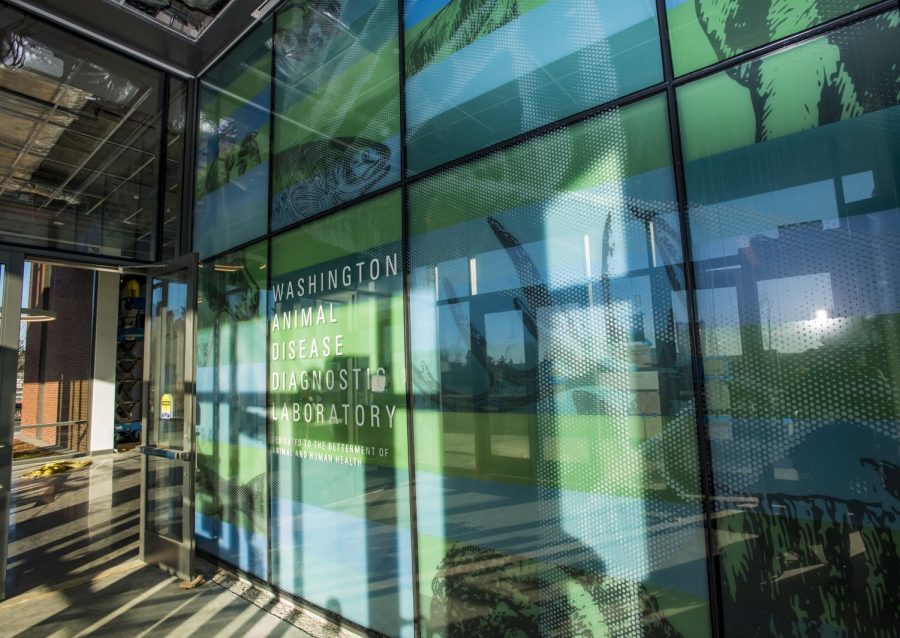 Global Animal Health Phase 2 will have laboratory spaces for diagnostic testing and research, as well as spaces for lectures.

The three buildings cost the university more than $100 million total, which came from state funding, donations and department money.

Global Animal Health Phase 2 will have laboratory spaces for diagnostic testing and research, as well as spaces for lectures, Baszler said.

The American Association of Veterinary Laboratory Diagnosticians sets standards that WADDL must meet to remain accredited as a diagnostic facility. The upgraded facility will help WADDL meet accreditation criteria for biosafety and biosecurity compliance, testing capacity and system complexity, he said.

The building is on Olympia Avenue behind WSU’s Veterinary Teaching Hospital, Sweeney said. It will be connected to its partner building, the Allen Center, with a bridge.

The building will be completed in late January and staff will start moving into the building in March or April, she said.

The building is part of the V. Lane Rawlins Research and Education Complex, he said. It is located next to Vogel Plant Biosciences on Stadium Way.

The new Plant Sciences Building was completed in late October and most of the faculty have finished moving in, Baerlocher said.

The building cost about $66 million, which came from state bonds and department funding, according to a document from WSU Facilities Services.

Project Back to Omaha

The baseball clubhouse, officially called Project Back to Omaha, was completed in early November. Most of the coaches and athletic training staff have moved in, but student athletes will not occupy the building until January, said Shawn Deeds, senior associate director of athletics capital projects, events and facility operations.

The facility is named Project Back to Omaha because WSU baseball has not been to the college world series in Omaha, Nebraska, since 1976, he said. The team’s goal is to return back to Omaha to play in the championship.

“It’s everything you need, from a student-athlete perspective, contained in one building,” he said.

Baseball players previously had to walk across campus from Bohler Gym to practice at Bailey-Brayton Field, he said. Now, Project Back to Omaha is located adjacent to the field on North Fairway Road so players have everything they need next to where they play.

The building cost $10 million, which came entirely from donations, Deeds said. Several of the donors were on the 1976 WSU baseball team that went to Omaha.

“Anytime we can give [student-athletes] a product like this, I’m very proud to say I’m a Coug,” Deeds said. “We have all this so we can get better players here … and get that program back to Omaha.”