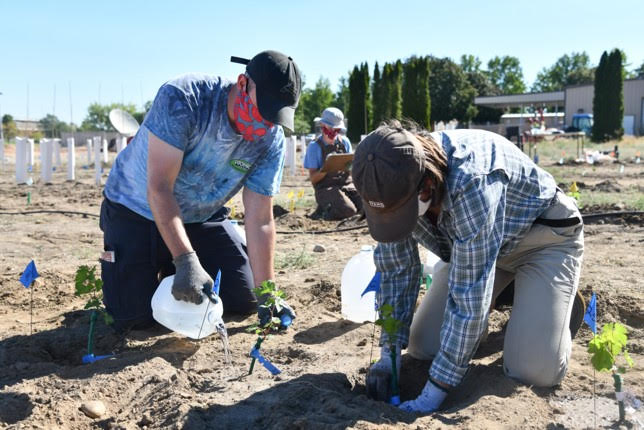 Arbuscular mycorrhizal fungi can help plants absorb light and water. They expand the plant’s root zone and act as a biofertilizer.

A team at WSU Tri-Cities is researching a type of fungus that could replace chemical fertilizers in crops.

Using the fungi would not require growers to fertilize their crops every year, said Tanya Cheeke, assistant professor in WSU’s School of Biological Sciences. Once the fungi are added it would serve as a biofertilizer for the plants.

“One of the things about these fungi is that once you add them to the soil, as long as they’re not killed in some way, they are generally self-propagating,” Cifizzari said.

The fungi are sold at farm stores and online, Cheeke said. They come in packages and are added to the plants as an alternative to chemical fertilizer. The fungi can be used in a wide variety of crops and are an important part of sustaining agro-ecosystems.

The fungi are beneficial to vineyards because of the two-year crop systems, Cheeke said. The fields are not tilled every year so the organisms have time to grow and take up nutrients.

The fungi form symbiotic relationships with plant roots and form threads that can collect nutrients and water for plants, Cheeke said. They expand the plant’s root zone and act as a biofertilizer.

The team has completed one greenhouse project so far and saw that the fungi increased wine grape growth, Cifizzari said. When no fertilizer is added or the plants are grown in low-nutrient soils, the fungi work the best. But if environments have high nutrient levels, they are not as successful.

“What we are predicting is that under low-nutrient conditions, the mycorrhizal fungi will help the grapevines get more nutrients,” Cheeke said. “We are expecting the plants that are inoculated to be bigger, and also to have more nutrients in their leaves.”

The experiment was done with Merlot and Chardonnay wine grape varieties, which are two common red and white varieties in the area, Cheeke said.

During the greenhouse experiment, the Merlot plants responded more strongly to the fungi than the Chardonnay plants, Cheeke said.

The greenhouse project is funded by the Washington State Wine Commission, Cifizzari said.

Cheeke applied and received different grants for her research from the Washington State Grape and Wine Research Program and the BIOAg program from WSU’s Center for Sustaining Agriculture and Natural Resources, she said.

There is an ongoing field study with Merlot plants that were planted in August. The plants will be analyzed next fall during harvest, Cifizzari said. It is a two-year study so there will be results in 2022.

The results of the field study are expected to be different from the greenhouse project because the plants will face natural weather conditions and microbial organisms in the soil, Cheeke said.

Phylloxera, an insect pest to grapevines is a problem in Washington, so grapevines are now being planted on phylloxera-resistant rootstocks, Cheeke said.

In the field research study, the Merlot plants were planted on their own and different rootstocks to test how the plants respond to the fungi, Cheeke said.

Other researchers have analyzed the fungi in other cropping systems, Cifizzari said.

The only crops the fungi cannot be used with are brassicas, which include broccoli, cauliflower, kale and collards, Cifizzari said.

“It would be really interesting to test them in potatoes because potatoes grow underground so they are having more physical contact with the fungi there,” Cifizzari said.

Some agricultural practices, like chemical fertilizers or pesticides, can cause harm to the fungi and cause it to die, Cheeke said.

Growers are hesitant to use the fungi because they do not know if it will actually work, Cheeke said. There is a lot of interest in the research, but more fieldwork results need to be collected before growers feel comfortable replacing their chemical fertilizers.

“The goal is definitely to help growers because Washington wine markets itself as sustainable,” Cifizzari said.