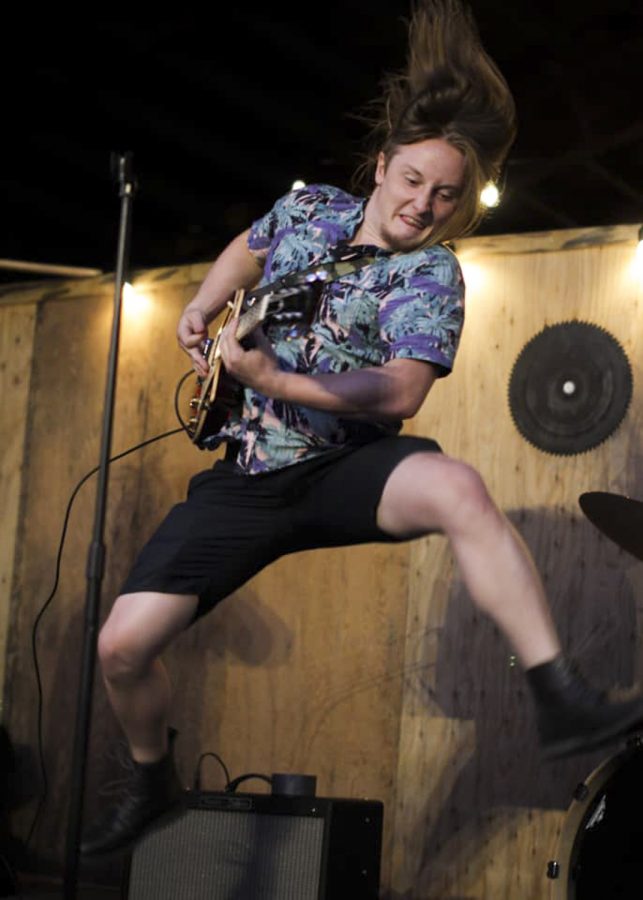 Senior Joel Roeber has been heavily involved with the local music scene, working with acts like North Paw and NUU WAVE.

Almost nothing went as planned for senior Joel Roeber going into this semester, but that hasn’t stopped him from working toward earning his degree.

Roeber, who will receive his Bachelor of Music in Music Education next semester, recently completed his senior recital in a non-traditional way because of limitations caused by the pandemic. The senior recital is pivotal to music students’ progress and ability to graduate, so he said the setbacks he faced were overwhelming at times.

“The story of my senior recital involves a lot of COVID taking away opportunities, and persevering anyway,” Roeber said.

Initially, he said his recital was scheduled for April 2020, which got canceled due to the breakout in COVID-19 cases. He couldn’t practice with any of the other people who were involved and had to reschedule for December.

A recording date was set for early November, he said, but that was pushed back when the recording studio’s producer had family members get sick with COVID-19. Roeber said his guitar professor, Gabe Condon, tried to help with the numerous setbacks.

“[Condon] gave me three options,” Roeber said. “Get the recital done somehow this semester, move it to sometime next semester or somehow get the university to waive it.”

Despite lacking several members he originally wanted for the recording, Roeber managed to get together with the other musicians and rehearsed for about 45 minutes. He then decided to record the entire thing live the next day in Bryan Hall with no studio involved.

Later, WSU alumnus James Carter added a saxophone part to the last two songs, recording separately in his own studio. He said they wanted to record altogether, but since he plays a “death cannon,” COVID-19 regulations dictated that he add to the recording remotely.

“It is what it is now,” Roeber said. “Even for as many things to go wrong as they did, we still managed to squeak it out.”

With that accomplished, Roeber said he will finish his School of Music requirements this semester. He will spend the spring semester student teaching to complete the education section of his major.

A prolific member of the music scene in Pullman, Roeber has been part of several music ensembles with Carter and other WSU music students, including North Paw and NUU WAVE.  Carter said he met Roeber through North Paw, as they would play gigs together at places like Rico’s Pub and frat parties.

“[Roeber] has a very eccentric music taste and also the skills to back that up,” Carter said. “If there’s something that interests him, he dives into it heavily.”

Roeber is currently working with Hunter Thompson, drummer and former WSU student, on a band project called Calligraphy. He described the project’s sound as “jazzy progressive and technical death metal.”

With Thompson living in Spokane now, he said, it’s been hard to collaborate, and the limitations of COVID-19 make it hard to find places to rehearse.

“If we record in an apartment, it’s either noise complaints or giving the neighbors a headache constantly,” he said. “We’re trying not to be deterred by the obstacles that have walled us in.”

Roeber already has an established discography to his name. He has recorded with NUU WAVE, which included Thompson as well, releasing a five-track EP in 2019 called “Initiation.” Additionally, he has recorded one song with Calligraphy called “Death of the Individual.”

He said the song currently features himself on guitar, bass and vocals, with Thompson on the drums, but he wants to add something to make it more eclectic. Maybe Carter can contribute on saxophone, he said, or some kind of synth.

“We’re confident that, like with Goldilocks, we’ll find just the right amount of spice,” he said.

Roeber also said he composed a jazz fusion piece as a ballad for one of his old friends and another former WSU student, saxophonist Branson Bell. He said he hoped to record it and send it to Bell sometime in the near future.

While the pandemic has caused a lot of roadblocks, it has also helped him become more proficient with his recording skills and equipment. However, as a student teacher at Chase Middle School in Spokane, Roeber said he feels remote learning deprives his students of the full experience.

“We really need to be together, ultimately,” he said. “They’re missing the sense of community you get when you play together.”

“I’ve always seen Joel as an exceptional musician and an amazing person to work with,” he said.

Going forward, Roeber said he wants to someday open his own private studio for music lessons. He also wants to keep performing and hopes to make a living that way, sharing his work for people to enjoy.

“Considering how much we use music in our lives to cope with everything, its value isn’t nothing,” he said. “My dream is to create music that will spur positive innovation in some part of society.”