Cougars take on Vikings at Beasley 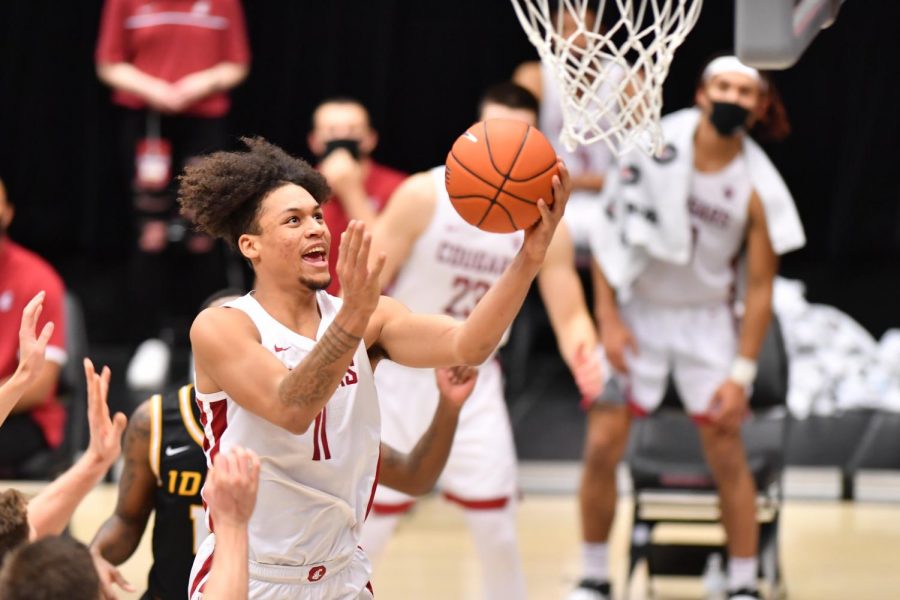 Sophomore forward DJ Rodman has fluctuated from the starting lineup and the bench after the first four games for WSU.

WSU men’s basketball looks to add another win to its record against the Portland State Vikings on Dec. 13, who the Cougars (4-0) have never lost to across seven all-time matchups.

The Vikings (1-1) come off an 88-48 victory against Northwest University, the same university that one of WSU’s previous opponents, Oregon State, beat in an exhibition game Nov. 27.

Although the Vikings played a “road game” against University of Portland. This will be their first game outside the city.

Senior guard Monty Scott is Portland State’s leading scorer after their first two games. Aside from his 14.5 points per game, Scott has shown an impact on the glass – picking up eight rebounds a game.

Senior and sophomore guards Isaac Bonton and Noah Williams each average over five rebounds a game as routine starters. Sophomore guard Ryan Rapp said rebounding efforts need to come from the entire team to outrebound the Vikings on Sunday.

“We just got to make sure that everybody finds a body, and then us guards – because they send four to paint every time,” Rapp said. “One of us guards are going to have to get in there and box out and let the other guy come in and rebound.”

Bonton and Williams have been playing considerable minutes for WSU as the Cougars still try to find answers on offense without former forward CJ Elleby typically leading the team in scoring. Rapp said bench guards like himself know how important their roles are to come in off the bench and give Bonton and Williams rest.

Sophomore forward DJ Rodman has fluctuated not only between the starting lineup and the bench but the position he plays when he is out on the court. Against Idaho, Rodman started WSU at power forward where he finished with five points and five rebounds on 26 minutes played.

Rodman said this position did not change much of what he was able to do on the court. He and freshman forward Andrej Jakimovski were pretty interchangeable between the three and four last games, he said.

WSU’s offense has definitely been shaky these first four games. However, the team’s three-point shooting to this point in the season has been a considerable improvement from last year’s first four games.

Rapp said their opponents throughout the season will likely pay attention to Bonton and Williams more than anyone else on offense. Everyone needs to be ready for kick-out passes from Bonton or Williams and be able to sink the open three to take advantage of defenses.

“We just got to make sure we’re ready and they get us open a lot,” Rapp said. “And they’re always willing to give up that pass.”

Junior forward Aljaz Kunc missed the Idaho game last Wednesday due to an ankle injury, and he did not practice with the team on Friday; his current status for Sunday’s game is doubtful. Kunc was a routine starter before the injury, so fans should expect the same lineup from the Idaho game against Portland State.

The game will tip-off at 2 p.m. Sunday at Beasley Coliseum. Fans will not be allowed to attend, but the game will air on the Pac-12 Network.