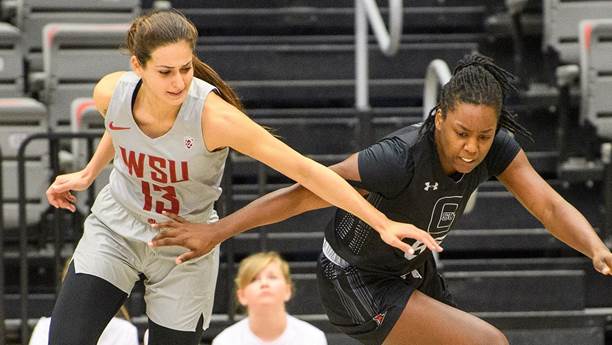 WSU now holds a 27-13 all-time record against the Idaho Vandals after Sunday's win in Beasley.

The Washington State women’s basketball team defeated the Idaho Vandals 74-55 in their home opener on Sunday at Beasley Coliseum.

This was the 40th time in history that WSU and UI have faced off. The Cougars hold a 27-13 all-time record against the Vandals. WSU head coach Kamie Ethridge now moves to 2-1 in home openers as the third-year head coach for the Cougars.

Idaho came into Beasley ranked first in the Big Sky Conference. On the other end of the court, WSU came into their home opener fresh off a win against the Washington Huskies.

“We had a really rough travel day coming back from UW, the [team] tried really hard to get themselves ready and come out with the energy that they needed,” Ethridge said.

The University of Idaho drew first blood with an opening basket from freshman guard Sydney Gandy. WSU responded with two easy makes of their own on back-to-back possessions led by sophomore center Bella Murekatete.

A back and forth first quarter contained a handful of turnovers from both sides and ultimately ended in a nine-to-nine draw.

In the first half alone, there were five lead changes. The second quarter started with a two-pointer from junior forward Ula Motuga, followed by a three-pointer from Idaho. Back-to-back WSU possessions resulted in five points and yet another lead change.

The final lead change of the half sparked a 9-0 Vandal run to give Idaho yet another lead. Idaho wouldn’t relinquish that lead for the rest of the half, despite WSU catching up towards the end. After two quarters, Idaho led 27-23.

Ethridge and the team were not pleased at halftime, as the Cougars were down by four. However, the Cougars take pride on their ability to adjust.

Murekatete provided the first points of the second half, followed by an and-one finish by freshman guard Charlisse Leger-Walker in the next possession. That made for the sixth lead change of the game.

That lead change marked a streak where the Cougars shot a perfect 3-3 from the floor. Idaho kept pace, but the Cougs quickly found themselves pulling ahead with a ten-point lead.

“We knew we needed to come out with a lot more energy. In the first two quarters, we were just flat,” Leger-Walker said.

Leger-Walker scored a career-high 29 points in this game, nine more than she scored in her college debut against UW.

The Vandals cut the lead to five, but the momentum quickly swung back in favor of WSU, and the Cougs ended the third with a 55-41 lead. In that third quarter, the team scored a program-best 32 points, eighteen of which came from Leger-Walker.

“We just got back to the basics,” Ethridge said. “Set good screens, [had] the willingness to do the tough part, the grimy stuff that’s required for you to be successful.”

The Cougars kept this lead for the remainder of the game, and they came out victorious in the 2020 Battle of the Palouse.

“I like this team, I think they have high IQ, they have toughness to them, and we are proving to be better,” Ethridge said.

This win against Idaho marked the first of four home games in a row for Washington State University. Their next opponent will be No. 15 Oregon State at noon Saturday, December 19th. Fans won’t allowed to attend, however the game will air on the Pac-12 Network.