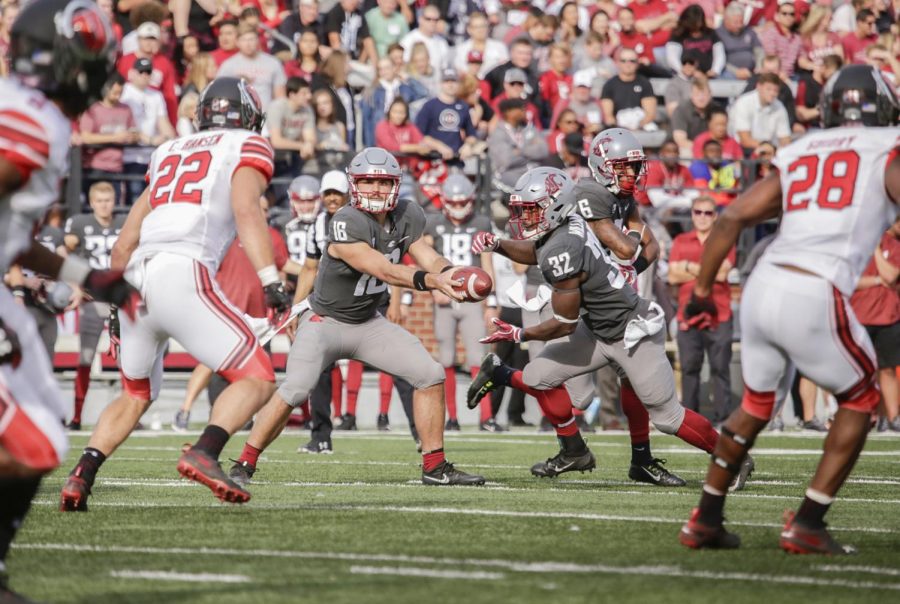 The WSU Cougars football team will end the regular season with a game against the University of Utah Utes at 10:30 a.m. PST on Saturday in Rice-Eccles Stadium in Salt Lake City, Utah.

The game will be the Cougars’ fourth, and final, matchup of the season. WSU head coach Nick Rolovich confirmed that WSU will not accept any potential bowl game invitation, citing the toll the season has already taken on the players due to COVID-19 and game cancelations.

“I think it’s been incredibly hard on these guys,” Rolovich said. “The uncertainty of what’s going to hit next, who’s going to hit what team. I think they all deserve a ton of credit, I’m talking about the players, for getting to this point.”

The uncertainty of the season hit an apex last Saturday when the WSU players were pulled off the field and told the game against Cal was going to be canceled less than two hours before the scheduled kickoff.

“I came out ready to play, came back in we weren’t playing, and next thing I know we got another game,” redshirt senior safety Daniel Isom said.

Rolovich said that the team just wants to play football and is not worrying about any potential poor weather conditions they might encounter in Salt Lake City.

Utah (2-2) played their game last weekend as scheduled and pulled off the 38-21 upset over the previously unbeaten No. 21 Colorado Buffaloes.

The Utes were led by breakout star freshman running back Ty Jordan, who totaled 147 rushing yards just one week after racking up 167 yards on the ground.

The Cougar defense will attempt to slow down Jordan, who is averaging the fourth-most rushing yards per game in the conference with 110.8. The WSU run defense has been the second-best in the Pac-12, only allowing 132 yards per game.

Isom expressed confidence in the team’s ability to slow down the Utes’ offense. He said they are treating Jordan and the rest of the unit the same way they would any other opponent.

“Always respect your opponent, but we’re going to come prepared to play. We’re not going to back down from anybody or worry about anybody specific,” he said. “We’re going to play to our game plan.”

Redshirt senior offensive lineman Liam Ryan said games are won on the offensive and defensive line and that Utah’s defensive line will be a challenge. He said they were a talented group when he played against them two years ago and, despite losing some guys to the next level, are still a solid unit.

“I know they’re stout, they always got some big, tough guys. It’s going to be a battle in the trenches,” Ryan said.

Utah’s best player on the defensive side of the ball is junior linebacker Devin Lloyd. He leads the team with 38 tackles and was recently named a finalist for the Butkus Award, which is given to the best linebacker in college football.

Rolovich said he previously recruited Lloyd out of high school before he chose Utah, and that he was a good athlete with great length. He said the linebacker has put together a great career and has developed into one of the impact players on the Utah defense.

Freshman quarterback Jayden de Laura will still be looking to rebound after struggling two weeks ago against USC. He threw for just 134 yards and two interceptions without a touchdown but Rolovich said last week that the quarterback had put it behind him.

De Laura will be capping off a season that began with him becoming the first true freshman quarterback to start the season opener.

He has thrown for 682 yards, four touchdowns, and three interceptions in just three contests this year. He is also fourth in the conference with 227.3 passing yards per game.

Luckily for the freshman, he will be going up against a Utah secondary that has allowed 251.3 passing yards per game. That figure ranks 10th in the conference and is the most of any of the Cougars’ opponents this year.

De Laura may also have more weapons at his disposal with the return of preseason first-team All-Pac-12 junior running back Max Borghi. He racked up 1,414 total yards and 16 touchdowns last season but has yet to play this season.

The running back appeared ready to play in the game against Cal over the weekend, posting a video on Instagram that showed him in his pads before the game. Rolovich declined to comment on whether or not Borghi was going to be utilized in a full-time role or if they were just going to ease him back into the offense.

“That’s top-secret, classified information that I am not prepared to reveal on Zoom,” he said. “Too many security breach possibilities.”

Redshirt senior running back Deon McIntosh has performed well in Borghi’s absence. He has rushed for 304 yards and two touchdowns and is fifth in the conference in rushing yards per game.

If Borghi does play against Utah this weekend it could give the Cougars arguably the best backfield in the conference. He and McIntosh would provide a substantial challenge to the Utes’ rush defense, which is the best in the Pac-12.