The Cougars have not lost to the Montana State Bobcats at home since 1973; WSU is 23-8 all-time against MSU 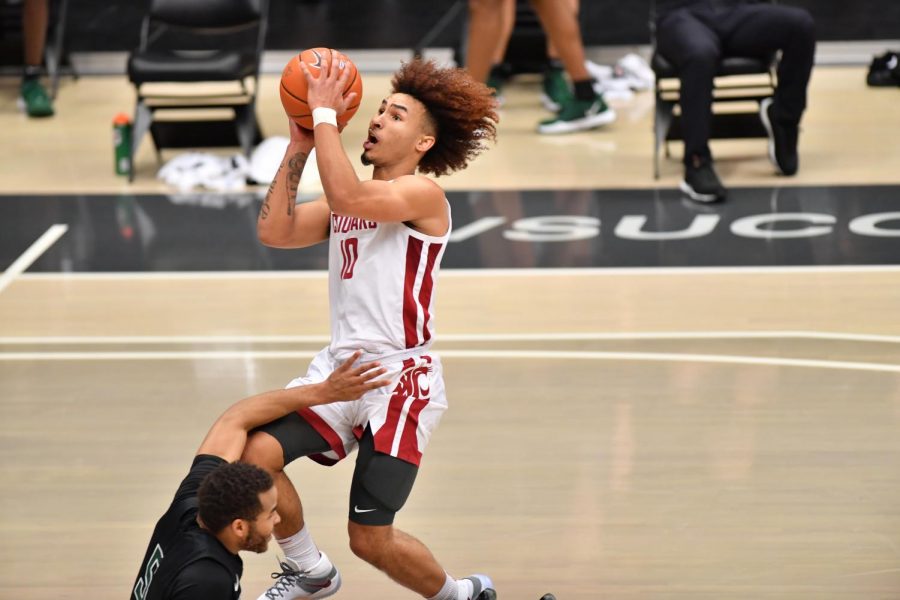 Senior guard Isaac Bonton will play against his former school, the Montana State University Bobcats, at 6 p.m. on Friday.

The WSU men’s basketball team will conclude finals week with a home matchup against the Montana State University Bobcats at 6 p.m. on Friday.

WSU head coach Kyle Smith said practicing the same week as finals has been a challenge, but the team will be fully prepared for Friday’s matchup.

“As a coach you want to work on new stuff, and add some things, but you just hope you can retain what you’ve already done,” Smith said.

This game against the Bobcats is a notable one for senior guard Isaac Bonton. Bonton played for MSU during the 2017-18 season as a freshman when he averaged 7.8 points per game off the bench.

Bonton said after the Portland State game this past Sunday that anytime he plays against a team from Oregon, he doesn’t want to lose. However, Bonton is excited to play against his former school as he still has friends on the Bobcats roster.

“It’s going to be exciting, man. I got some mixed emotions about it,” Bonton said. “It’s another game, it’s another opportunity for a win.”

The Bobcats come off a commanding 114-74 victory over Yellowstone Christian University where six players scored double-digit points for MSU. The Bobcats rank eighth in the nation in three-point field goal percentage at 44 percent and fifth in the nation in free throws made per game at over 20.

Although the offensive production has been a bit inconsistent for WSU so far this season, the other side of the ball has been a completely different story. After just five games, WSU ranks 14th in the nation in opponent field goal percentage at just under 35 percent. At this point in the season last year, WSU contained opponents to a little over 45 percent from the field, and also started the year 2-3.

Sophomore guard Noah Williams has not only become an even better defender this season, but he’s also become one of the main contributors on offense for WSU. Other than a zero-point performance in the season-opener, Williams has scored at least 12 points per game since then.

He averages over 13 points per game from all five games, and he comfortably sits as the Cougars’ second-leading scorer. Freshman forward Andrej Jakimovski said Williams helps him out a lot during practices and he’s a great presence to be around.

“He’s got incredible confidence in himself, and also our teammates,” Jakimovski said.

Sophomore forward DJ Rodman went down with an ankle injury against Portland State this past Sunday after playing just six minutes. Smith said this injury, alongside the injuries for junior and senior forwards Aljaz Kunc and Tony Miller, is indefinite. The closest player to come back from injury is Kunc, Smith added.

Although WSU won both of its games last week, the still undefeated Cougars did not receive any votes for the AP Poll this week. WSU received three votes the week before after starting the season 3-0 which included a conference win against the Oregon State Beavers.

“Hopefully, that’s a reflection of reality,” Smith said. “I don’t think we’re there yet, but I don’t want to be too harsh on our guys.”

If the Cougars win against the Bobcats on Friday, WSU will have its best start to a season since the 2017-18 season when the Cougars went 6-0.