The Cougars hope to get back star senior guard Issac Bonton after he missed last game vs. Montana State 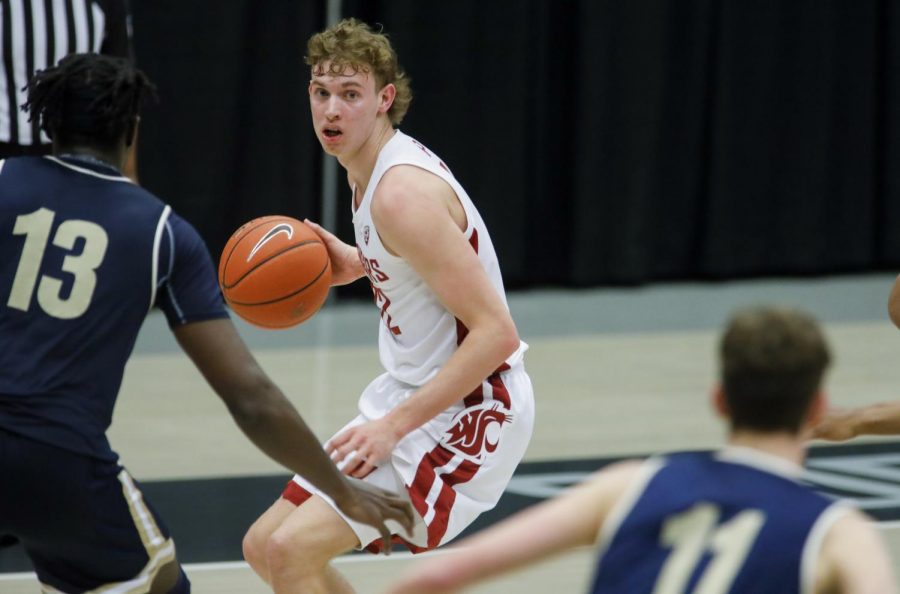 Sophomore guard Ryan Rapp got his first start for the Cougs and scored 12 points against Montana State.

WSU men’s basketball will host the Prairie View A&M Panthers at 4 p.m. Monday in Beasley Coliseum for the first time in almost 20 years.

This will be WSU’s (6-0) second opponent this season from the Southwestern Athletic Conference, the first being the Cougars’ season opener against Texas Southern. Prairie View A&M (1-2) has played WSU just twice all-time, once in 1991 and again in 2001; both meetings resulted in Cougar victories.

However, the Panthers’ top five leading scorers from last season were all seniors who are now graduated and their last game was back in late-November during the 2020 Wade Houston Tipoff Classic.

Prairie View A&M’s most notable players are primarily guards. Not only are the Panther’s top four leading scorers’ guards, but three of them average double-digit points. One of those double-digit scorers, D’Rell Roberts, averages 11.3 points per game while coming off of the bench.

WSU sophomore guard Ryan Rapp had to step in for the injured senior guard Isaac Bonton in the starting lineup last Friday. After going scoreless in his first five games, Rapp put up 12 points and had a career night against Montana State.

Bonton should return against the Panthers on Monday after facing a thigh bruise injury earlier that week. Head coach Kyle Smith said he should be cleared to play, but if not, Bonton will return on Wednesday against Northwestern State.

Rapp will likely play from the bench if Bonton returns on Monday, so Rapp will have somewhat of a considerable role against Roberts off the bench.

“It sucks that Isaac wasn’t able to be out there,” Rapp said. “Hopefully, we get him back [against Prairie View A&M].”

After six games for WSU this season, the Cougars now rank fourth in the nation in opponent field goal percentage at just 33.5 percent allowed. This stat, along with a few other top-20 defensive team stats, shows that WSU has locked down every opponent’s offensive game plan thus far.

On the other hand, WSU’s offense has been a bit of a question mark this season. The Cougars’ last game against the Bobcats was easily their best offensive outing yet, scoring 46 points in the first half alone.

The Cougars’ momentum quickly died out in the second half when they had multiple scoring droughts. Smith said this hiccup in momentum wasn’t a glaring issue to him, but instead, it was some of the team’s coverages on three-pointers.

“[The Bobcats] made some long threes that I thought we could’ve contested better. We finally just said, ‘You know what? We’re going to play big and play zone,’ and that seemed to help us a lot,” Smith said on the Cougars defensive strategy.

Defense has consistently been one of Smith’s three ‘pillars’ since joining the program last season. Ball control and rebounding take up the remaining pillars, and WSU outranks Prairie View A&M in both turnovers and rebounds per game.

ESPN listed WSU as a 12-point favorite heading into Monday’s game, the Cougars’ largest point-spread since 19.5 points against the Idaho Vandals on Dec. 9.

This is the Cougars’ first 6-0 start since the 2017-18 season. The most consecutive wins to start out a season in WSU history was during the 2007-08 season when the Cougars went 14-0. WSU has a chance to reach the halfway point of that milestone against Prairie View A&M.

Tip-off between the Cougars and Panthers will be at 4 p.m. on Monday at Beasley Coliseum. Fans will not be allowed to attend, but the game will air on the Pac-12 Network.