Women’s hoops falls to No. 8 Oregon

WSU suffers loss to No. 8 Oregon; Cougars look to rebound against Eastern Washington on Dec. 22 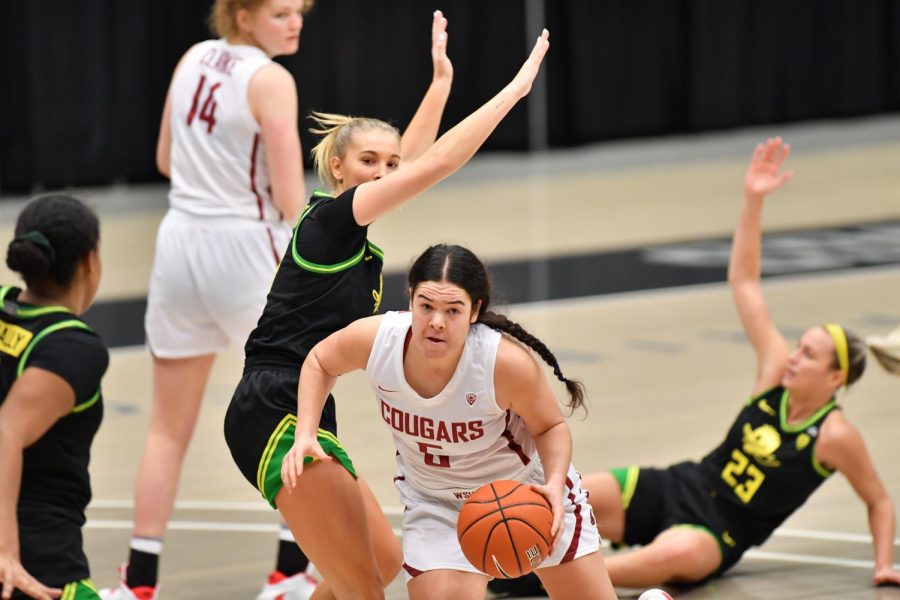 The WSU women’s basketball team lost to the No. 8 Oregon Ducks 69-65 on Dec. 21 in Beasley Coliseum.

The Cougars (3-1, 2-1) came off of their first win against a ranked opponent since 2017 when they took down the No. 21 Oregon State Beavers on Saturday.

The undefeated Ducks (6-0, 4-0) have dominated opponents all year long with their high scoring offense, while the Cougs have held all of their opponents in check with a strong defense so far this season.

Ula Motuga scored the Cougar’s first points with an easy layup, putting her team up one.

“We showed that we can compete,” redshirt senior Krystal Leger-Walker said.

The Ducks struck first to start the second quarter, but the first three-pointer of freshman Jessica Clarke’s collegiate career swung momentum back in favor of WSU.

WSU moved the ball extremely well against the Ducks, but in the second quarter, Oregon wasn’t breaking.

Oregon allowed the Cougars to move the ball down the court, then used their height advantage to block Cougar attempts at a basket, as they finished with a team total of seven blocks.

“They had some great height and great outside game,” Leger-Walker said.

WSU picked it up late in the half, as Clarke and sophomore Emma Nankervis presented a strong presence inside the paint.

This helped to set up a late three in the final seconds by sophomore guard Johanna Teder to give the Cougs a 37-32 lead going into the halftime break.

“We played forty minutes of good basketball in this game,” head coach Kamie Ethridge said. “If we had played thirty minutes, we would be down by fifteen.”

Oregon slowly chipped away at the WSU lead, putting together scoring possessions of their own, and started forcing WSU to make mistakes.

The score was 50-49 going into the fourth quarter after Clarke gave the Cougars their lead back to end the third quarter.

The last quarter of action started with a swat by Motuga that sent the ball into the front row of cardboard fans, but Oregon quickly regrouped and gained a one-point lead.

It was a back and forth final quarter. As soon as one side scored, the other would drive down the court and put-up points of their own.

As the final seconds ticked down, Oregon held onto a one-point lead, and more importantly the ball.

An aggressive corner three by the Ducks gave Oregon a two-possession lead with 34 seconds left.

The Cougars responded with a three by Leger-Walker, cutting Oregon’s lead to one point with 24 seconds left.

The Cougs fouled their way into giving Oregon two free throws, with only one of them going in.

Ethridge took her last timeout as Oregon led by two. Washington State got the ball back with 21 seconds, and a chance to force overtime.

Time resumed, and Oregon was swarming on defense. Nearly every Cougar touched the ball, but with one second left, a corner three by Motuga was no good.

The Cougs were forced to foul, and last second scores handed Oregon their sixth win of the year by a final score of 69-65.

Despite the loss, Ethridge is choosing to remain optimistic.

“This is a statement game,” Ethridge said. “To be able to go toe to with Oregon, it shows that this isn’t just a fluke team.”

WSU will look to rebound on Dec. 22 against the Eastern Washington Eagles. The game tips off at noon in Beasley Coliseum and can be live-streamed through the WSU Athletics website.