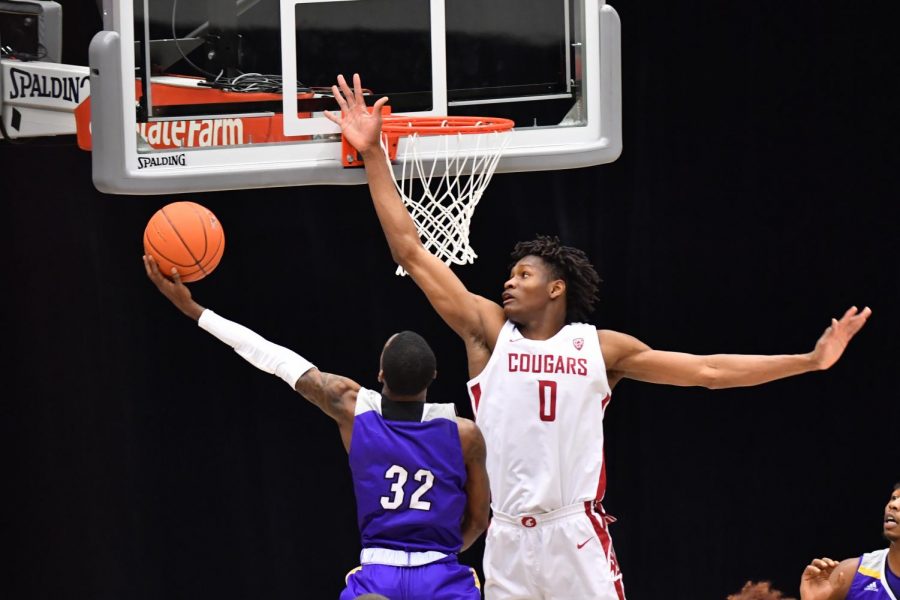 After a great offensive performance in their last game, WSU men’s basketball have outdone themselves against Prairie View A&M. WSU (7-0) continues its undefeated season with a 90-62 victory over the Panthers (1-3) after another great performance from freshman center Efe Abogidi.

Abogidi led the Cougars in points, rebounds, blocks, and free throws made. His 16 points and 14 rebounds marked his second game in a row with a double-double.

Alongside his four blocks on the night, Abogidi only had two personal fouls; he previously averaged three per game. He said he’s definitely developing a better grip on how to contest shots and passing lanes.

“I feel like it’s definitely getting easier for me now and getting to understand how college basketball works,” Abogidi said.

Over a third of WSU’s 90 points came from the three-point line as the Cougars made a season-high 13 threes in the win. This is the most threes made by WSU during the Kyle Smith era.

Junior forward Aljaz Kunc said the team’s shooting performance came from the playmaking from the guard position. The plays led the team to make the open shots they were given, he added.

“We’ve been working on our three-point shooting in practice,” Kunc said. “It was just a matter of time to knock them down.”

Kunc made three three-pointers of his own against Prairie View A&M, tying his career-high. Kunc, who played just five minutes against Montana State after coming back from an injury, played 15 minutes during this game and said his ankle is feeling healthy and he’s ready to play.

Five different Cougars scored double digits against the Panthers, including 12 points from senior guard Isaac Bonton, who returned to the starting lineup after missing the last game with a thigh bruise. Bonton led the team with seven assists and shot just below 50 percent from the field.

Sophomore center Volodymyr Markovetskyy was the only starter to not have double-digit points, but he still had a productive night. He finished with nine points, five rebounds, and had zero fouls or turnovers.

WSU head coach Kyle Smith said the starting lineup the team used tonight is one that he likes a lot heading into a conference schedule.

“I think that’s a good Pac-12 look there,” Smith said. “We still got some guys that are injured that can help too – with DJ [Rodman] and Tony [Miller].”

WSU never trailed throughout the entire game. In fact, after gaining an 11-point lead with 10:43 left in the first half, the Cougars didn’t give up a double-digit lead for the remainder of the game.

The first half was simply a one-sided battle of three-pointers. The Cougars achieved a new season-high in first-half three-pointers with eight. Meanwhile, the Panthers made just two threes off 12 attempts.

WSU led 47-30 at the half and the duo of Bonton and Abogidi collectively put up 18 points, while freshman forward Andrej Jakimovski added 11 points of his own. Jakimovski would finish the game with this point total, marking the fourth game in a row for him with double-digit points.

WSU also had new season highs in rebounds at the half as well. The Cougars pulled down 27 rebounds and constrained the Panthers to just 11 rebounds. Nine of WSU’s 27 rebounds came from Bonton and Abogidi.

Smith said the team wanted to focus on two elements in this game: avoiding pressure on defense and rebounding their own misses on offense. The team did a great job of the latter in the first half, Smith said.

“This is a ‘take care of the ball’ scout, and make sure that we get some extra opportunities,” Smith said.

The Cougars picked up right where they left off in the second half by scoring 12 points in the first six minutes – eight of which came from sophomore guard Noah Williams, who finished the night with 13 points, the second-most on the team.

Despite multiple comeback attempts from the Panthers, WSU gained a 20-point lead with eight and a half minutes left in the game. The Cougars held at least a 20-point lead for the remainder of the game.

WSU will conclude its non-conference schedule against the Northwestern State Demons at 2 p.m. Wednesday at Beasley Coliseum. Fans will not be allowed to attend, but the game will air on the Pac-12 Network.