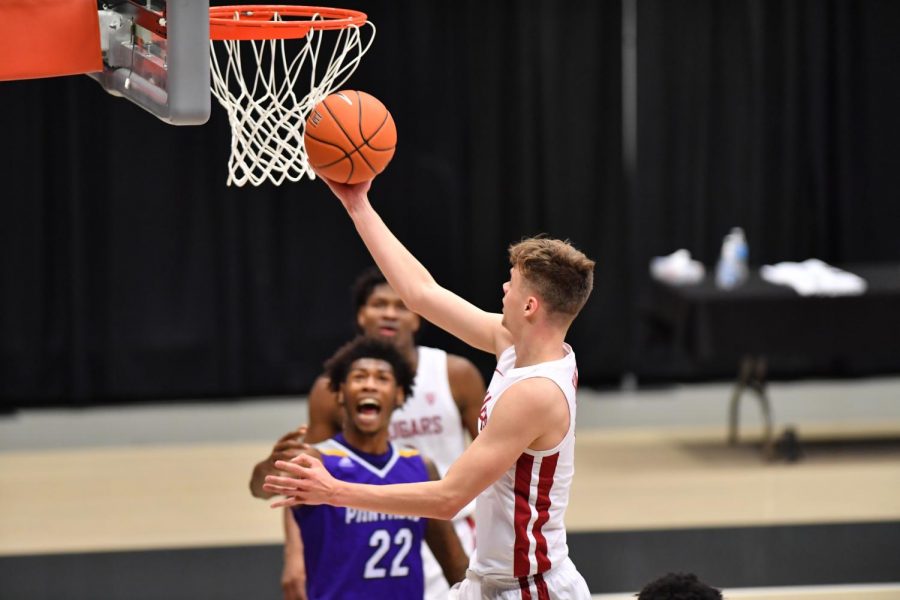 The Cougars look to stay undefeated in their next matchup against Northwestern State.

The Cougars will finish out their 2020-21 non-conference schedule against the Northwestern State Demons at 2 p.m. Wednesday at Beasley Coliseum.

WSU (7-0) remains atop the Pac-12 standings as the number one seed and the only undefeated team in the conference. In fact, the Cougars are one of just 29 Division I teams in the nation to remain undefeated to start the season.

This seven-game winning streak is also the longest running streak to start out a WSU season since the 2007-08 season, when the Cougars achieved a 14-0 run.

WSU and Northwestern State (1-8) have never played each other, so Wednesday’s matchup will be the first in history. The Demons come off a loss to the No. 1 Gonzaga Bulldogs on Tuesday, after a 95-57 loss on Monday to the same team.

That’s right, the Demons will play their third consecutive game for the third consecutive day on Wednesday. WSU head coach Kyle Smith acknowledged this reality in his post-game presser on Monday following the win against Prairie View A&M.

Smith said he is the only coach he knows of that has lost to a team playing on a third consecutive day despite being fully rested.

“I will be at my best,” Smith said. “They’ll be loosey-goosey, and we got to make sure we stay focused and we play about us; playing the way we need to play.”

The Demons lone win this season was against a non-NCAA team in Champion Baptist College. The closest margin of loss for Northwestern State was six points to the Texas Christian University Horned Frogs.

The Demons’ leading scorer is starting senior guard Jairus Roberson, who averages a little under 11 points per game. He achieved his season high in points on Dec. 6 with 22 and scored 15 in his last game against the Zags.

WSU’s defense this season has constrained opponents to just 34 percent shooting from the field, which ranks fifth in the nation. However, the Cougars have shown signs of fatigue in second half defense these past few games. Granted, WSU has led by 20-plus points at halftime in the past two games.

Junior forward Aljaz Kunc said holding Prairie View A&M to 62 points on Monday was too high. The team needs to bounce back defensively in order to finish the non-conference schedule on a high note, he added.

“Defense is our identity,” Kunc said. “Keep building on what we’re doing right now, stay sharp on defense, get the ball moving on offense, get extra shots, get nice looks, and everything is going to take care of itself.”

The likely starting center for Northwestern State on Wednesday will be freshman center Kendal Coleman. Coleman leads the team in rebounds per game with just under eight per game, however the closest teammate to that stat averages less than five. But the key stat comes from the other side of the boards as the Demons give up around 44 rebounds a game to their opponents, among the worst in the nation.

WSU torched Prairie View A&M on the boards in the first half alone on Monday but ended up finishing the game with a total of almost 50 rebounds. Freshman center Efe Abogidi, who will most likely cover Coleman in Wednesday’s game, said he’s not sure what’s been clicking lately with scoring but the team is obviously showing some real numbers in that regard.

“I see the ball, I just go get it,” Abogidi said. “I don’t really think too much about it.”

Abogidi has had a double-double in each of the past two games, and it’s safe to say he’ll likely have another against the Demons.

According to ESPN, WSU currently sits as a 16-point favorite over Northwestern State on Wednesday, the second largest spread of the season for WSU.

The game tips off at 2 p.m. Wednesday at Beasley Coliseum. Fans will not be allowed to attend, but the game will air on the Pac-12 Network.