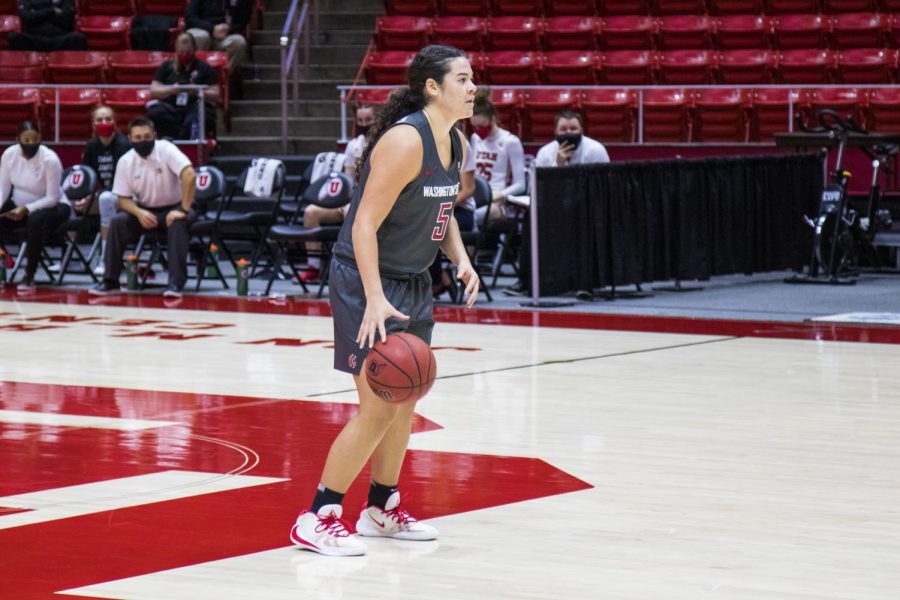 Freshman guard Charlisse Leger-Walker dribbles the ball up the court.

The Washington State women’s basketball team defeated the University of Utah 79-74 on Jan. 1.

The New Year is upon us, but for WSU women’s basketball that means it’s back to the grindstone. The team’s festivities were cut short, as their holiday break came to an end when they traveled to Salt Lake.

WSU won the opening tip-off, but it was Utah that scored the first four points of the game.

Bella Murekatete scored the first bucket for Washington State with an easy layup, followed by a two-pointer by the Pac-12 Freshman of the Week Charlisse Leger-Walker, who tied the game at four.

It was evident that both sides were coming off of a much-needed break. Missed shots and sloppy possessions from both schools resulted in a physical first quarter.

A layup by Bella Murekatete gave WSU their first lead of the game, 15-14 with three minutes left in the first quarter.

A corner three by Utah at the buzzer ended the first quarter, tying the game at 20 apiece.

Utah scored first in the second quarter, then a no-look pass from Krystal Leger-Walker to Ula Motuga tied it back up.

Murekatete was dominant, putting up 13 points in the first half alone.

Back-to-back triples by Charlisse Leger-Walker gave WSU a two-possession lead, forcing Utah to use their first timeout and regroup.

Both teams left points on the court in the first half, but at the end of the second quarter, a buzzer-beater by Grace Sarver gave WSU a 44-38 halftime lead.

WSU received the ball to open up the second half, and a Utah foul gave Murekatete the opportunity to extend their lead to seven.

The Cougars capitalized on the opportunity, and soon enough they found themselves with a ten-point lead in the third quarter.

That ten-point lead quickly grew to a thirteen-point lead, then sixteen points, as WSU started to pull away.

The Cougars outscored Utah fifteen to five in the first eight minutes of the third quarter, and the frustration by the Utes’ bench was evident.

Back-to-back buckets by Utah cut WSU’s lead to twelve, and at the end of three, the Cougars maintained a comfortable 62-50 lead.

The last quarter began with a three-point play by Utah, cutting the WSU lead to nine.

Utah took away WSU’s momentum and built an 11-0 run until Charlisse Leger-Walker made a handful of free throws.

With six minutes left in the game WSU had a ten-point lead, but just couldn’t manage to put Utah away.

“There are some things that this team is going to have to do better,” Ethridge said.

As soon as Washington State would score, so would Utah. Both sides were capitalizing on the other’s mistakes.

In the final minute, Utah cut the lead to six, with enough time to score twice.

Three free throws by Utah cut WSU’s lead down to three, with time left on the clock.

WSU got possession and received a foul, sending Cherilyn Molina to the line for two shots, both of which she made.

Ethridge praised the defense all year, but this time it was the offense that shined bright, as the team scored a season-high 79 points on the Utes.

Charlisse Leger-Walker led the Cougars in scoring with 23 points, and Bella Murekatete scored a career-high 16 of her own.

“I couldn’t be happier with where we are, and how we competed,” said Ethridge.

The Cougs have a quick turnaround, as they will be traveling to Colorado to take on the Colorado Buffaloes on Sunday, Jan. 3 at 11 a.m.