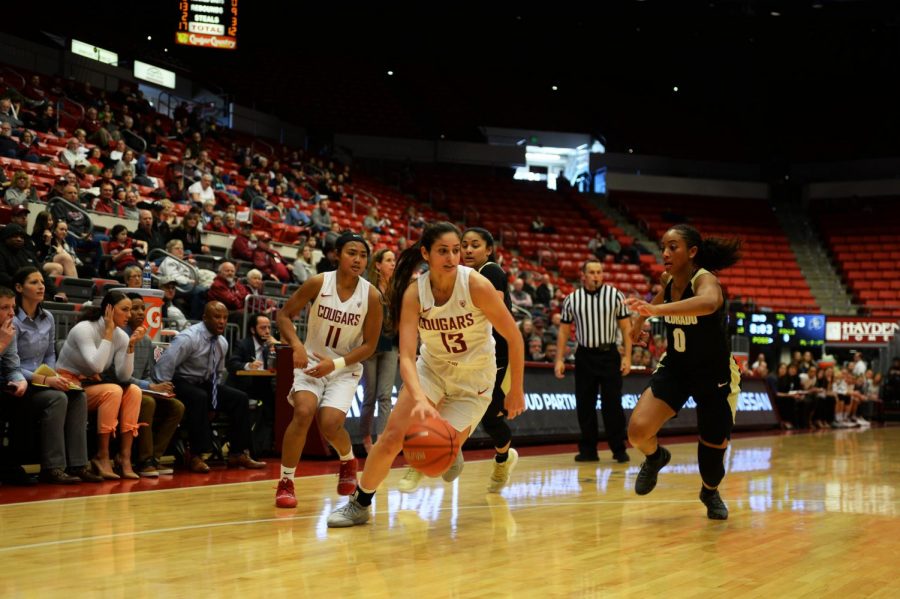 Then-freshman forward Shir Levy drives in for a layup early in the game against Colorado on Jan. 13, 2019 at Beasley Coliseum.

The WSU women’s basketball team will travel to Boulder, Colo. to take on the University of Colorado Buffaloes on Jan. 3 at 11 a.m. PST.

Washington State is no stranger to quick turnarounds, as the team already played three games in a four-day span earlier in the season. However, those games were at home, and now the Cougars will be tested as they will play another away game with only a day of rest after their win against Utah.

Washington State scored a season-high 79 points against the University of Utah, and sophomore center Bella Murekatete scored a career-best 16 points in the contest.

Junior forward Ula Motuga also scored 16 points, which matched her career-high. Freshman guard Charlisse Leger-Walker had her fourth 20-plus point game of the season, tallying 23 points to her name against the Utes.

“We’re going to get someone’s best efforts against Charlisse every night,” head coach Kamie Ethridge said. “She is a hard one to stop because she is so multi-dimensional.”

But Utah did manage to expose Washington State’s defense, which ironically has been the strong suit of the Cougar’s team so far.

The 74 points that Utah scored is the most that any opponent has scored on the Cougars all season.

“I don’t think we did a great job at finishing the game,” Ethridge said.

Against Utah, WSU allowed a 15-5 run in the final minutes, which allowed the Utes to cling to life in the fourth quarter. However, WSU did escape with the win in the end.

Interestingly, earlier in the year Colorado blew out Utah, 80-50, a team that WSU just sneaked past, yet lost to Oregon State and Oregon by double digits. WSU played arguably their best basketball against both Oregon schools.

Colorado has held a team to 50 or fewer points four times this season, and Ethridge plans on preventing that number from increasing to five.

“I think we’re showing the signs of having some good [offensive] weapons,” Ethridge said. “I don’t think we’re a surprise anymore.”

Leger-Walker has also earned two Pac-12 Freshman of the Week honors already this season, and it would not be shocking if she earns herself more hardware as the year continues.

On Monday, the Pac-12 Network Washington picked up the next five Washington State women’s basketball games. Three of these will be away, with two games being broadcast from Beasley Coliseum.

This will be the first game that will be televised on the Pac-12 Network Washington. The game will tip-off on Jan. 2 at 11 a.m. PT from the CU Events Center in Boulder.