Sisters Krystal and Charlisse Leger-Walker led the Cougars with 23 and 18 points, respectively 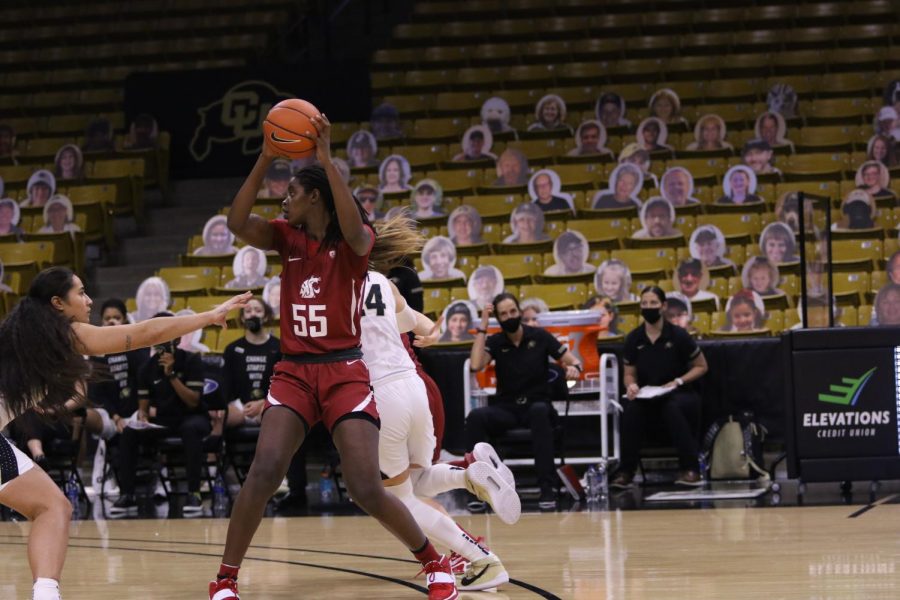 COURTESY OF UNIVERSITY OF COLORADO ATHLETICS

Sophomore center Bella Murekatete holds the ball at the top of the key against Colorado on Jan. 3, 2021.

The Cougars have not started a season 6-1 in over fifteen years. Sitting at 5-1 (3-1) after the team’s win over Utah, the Cougars looked to change that Sunday.

WSU won the opening tip-off, and the game started with a missed triple by redshirt senior guard Krystal Leger-Walker, who returned to the state where she played her first three years of college basketball at the University of Northern Colorado.

A three-point play by Colorado provided the first points of the game. Then, sophomore center Bella Murekatete picked up right where she left off against Utah, scoring the first four points for the Cougars.

The Buffaloes held an 8-6 lead at the first timeout, which allowed for the first substitutions of the game. Four players came off the bench for Colorado, and that triggered an 11-0 run by the Cougars to end the first quarter with a 15-8 WSU lead.

To begin the second, Murekatete scored an easy layup, extending WSU’s run to 13-0.

Another score by the Buffs shifted the momentum. WSU struggled to maintain a rhythm against Utah, and that flaw was rearing its ugly head again.

A 5-0 Colorado run was quickly snuffed out by back-to-back steals and scoring drives by WSU.

The Cougs shot 48 percent from the floor in the first half, compared to the Buffaloes shooting 28 percent. This helped WSU build a 33-22 lead going into half.

The University of Colorado scored on their first possession of the second half, cutting the WSU lead to single digits.

Colorado did not allow WSU to attempt a free throw in the first half, a trend that continued into the third quarter. However, WSU didn’t need the penalty points, as they were able to extend their lead back to double digits without the help of a Colorado foul.

Krystal Leger-Walker was the first WSU player to score double-digit points, as she took the first free throws of the game for the team.

The third quarter in Boulder ended with back-to-back scoring possessions by both schools and a 52-41 Washington State lead.

The final quarter of action featured WSU’s first double-double of the season, as junior forward Ula Motuga tallied her 11th rebound to compliment the 11 points she had tallied throughout the first three quarters.

Krystal Leger-Walker fouled out in the final minute, and a free throw by Colorado chipped away at WSU’s lead once more.

As the clock hit double zeroes, WSU progressed to 6-1 for the first time in sixteen years.

It was Krystal who led WSU in scoring with 25 points on the day, while younger sister Charlisse tallied 16 of her own.

The Cougs will look to keep rolling on Jan. 8 when they host the Arizona Sun Devils in Beasley Coliseum. Tip-off will be at 4 p.m. on the Pac-12 Network Washington.