Senior forward Isaac Bonton leads the team in scoring and assists with 17.1 points and 3.5 assists per game 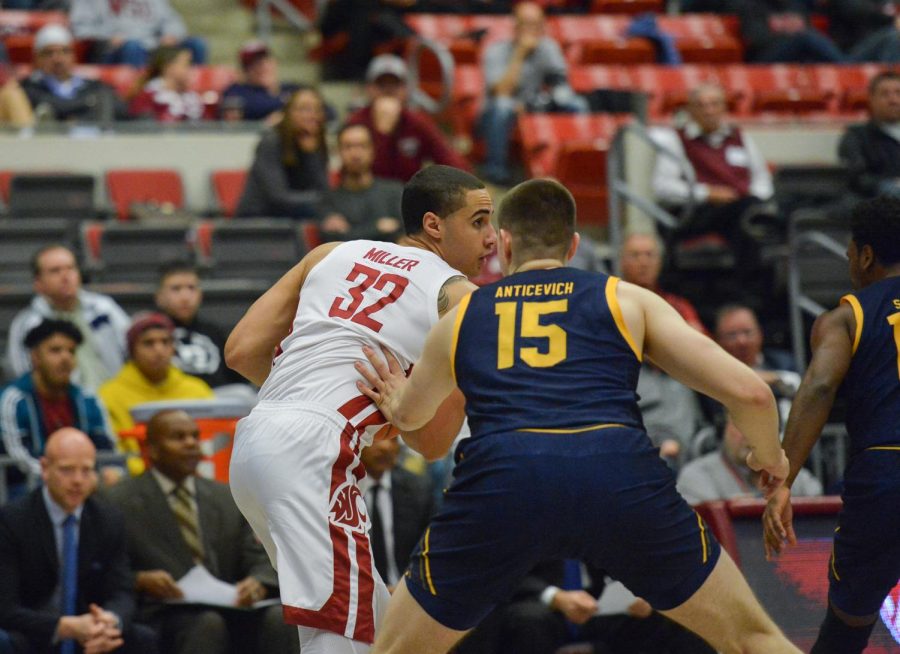 After the Cougars’ eight-game winning streak came to an end last week, WSU (8-1, 1-1) now goes on the road for the first time this season to face the California Golden Bears at 7 p.m on Jan. 7 at the Haas Pavilion in Berkeley, Calif.

WSU Head Coach Kyle Smith said in his weekly press conference that the team is excited to get back out on the court following their double-overtime loss to Arizona last weekend.

“Coming off an obviously tough loss, we want to give our guys the opportunity to win,” Smith said. “We’re looking forward to getting down to the Bay.”

Both Smith and senior guard Isaac Bonton said the meat of the team’s issue last Saturday against the Wildcats was free-throw shooting. Smith said the team went through a rigorous “free-throw rehab” in order to get their players tuned in for shooting from the foul line against Cal (5-4, 0-4).

Out of the four Cougars who missed the game against Arizona due to COVID-19 protocols (sophomore center Volodymyr Markovetskyy, sophomore guard Ryan Rapp, sophomore forward DJ Rodman, and redshirt freshman forward Brandton Chatfield), Smith confirmed that Markovetskyy has returned to practice this week.

Cal ranks second-to-last in the Pac-12 standings and has lost its past two games. On top of the Golden Bears’ struggles, the team’s premier scoring guard, junior Matt Bradley, went down with an ankle injury in their game against Oregon State last Saturday. Bradley came out of the locker room in the second half with a walking boot, and it’s unlikely he will participate on Thursday against WSU.

Cal’s second-leading scorer, senior forward Grant Anticevich, had an appendectomy a little over two weeks ago, so his appearance on Thursday is thrown into question as well.

Bradley and Anticevich combined for 38 points in Cal’s home game against WSU last season, so the potential absence of both players will certainly be an advantage for the Cougars in their first road game of the season.

Bonton and sophomore guard Noah Williams have been the focal points of WSU’s backcourt this season and they are bound to have a standout performance against a possibly shorthanded Cal team. Bonton had a turnaround performance against Arizona as he tried to bring the team back into the game in the second half.

However, free-throw struggles from Bonton, as well as from the rest of the team, resulted in a loss for WSU. Bonton said he knows he can go out and score when he needs to, but he’s more focused on orchestrating the team on offense above all else this season.

“I have [the] scoring ability, but I’m taking a little bit of different route this year. I’m trying to learn how to be a senior leader,” Bonton said. “Just get out there and get guys going, just play with pace, I’m still learning.”

Rebounding is another aspect of the game in which WSU is on track to overwhelm Cal. WSU comes in as the second-best rebounding team in the conference, while Cal ranks 11th.

In fact, Cal has just one player that stands at least six-foot-ten, sophomore center Lars Thiemann, who averages less than four rebounds a game. Bradley and Anticevich both average more rebounds per game than Thiemann.

WSU has a total of four players who stand at least 6-foot-10-inches, three of which will likely play on Thursday.

Smith said Cal does one thing very well and that’s competing on both ends of the floor. Cal has multiple different ways they can beat a team and the second matchup last season was taking advantage of the paint.

Now with WSU having the size advantage and the consistent defensive play, Smith said the Cougars need to stay attentive to what the Golden Bears are running on Thursday’s game and attacking their weaknesses.

“It’s beating a system. If you beat them, you’re going to have to beat what they do, and that’s a challenge.”

ESPN has Cal listed as a one-point favorite for Thursday’s matchup, which is the closest spread of any WSU game this season. The late-night game will air on the Pac-12 Network at 7 p.m.